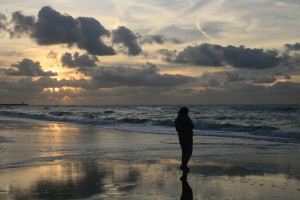 My dad was always a dreamer. After the rest of us would meander off to bed, dad would stay up nursing a beer, while coloring the air a smoky blue with the consecutive Marlboro’s that hung from his lips. Besides filling up his ashtray with spent butts, he’d also fill up sheet, after yellow sheet of legal paper. Strange geometric designs would serve as nuclei for a burst of lines resulting in Fourth-of-July firework-like images. At the end of each emanating tendril, a word would appear that represented some dimension of a concept that had occurred to him. We would only know of my dad’s late night vision quests because of these left over paper artifacts, with their exotic hieroglyphics, strewn all over the breakfast table.

On a night like this, I always wondered what it would be like to take a Jules Verne type of fantastic journey inside of my dad’s imagination. There, I would expect to find the original dazzling forms that inspired my dad’s legal-pad fireworks displays. Against the backdrop of his vast imagination, I would encounter an original vision appearing like an ascending firework embryo. Once the vision started to unfold, I imagined that several other images would spring out of it like a brood of colorful spiders simultaneously bursting from their egg sacks. Once exploded, some would connect to form patterns, and others would fade away like the smoke-footprint of a spent Fourth of July grand finale. I always imagined that his racing hand, furiously scratching on a pad, was attempting to capture something fleeting that would be forever lost without these strange sunburst-like runes.

Sometimes these legal pad sessions led to dreams that were just too goofy to inspire any kind of action at all. Other dreams that seemed nutty at first, actually worked. Filling in our city backyard with enough concrete to simulate a small basketball court seemed like a silly idea until every kid in our neighborhood wanted to come over and shoot hoops with us. Some of dad’s dreams put food on our table. Others took food away.

Unlike my dad, I was never a prolific dreamer. In my life, I can count on one hand the dreams that I simply knew were supposed to take shape in this world. In the 1980’s I experienced Saint Ignatius’ thirty-day silent retreat. During the week that Saint Ignatius recommended meditation on God’s love, a persistent image kept showing up in prayer. I kept seeing my head resting on Jesus’ right shoulder, while a woman, whose hair resembled Lisa’s dark mane, rested on his left. I didn’t know what to make of it until a spiritual director, who heard this story years later said, “Do you think it’s possible that God might be calling you to get married?”

Like Ebenezer Scrooge, it would take more than one dream sequence to stir this doubting Thomas into action. Each Sunday, for nearly a year, I sang in the choir next to the unmarried version of Lisa. On those occasions, I would hold her hand during the “Our Father.” Little-by-little, I became aware of a persistent image during these episodes that I couldn’t shake. Whenever I closed my eyes to pray the Lord’s Prayer, I kept envisioning Lisa in a wedding dress standing next to me. A later retreat would confirm this image, by adding Lisa-like, dark-headed children to the image. Having been sufficiently bludgeoned by these divine two-by-fours, I finally got around to abandoning a fixation on priesthood and asked my future wife if she would date me/marry me. She responded with a bewildered, “Yes,” (to the first question) and “Not yet…maybe later” (to the second question).

This Sunday’s Gospel (Matthew 1: 18-24), introduced us to a dreamer. Joseph, started out with the kind of conventional dreams that most men have when they launch their adulthood. He would get married, run a carpentry business, raise some kids, and live a devout Jewish life. Earlier in Advent, we saw how this dream was interrupted by the heart-breaking news of a pre-nuptial pregnancy. Joseph quickly constructed a new dream in which he would quietly wed and then divorce Mary to insulate her from bloodthirsty, cruel interpretations of the law.

But like his namesake, way back in Pharaoh’s court, Joseph started dreaming in amazing Technicolors. First, he was given dreams about a life with Mary that involved adoption of a special needs/gifted son. As if that wasn’t enough, his Technicolor dreams began stretching and expanding, like the belly of his pregnant wife. His dreams pulled him out of his comfort zone and turned him into a man of action. His action plans included illegal immigrant status in a foreign land (i.e. Egypt). The dreams God dreamed within him led to action, not just for the sake of his little family, or his big tribe. The dreams Joseph was given to act upon, had expanded until that young carpenter was risking his life and livelihood for the whole human race…including you and me.

Are you like my dad who takes the time to continually visit and revisit your dreams? Are you more like me, where God has to really knock you over the head to make you pay attention to your own dreams and visions? Or are you like Joseph, listening with sensitivity for that intersection where your dreams and God’s desires flow into a confluence? There is a kind of audacity embedded in spirituality. It goes something like this: the God of all creation wants to have direct communication with you and me. In a world filled with God’s presence, everything has the power to communicate divinity. Coincidences like music that suddenly matches the themes of your thoughts may be coming at you with a divine smile. Serendipitous phone calls can raise the suspicion of a divine link with an old friend. And yes, even dreams themselves might carry with them the hint of a divine fingerprint asking you, like Joseph, to get up and get going. When was the last time you manifested the courage to ask God to dream His dreams in you?