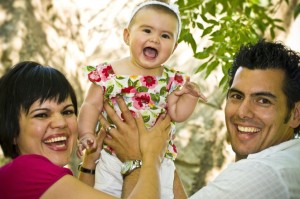 Twelve years ago, my little brother Danny and his wife, Lisa, learned that their several-years-long effort to conceive a child had finally paid off. In fact, you might say that they hit an obstetrical jackpot. The lab tech’s imaging wand revealed that two boys and a girl had set up camp in my sister-in-law’s cozy little womb. After this trio made their premature entry into the world, less than two years later, a fourth little bundle of joy filled another crib in Danny and Lisa’s nursery.

During that period of history in which my sister-in-law was incubating her fourth child and she and my brother were still adjusting to life with triplets, my little family went to visit them in Chicago. At one point during the weekend, my wife took our kids to visit her college roommates, leaving me to visit with Danny and Lisa. In the course of our conversation, Danny divulged that it had been more than a year since the two of them had gone on a date. I convinced them to seize the moment. Mercifully, they timed their outing to coincide with the triplet’s naps. The trouble was that these little people came to consciousness long before their parents were due to arrive home.

After a little deep-breathing, I reasoned that if my little brother Danny could do this, somehow I could manage to keep these three little souls attached to their bodies until their mom and dad came home. The first task involved changing the diapers of three wide-eyed babies who had come to understand that, while I resembled him, I was only a cheap imitation of their father. After successfully outfitting them, I decided that a change of scenery might help them to forget their misgivings about their uncle.

I felt like Lucille Ball in the candy conveyor belt episode. I packed their triplet stroller with sipping cups and snacks, and prepared to make the transfer. Getting a set of triplets into a three-way stroller involves leaving two children unattended indoors while loading up one sibling out in the garage. Next, the little fella in the garage had to entertain himself all alone, while I returned to the previously unattended duo indoors. As the middle child was transported out to the garage to keep his brother company in the stroller, I just hoped that the little girl, left alone in the house, had not contacted DFS for child abandonment.

Finally, all three kids were locked and loaded. We launched our walk. My aim was to lull them back to sleep. The thought that continually banged around in my head as the carriage banged over the uneven cracks in the sidewalk was, “How does my brother do this everyday?” The simplest tasks required forethought, coordination, and unbelievable amounts of energy. It occurred to me that God had provided adaptations for animals that had grown accustomed to bearing litters of offspring—like multiple milk dispensers on their mothers’ undersides. In this case, it would be helpful if the Good Lord in His mercy would sprout extra sets of hands and arms on all human parents of multiples.

This Sunday’s Gospel (John 2: 1-12) found Jesus performing his first public miracle. In this famous passage, he turned water into wine. I don’t think it was an accident that this signature first miracle took place at a wedding. It seems to me that Jesus was sending the message that in some very real ways, the vocation of marital and family life involves daily miracles that are the equivalent of turning water into wine.

My brother Danny’s circumstances have provided a clear example of this. In the ensuing years, since their triplets were babies, Danny and Lisa came to notice developmental issues that eventually led to diagnoses of autism in one child, and other, less severe, but nonetheless real diagnoses (PDD Spectrum) in the other two. The treatment for these disorders involved constant contact, stimulation, training, almost round-the-clock therapy, dietary experimentation, blood, sweat, tears, prayer—in short, the grace of God just to keep one foot walking in front of the other.

When I hang out with Danny’s family these days, I get to see, firsthand, the fruit of their collaboration with God. Their little girl will chat up anyone who cares to talk about her singing exploits, the merits or deficits of this year’s Christmas presents, or anything else a thirteen-year-old girl would care to discuss. Their autistic might reprise a song he has performed in a Christmas play, or proudly show off a lego creation. Both he and his brother love to find opportunities to swim.

In this Sunday’s Gospel, Jesus had his role of miracle worker thrust upon him by a persistent mother, and a set of circumstances that were not of his choosing. That is how it is for most of us living our vocations in family contexts. The challenges which demand us to multiply our love, patience, hospitality, and generosity beyond what we ever thought possible are mostly unasked for and unexpected. And they always require the invisible and transforming grace of God.

In the vessel that is family life, Jesus performs his miraculous alchemy over and over again. Every day, people who are as ordinary as water, people like my brother Danny, are transformed by the invitations to respond to the challenges of their marriage, and the challenges of parenting.

Is there a challenge in your marriage or family that has been thrust upon you that requires you to receive a daily infusion of the wine of God’s grace to see your way through? Is there a way in which you could reframe this challenge as an opportunity to be transformed into the person of substance you were always intended to be?