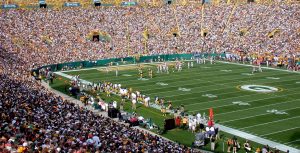 The yearly Super Bowl party at Lynn’s house exists like the warm lights of a hunting lodge glowing on the horizon of a bleak winter’s landscape.  Each year, Lynn’s party provides an excuse to take out a shovel, and carve a space for one more winter’s holiday…a chance to step in from the cold to visit with dear friends, feast on New Year’s-resolution-busting snacks, and laugh with one another over adult beverages and irreverent television ads.

And that’s what usually unfolds at Lynn’s house each year at this time, except the year that it didn’t.  In many ways, the Superbowl of 2011 unfolded in all of the usual ways.  Just like every year, we gathered.  Just like every year, our glycemic indices were boosted by trays of every imaginable configuration of fat and carbohydrates.  But on this year, something was unmistakably different.  On this year, the Super Bowl felt much more like a business meeting than a holiday party.  That’s because, on this year, after fourteen long years, the Green Bay Packers had come in from the cold!  That’s right, “The Pack” had made it “back” to the Super Bowl.  And for my cheese eating, snow shoveling, Lambeau-loving, Wisconsin born-and-bred wife, (and her three children) the NFL’s championship game had little to do with socializing, and everything to do with concentrating.  On that year, the clever television ads were a mere distraction.  Superbowl 2011 was the year of, “Shh!  I can’t hear the game!” and, “Could you please move, I can’t see the television!”

And praise be to God (who, I am told, dons his Green and Gold whenever the Pack are playing)!  In 2011 the good guys won.  As the clock ticked down to “zero,” with a foam wedge of yellow cheese on her head, braces on her teeth, and fourteen-year-old Green Bay hormones coursing through her veins, my daughter dissolved into a full fifteen minutes of joy-tears as she hugged anything and everything that wasn’t moving.  This was the same girl, who several years ago, wrote the former quarterback, Brett Favre, two separate letters on two separate occasions, begging him to stay on, when it looked like he might retire from her team.  On those two occasions, she received letters back “signed” by her football hero, the legendary, Brett Favre.  Both letters were lovingly enshrined next to her two Favre statues, and two framed Favre action pictures.

Just about two years before the Brett Favre replacement, Aaron Rogers, led the Green and Gold to a playoff victory, it was officially announced that her football hero, Brett, would be playing for the hated Minnesota Vikings.  Around that time, Annalise casually asked me if she could borrow some money.  She explained that she needed to buy some postage to return some merchandise.  When I asked, “What merchandise?” she took me upstairs and pointed to a box that she was ready to send.  With her permission, I opened one of the flaps.  There I found two statues, two framed pictures, and two letters signed, “Sincerely, Brett Favre.”  Her shrine had been dismantled.  She had constructed a new letter to send to her old football hero.  It read, “Dear Mr. Favre, I will not be needing these anymore.  I am no longer your fan.  Sincerely, Annalise Wagner.”

This Sunday’s Gospel passage, provided a great opportunity to reflect upon the experience of anger (“But I say to you, whoever is angry with brother or sister will be liable to judgment… (Mt 5: 22a).”  As a clinician formed and informed by Christian spirituality, I have observed that the emotion of anger appears to be a kind of spiritual hot potato for many sincere Christians who truly want to live a Christ-centered life.

It seems to me, that any reflection on anger should begin with the insight that, like all the other emotions, anger is morally neutral.  The old bromide that “feelings are neither good, nor bad,” was just as true in Jesus’ day as it is now.  The appropriate response to an emotion is to notice it, and to ask oneself, “What is this feeling revealing to me, and what will I do with it?”  In his famous novella, A Christmas Carol, Charles Dickens observed that some feelings can have a purely biological source.  We can feel easily moved to anger when we have eaten or drunk the wrong things, or failed to get enough sleep, or pushed ourselves too hard without a break.  At other times, a deep and persistent emotion like anger can be a finger pointing to important longings of the heart.  According to Saint Ignatius Loyola, we should pay attention to such inner movements.  They have the potential to reveal a divine calling to take action.

I have come to the conviction that the capacity for anger was woven into our soul to provide us a way to notice injustice done to ourselves, or others.  I have frequently noticed that in the healing process that follows a cruel childhood, or the break-up of a bad relationship, men or women will heal far more quickly when they allow themselves to feel their anger.  When this happens, I will frequently hear a Christian client nervously paraphrasing this Sunday’s scripture,  “Didn’t Jesus say that if I get angry, I’ll be “liable to judgment?”  The answer is that anger is a good stepping-stone in the healing process, but it makes a lousy destination.

My daughter’s anger helped her move on from her allegiance to a former football idol.  If she had stayed stuck in that anger, by rehearsing it day-after-day, she may have become like one of the poor unfortunates who populate the sports talk shows for whom an athlete’s choices on, or off the field are the occasion for another extended rant.

Healthy anger activates healthy action.  By boxing up an old shrine, Annalise found a container for her disappointment.  Is there a persistent sadness, or an unattended grief in your life?  Allowing oneself to experience the latent anger contained in the sadness or grief can be one powerful way to bring about an unexpected healing.