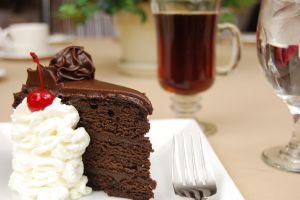 My eldest daughter, Annalise, is a Leap Baby (born on February 29).  Whenever one of her “real” birthdays occurs, once every four years, my tendency has been to pull out all of the stops.  I remember what “pulling out all the stops” meant on her second “official” birthday.  It meant spending a whole day in the kitchen preparing an incredibly labor-intensive cake.

I am told that the Yiddish word, “putchki,” refers to a dish that requires lots of fiddling and fuss (translation:  something that’s a pain in the patootee).  When we celebrated my daughter’s second birthday, I made a chocolate birthday cake for her that was incredibly delicious, but very…putchki.  The recipe called for over a pound and a half of melted chocolate, a quarter cup of unsweetened, powdered chocolate, almond liquor, five separate phases, and a day’s worth of fiddling in the kitchen.  The level of putchki required to sustain this exotic culinary life-form immediately placed it on our family’s endangered food species list.  I immediately “misplaced” the recipe to my daughter’s favorite dessert of all time in a cupboard in the back, in the corner, in the dark.  As far as my family was concerned, this dessert had gone extinct.

And so, “why”, you may be wondering, did I spend another Sunday several years later,  putchkiing in the kitchen on the exact same cake whose existence was thought to have been stamped out by gastronomical natural selection?

The answer can be found in this Sunday’s “Christ the King” Gospel (Luke 23: 35-43).  In Luke’s version of this passage, Jesus was crucified between two criminals.  One of these lawbreakers utilized the opportunity to spew a little more venom on the world before he met his maker.  The other, “The good thief,” (i.e. Saint Dismas) rebuked the first misanthrope, uttering the famous phrase, “Jesus remember me when you come into your kingdom.”  Like an insect caught in amber, an instant in their lives was captured in Luke’s Gospel.  Now these two men will forever be remembered on the basis of one brief episode in their lives.

It strikes me that all of our lives are like that.  Human beings are meaning-making creatures.  Every moment of every single day, we are unconsciously weaving narratives around the people and events of our lives.  Every-so-often, a signature event takes place that unconsciously puts a period at the end of our story about someone else.  In other words, one episode in someone’s life often serves as a lens through which someone views another person’s entire existence.  And here’s the scary part, we don’t get to pick the episode utilized to sum ourselves up.

Which brings me back to the origins of my second putchki-cake-baking-marathon.  The seed for that cake was planted exactly six days earlier.  On the way to school the previous Monday, a series of unfortunate events conjured up my inner Count Olaf.  I became the tantruming version of King Triton from Disney’s, “Little Mermaid.”  By the time I had finished my roadside tirade, Annalise was thoroughly upset, and almost late for school.  On the way out of the parking lot, I remembered that the upset child, who just left my car, would now be sitting for a Spanish exam for which she had been studying for the better part of a week.

With that realization, a good healthy sense of sorrow surfaced.  I remembered my place in my Leap Baby’s life.  As her father, my job is to be a template for her.  Should she elect to pursue a vocation as a married woman, she will unconsciously be bouncing this and that suitor off of her image of the first man in her life…me.  I do not want my daughter accepting volatile, and unpredictable anger in men.  I want her to have internal instincts that insist upon nothing less than a man who can promise to love, respect, and cherish her because he is emotionally and spiritually mature and in charge of himself.  Furthermore, I do not want to be like the bad thief in this Sunday’s Gospel forever viewed through the microcosm of an instance of bad behavior.  I don’t want any episode like the one last Monday to be the prism through which she views her father.  I knew that I had some work to do.

After a day of self-reflection that included conversations with a couple of respected friends (including my spouse), I came up with a plan.  After school, in between appointments, I picked Annalise up and took her out for a cup of hot chocolate and ice cream.  I apologized for my behavior, giving her my best explanation for what happened.  Although, as a counselor, I have helped many others raise their adolescents, I have never had one of my own.  She accepted my apology.

Then I accepted an apology for her misdeeds of that morning, but refused to accept the false claim that her misbehavior was responsible for my emotions.  “I am responsible for my emotions,” I explained.  We agreed to an every-other-week hot chocolate date together.  And then we selected the amends that I would perform to symbolize my sorrow, and restore the trust between us. Annalise remembered the chocolate putchki cake from years ago.

A day in the kitchen was a small price to pay to frame up an episode that my daughter will use to remember me.  Reconciliation never tasted so sweet.