“Why would anyone go into business to lose money?”  I wondered. At seven years old, I assumed that everyone was like me and would naturally take full advantage of the naïve new owners of the Heritage House Smorgasbord that had recently opened its doors.  The sign that read, “All You Can Eat,” seemed like a challenge, or a dare.

Here was more food than I had ever seen in my life.  Looking down that buffet table was like catching just the perfect angle on two cattycorner mirrors.  It seemed that an infinity of food was telescoping out into eternity.  If I knew how, I would have begun to stretch like an athlete entering the field of play.  I was Joey Chestnut (the 2013 food eating champion of the world) before Joey Chestnut was Joey Chestnut. 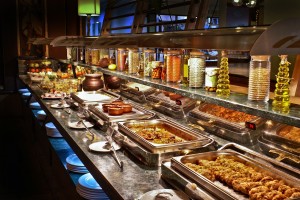 In our everyday life of my childhood, the volume of chocolate pudding consumed was limited by the capricious dictates of the food engineers at Jell-O Inc.  One box of powder and the requisite quantity of milk would get each of my seven siblings and me one serving of approximately five spoonfuls of creamy chocolate delight.

But here at this food paradise, a veritable pond of chocolate pudding presented itself to my incredulous eyes, and trembling hands.  If allowed, any reasonable child would have hoisted him or herself into that feeding trough for a thorough chocolate pudding shampoo and bath.

Bowl after bowl of creamy pudding greased the way for plate after plate of dressing—a rare taste known only at Thanksgiving in my house.  Gone was the need to slowly excavate a piece of pumpkin pie one thin layer at-a-time to make it last.  Here at the Heritage House Smorgasbord, one could carelessly take huge mouthfuls of pie, knowing full well that another piece would magically appear to replace the one that was just now splashing down into the previously consumed gallons of all-you-can-eat bliss.

Over the years, this pattern of gluttony would repeat itself anytime I visited a buffet style restaurant.  In the name of “getting my money’s worth,” I would always leave these establishments feeling full to the point of feeling ill.  Only in the last few years, have I come to the realization that if I don’t feel sick at the end of one of these buffets, I haven’t lost a contest.  Perhaps just the opposite might be true.

Several years ago, three friends felt inspired to introduce me to a buffet table of self-help authors and books on CD.  None of these three friends had ever met one another.  Coincidentally, each of their books was a variation on the same theme.

These secular authors, in their own peculiar vocabulary, seemed to be inviting me to take the words of Jesus in this Sunday’s Gospel more seriously.  In their own way, each of them called the listener to petition God with more intentionality and confidence.  They seemed to echo Jesus’ words that our God is loving and generous and wants to respond to our prayer.

In the past, I have approached self-help gurus with a highly critical ear.  “If they say one single thing that strikes me as contrary to what I have studied, I will set the whole thing aside as untrue!”  This has been my unspoken message.  As you may have guessed, I have not asked or received much from the authors of self-help books.  If Amazon™ operated according to this unreasonable standard of perfection, only two authors would occupy the lonely “Self Help” section of their menu:  Augustine, and Thomas Aquinas.

When it comes to self-help books, I have behaved like someone walking up to a buffet table and saying, “Look here.  I see a side dish of coleslaw.  I hate coleslaw.  We must leave immediately!”

The Catholic Church’s Vatican II document, Gaudium et Spes, has challenged Christians to fearlessly step up to the buffet table.  According to this document, Christians are to look for glimmers of God’s truth in the world.  The presumption is that, aside from the direct revelation of scripture or tradition, all systems of thought will be incomplete. But even in their limitations, they could be reflecting something of the light of truth.  Therefore, one is well served by approaching the texts of social science, philosophy, physical science, or self-help literature with an open mind to what is useful and true.  What is flimsy, false, or useless can be left aside like coleslaw.

Since that summer a few years ago, I have been trying on a new notion relative to the previously forsaken genre of self-help literature.   Unlike a seven year old at Heritage House Smorgasbord, to get my money’s worth, I do not have to eat the whole thing, nor do I have to reject the whole thing.  As the old AA saying goes, “I can take what [is nutritious] and leave the rest.”