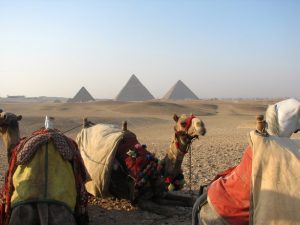 It was time to upgrade.  For thirteen years we had been a strictly “network” TV family.  Our viewing pleasures were limited to channels “2,” “4,” “5,” “9,” “11,” and “30.”  Until that time, I had always feared taking the plunge into the channel-enriched worlds of cable or satellite television.   Whenever the topic would arise, I anxiously imagined my children staring open-mouthed at consecutively viewed cable shows that caused their intelligence quotients to drop along with their grades, family relationships, and morals.

Then came the Winter Olympics.   My sports obsessed family argued that we could purchase a subscription for satellite television that would circumvent the maudlin, violin-drenched human-interest stories provided by network Olympic coverage.  By signing up, my family could watch the Olympics the way I used to watch it as a kid—just the events as they were happening with a minimum of commentary.

There is an old Arabian saying about the wisdom of not allowing a camel to get even a little bit of its nose under your tent.  If you do, the old saying goes, it won’t be long before the whole head will appear, then the neck, followed by the shoulders, chest, belly, and finally the haunches.  The implication of this metaphor is that once a camel insinuates itself into your tent, it can make for a pretty tenacious houseguest.

As the Olympic torch was quenched, the flames of March Madness began to ignite in my heart.  “Just one more month of satellite TV will help my kids develop a better understanding of a sport they’re learning.”  I reasoned.  Logic like that resulted in satellite-enhanced television extending past Easter, past Mayday.  It wasn’t long before my satellite dish and I found ourselves smack in the middle of Summer vacation together.  On any given night, you would have found three children, two adults, and one full-sized camel in the basement watching recorded episodes of “American Idol,” “Iron Chef,” and “Hannah Montana.”

Generally, I found that my fears of TV-hypnotized children did not come to pass.  Instead, what I discovered was that I was the only kid in my house staring open-mouthed transfixed at fifty-seven channels of mind-numbing entertainment.  For example, one night I found myself binging on an old playoff basketball game between Larry Bird’s 1987 Celtics and Isaiah Thomas’ 1987 Pistons.  At around 12:30 a.m., as I dragged myself to bed, it occurred to me that there may be better ways to spend my time than watching a basketball game that I had already viewed twenty-two years ago.

The Christian tradition has developed a thick playbook devoted to Lenten skills:  good works, fasting, prayer, increased tithing.  The Easter playbook, by contrast, is a little skinny.  It seems to me that there is a kind of art in welcoming more Easter joy and peace into one’s life. This Sunday’s Gospel (John 10: 1-10) highlighted a fundamental Easter skill upon which all of the others depend.  In John’s Gospel, Jesus described himself as a loving shepherd.

In the Jewish tradition, it is referred to as the “Shekhinah.”  In the Quran, it is spoken of as the “Sukainah.”  The Upanishads of Hinduism speak of “Brahman,” and “Atman.”  Buddhists refer to the “Buddha Nature.”  As Christians, we hold the conviction that the presence of the Good Shepherd dwells in our hearts.  Underneath the cacophony of thoughts, feelings, and superficial desires, we have a gentle and loving guide who waits to lead us to more peace, more joy, more love, more self-discipline, and more fulfillment of our deepest desires than we can ask for or imagine.

The fundamental Easter skill upon which all other skills depend has to do with our willingness to let ourselves be led by the Good Shepherd.  In any given moment, we can take a decision and bring it down into the core of ourselves.  Standing alongside the Lord who resides at the deepest part of our heart, we can evaluate impending decisions  according to Gospel standards.  “Does this action (or inaction) bring more compassion, more energy, more peace, and more joy into the world over time, or does it detract?”  Having discerned the pathway, we have at our disposal, an unlimited reservoir of resources to do what we could never accomplish on our own without divine life.

Is there an area in your life that limits the amount of joy, peace, and deep love that you could be experiencing? What is the equivalent of the satellite TV in your life that the Good Shepherd could gently and firmly lead you to set aside?  At the core of ourselves is an undying power even strong enough to pry a Homer Simpson like me off of the couch.