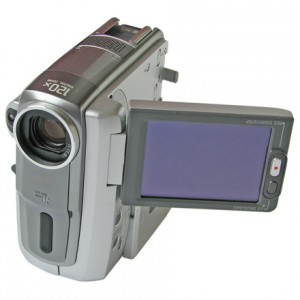 When I placed our movie camera in the “auto record,” position, I had no idea that I was chronicling the miscarriage of a daughter we would never know.  As I set up the tripod astride the expectant Christmas tree, I had intended to record a charming tree-decorating party complete with hot chocolate, Frank Sinatra, and a twenty-two month old elf.  The tape began with the redundant pattern of a wobbly toddler currying a series of be-hooked bingles, boggles, and beads to the outstretched coniferous arms of our Scotch pine.

About twenty minutes into the video, my pregnant wife exited the room, leaving Annalise and me to the pleasant monotony of pine tree beautification.  Several minutes later, Lisa stepped back into the frame just as Frank Sinatra’s merry voice had begun to paint a classic Christmas picture in three quarter time.  Into this warm scene, broke the bracing cold news that all was not well with Lisa and the child that was supposed to be developing within her womb.  The contrasting image of something unnamed that had gone terribly wrong, set against the backdrop of Christmas cheer, produced a video reminiscent of a Stanley Kubrick classic.

The abrupt conclusion of that old film resulted from my sudden awareness that a not-so-hidden camera was documenting an intimate moment of pain in our lives.  But even with the camera off, the human memory has a way of chronicling pivotal life’s moments.  During significant life’s events, the movie camera of our meaning-seeking minds never stops recording.

Whenever the topic of that sad event surfaces, Lisa and I unconsciously go back into the video library of our memories and pull up that old footage.  Thanks to the many small gestures of turning toward each other rather than away, this key event in our lives is now memorialized as a time of closeness rather than a time of pain and sadness.  Taking the day off of work, beginning that ominous day with Mass, being present to one another in the OB/Gyn’s office, sharing a previously banned, post-gestational beer—all of these little moments combined to become part of the frame that Lisa uses to memorialize that event.

It seems to me that life is punctuated by key moments like the one I just described. These moments exist like small memorials within the trophy case of our imagination. In a marriage, or other close relationship, those memorials function like points in a connect-the-dots pattern.  In relationships characterized by fidelity, intimacy, and satisfaction, the pattern is dotted with key moments in which a spouse showed up with gestures of generosity and thoughtfulness.

By way of contrast, the outlines of unhappy relationships plot a course through nodal moments that memorialize omissions.  For example, I know a dad who refused to attend his own son’s wedding due to an old unresolved conflict.  Even after all of these years, and a successful father-son détente, what should have been an unqualified happy event is forever tinged by the sadness of a father’s absence.

This Sunday’s third reading (John 13: 31-35) was carved out of the section of John’s Gospel entitled “The Farewell Discourses.”  In this short passage, Jesus demonstrated a keen understanding of how human beings tend to naturally memorialize key events.  Just before his passion and death, Jesus articulated the heart of what he wanted his disciples to remember.  He positioned powerful words about loving one another within the context of the institution of the Eucharist.  This intentional way of going to his death transformed it into a thing that would give life to all who memorialized it through the rest of human history.

This Sunday’s Gospel presented me a challenging question,  “How can I intentionally shape a suitable memorial for the nodal moments in my family’s life?”  How can I—through a gift, a letter, a family gathering, a piece of artwork, or some other symbol—create something that will occupy a treasured space within the trophy case of each of their imaginations?

It seems to me that one dimension of this Sunday’s command to “love one another” has to do with imitating the Master in sacramentalizing the nodal events of life with our transforming gestures of intentional, intelligent, memorializing love.