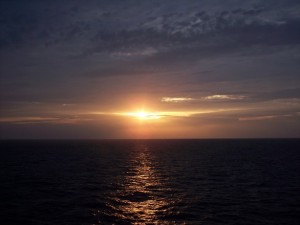 During a spring break four years ago, my wife and I resurrected an old, pre-children vacation ritual. At 5:00 am, we loaded three sleep-walkers with their gear into the minivan. In the dark, we drove one and a half hours from our Orlando condominium to the Atlantic Ocean. We arrived just as soft, pastel colors began to glow on the maritime horizon. The combination of cool, dew-soaked sand, and steady ocean breezes exercised a kind of Starbucks effect on my family.

Slowly, slowly, the blue canvas of sky shifted from midnight, to royal, to cobalt, to aqua-blue. I could practically hear the first few notes of Aaron Copeland’s, “Fanfare for the Common Man,” as shafts of golden light sprung new born from their cloudy container.

A single spontaneous voice started it: “10”… “9”… “8”…. Several other voices joined in, building to a dramatic crescendo: …. “5!”… “4!!”… “3!!!” “2!!!!”… “1!!!!!!!” (Wait for it! Wait for it!)…. A brief pause….and…. A false start! The timid sun remained temporarily hidden behind a new bank of camouflaging clouds. The countdown began again, ending with the same results: a false start, a pause, and the process repeated itself. The ritual cycled like this over and over again, for a full ten minutes. With each new chorus, laughter born of sleep deprivation doubled us over. When the timid sun finally broke over the horizon, my oldest daughter, without missing a beat, pressed the “Play” button on her phone. Immediately, the opening African chant from “The Lion King” took hold of our spirits, lifting them skyward. An irrepressible urge caused me to hoist my Second Grader skyward, as if she were baby Simba, and I was Rafiki displaying her from the solid pedestal of “Pride Rock.” She, in turn, lifted her hands as if she were a priest sending a congregation’s prayers heavenward. It seems to me that on that sun-soaked morning, that’s exactly what she was. So were the rest of us.

“40,” “39,” “38” ……… “5!” “4!!” “3!!!” “2!!!!” “1!!!!!” Once again, we’ve come to the conclusion of a forty-day countdown through Lent and Holy Week. Here, at the beginning of the Easter Season, we acknowledge and celebrate the most pivotal of Christian insights. Ever since Jesus was raised from the dead, divinity has come to dwell within the human heart. The curve of the human shoulder is the same, the sun still meets the seashore every morning, but suddenly, the Kingdom of God is at hand. Now, even something as everyday and ordinary as a sunrise, has the capacity to reveal some dimension of divinity.

One important implication of this insight was discovered by my family and me on a patch of breezy ocean beach, smack dab in the middle of Lent. Namely, Easter cannot be contained on a single calendar Sunday. Easter, we discovered, cannot even be confined to the fifty days of the Easter Season. With the indwelling presence of God pulsating at our core, Easter grace and joy can flash like a ray of sun at the most unlikely of times and in the most unlikely places.

One cannot script such events as a surge of joy pulsing through an entire family. God is the giver of grace. But prompted by a crazy idea (The Spirit?) Lisa and I decided to pack pillows, blankets, and a cooler of food. We set the alarm clock, and woke up at 4:30 am. In other words, God provided the grace, but through our decision-making and behavior, we provided the container to hold that grace on a sun, and laughter drenched, morning. With our cooperation, or God’s cooperation, depending on how you look at it, Easter crept out of its banks and flooded a Lenten morning.

During this Easter Season, pay attention. Listen with your inner-ear, watch with an attentive eye. See if the Spirit is attracting you toward an action plan that could result in a good solid container for an outpouring of Easter joy. It could be something as simple as pulling your car over to collect a handful of wildflowers for your beloved spouse, child, or friend. It could be as complicated as revisiting an old discarded leisure time activity, or building a new life-giving habit.

The message first discovered by Mary Magdalene in today’s Gospel (John 20: 1-9), first believed by the Beloved Disciple (John 20: 1-9), first announced by Saint Peter in today’s first reading (Acts 10: 37-43): the Kingdom of God is at hand. It is as near to you as the breath that you draw…as near as a crazy idea that flashed through your mind. This Easter Season, would you be willing to pay attention to those serendipitous ideas? Would you be willing to apply your intelligence, and your intention to put one or two those crazy ideas into action? In doing so, you may find that you have created a container to capture a further sharing of Easter joy.