“When life presents you with an “either…or” dilemma, try your best to choose “both.” 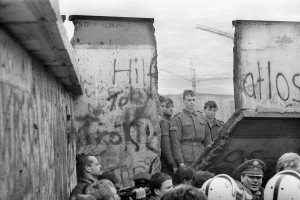 Decades ago, at the dawning of the Information Age, futurists were predicting that advances in media technology would remove the boundaries that separated peoples one from another.  They conjectured that, with abundant information would come abundant communication.  Finally, the age old Towers of Babel that pitted nation against nation, and tribe against tribe, would crumble and fall.  The world would come to resemble a “global village” (Marshall McLuhan, 1962).

Fifty years later, the foretold Information Age is here.  You and I are living in the adolescence of that age.  Intellectuals of our time have noted that something very different than the predictions of a half-century ago have come to pass.  Rather than making our world more cohesive, media technology has allowed people to sort themselves into intellectually gated communities.  Now people are able to consort exclusively with those who think like they think, believe as they believe, and behave as they behave.  Rather than tearing down barriers, media technology has become a tool to wall us off, one from another.

As a counselor and consultant, I spend hours a day attempting to help people sort through mis-communication, and tear down the walls constructed by mistreatment, ignorance and confusion.  Like many others, my work is done from a sedentary position.  One of my favorite ways to clear out the cobwebs on a cold winter’s evening, is to layer on warm clothes, don my reflective gear, switch on battery powered lights, and bicycle home from work.

Last Monday night, I prepared to leave my office in Clayton, Missouri, and commute home as I do on other nights.  But on this night, County Prosecutor, Robert McCulloch, was due to announce the Grand Jury’s decision in the Darren Wilson/Michael Brown case just two blocks away from my office.  At 6:30pm, I left my building, and hopped on my bicycle to commute home.  I could immediately tell that something was different.  Like an old Western before a high noon duel, the streets were deserted.  There was a palpable sense of tension in the air.  Businesses were closed, and residents stayed inside anticipating the potential negative consequences of the verdict.  The only cars sharing the road with me were police vehicles sent to both protect and regard me with suspicion.  Just eight miles away, things were about to unfold that would unite the mothers of protesters, police officers, and Ferguson residents in a sleepless night of anxiety.

The next day, during a break in my schedule, my daughter, texted me a video in which she and some college friends walked in a large crowd chanting, “Black lives matter!”  She was on a march in Downtown Saint Louis. Proudly, I stepped out of my office to show my little film to a colleague.  She frowned and said, “Does she think Officer Wilson was guilty?”

Immediately, I could sense the emotional contours of a wall that sorts and divides people.  Perhaps this wall was constructed of one computer click, and then another, and another…in which one impassioned opinion is “liked” more than another.  As the clicks accumulate, opinions harden into positions.  Those positions eventually form a sorting wall.  Fully ensconced on one side of the wall, these positions are confirmed by the echoes of all the others who have also arrived through their clicking and clicking, and discussing with like-minded people.

I stood for a silent moment before the colleague whom I have always respected for her even-handed approach with both clients and colleagues.  “How’s this one going to go?”   I thought to myself.  Then I remembered the family motto my daughter and I share together.  “When life presents you with an ‘either…or’ dilemma, try your best to choose, ‘both…and.”

I explained to my colleague that I think it’s possible to believe that Officer Wilson acted out of self-defense, while also believing our African American brothers and sisters when they say that they are regularly treated with disrespect by police, realtors, medical professionals (including counselors), and sales people.  I briefly shared the story related to me about a black executive who has been stopped many times for doing nothing more than driving home into his mostly white neighborhood.  I recounted the narrative of an African American graduate student who described what happens when he forgets and wears his hooded sweatshirt around campus at night.  Unless he is walking with his white friends, he gets stopped.  I thought about the mountains of statistical information regarding African American health outcomes, life expectancy, education, unemployment, and income.  I explained that my daughter’s chant, “Black lives matter,” doesn’t mean that white lives don’t matter. She took the time to step out from behind the wall and listen to the stories of people who are tired of being treated with disrespect.  I explained that I was so proud of Annalise because she took time to hear, and having heard, she marched to the cadence of her convictions.

At the end of our conversation, my colleague thoughtfully said, “I believe every bit of what you just said.  Good for her.”  I thought to myself, “Good for my colleague!”

Statues, like walls, are made of stone.  They hold a single position for all time.  To be fully human, and fully alive is to be able to move.  During the season of Advent, one of the ways to “prepare the way” for a spiritual awakening is to move out of your intellectually gated community, and really listen fully and deeply to those who are different from you.