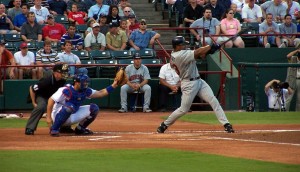 In other boys’ lives, the smell of a freshly oiled baseball glove was the perfume of summer. Other boys reacted to that fragrance the way that bees react to newly opened apple blossoms in April. Intoxicated by the aroma of leather and wood mixed with dust, boys would swarm in groups of nine to any open space with weeds shorter than six inches. For boys like me, the smell of a baseball glove was the scent of futility and failure.

When I wasn’t on the bench, my position was right field. Every baseball-challenged boy like me under the age of ten knows the meaning of right field. Right field is a place to pick clover and to watch the shape shifting grandeur of a bank of clouds. I knew the unspoken oath of right field: “First, do no harm.” By placing me out in my own personal field of dreams, my team knew that they had minimized the harm that I could do to our chances of winning.

At Little Flower Grade School, in Springfield, Illinois, our one and only baseball diamond was situated on the edge of a gargantuan asphalt parking lot. If a ball were hit hard enough to leave the field of play, it would roll onto the asphalt into some other grade level’s game of kickball or hopscotch. If someone from that other game inadvertently picked the ball up before the outfielder could get to it, a homerun was automatically transformed into a ground rule double.

For me, that meant that when a power hitter was up to bat, I would always play as shallow as possible. In this way, any well-hit ball was sure to sail over my head, and roll onto the asphalt contiguous with the field. Next, my job was to track that ball as it disrupted someone else’s game. I would then beg someone from that game to pick the ball up. Typically, they would comply, and presto, a homerun was transformed into a ground rule double. My strategy never made me a hero, but it regularly saved me from being the goat that dropped a fly ball, or threw to the wrong base.

Alas, no such strategy could shield me or my team from an embarrassing lack of eye-hand coordination at the plate. Despite the expert analysis of Mr. Bergner, my Fourth Grade teacher/coach, the results were always the same: a perfect batting average of .000.

This Sunday’s Gospel (Luke 24: 46-53) was excerpted from Luke’s final resurrection narrative. After sharing a meal, and a final lesson from the risen Lord, Jesus ascended home to his Father. Just before the passage ended, he made a Pentecost pledge. “And behold, I am sending the promise of my Father upon you; but stay in the city until you are clothed with power from on high” (vs. 49).

I think many of us can identify with those disciples during that period of time when they were back in the city waiting. For most of us, the will of God is not mediated by an apparition with a set of clear instructions for our lives. A major portion of our Christian job-description involves the art of discernment, which in turn, often involves waiting for a clear direction to become evident.

When God fashioned me in the silence of my mother’s womb, he clearly did not sculpt me to fit a baseball player’s uniform. My dad (who was a baseball hero in his childhood hometown of Athens, Illinois) displayed the wisdom of the disciples in this week’s Gospel to wait for the right set of clothes for his son.

Right smack in the middle of Fourth Grade baseball season, my dad noticed how I had placed an old barrel I had found in our shed against the brick wall of our house. He observed how I would repeatedly ricochet a kickball into that barrel from various angles. Soon a telephone pole was sunk in concrete next to our driveway. Next a basketball goal was affixed to that pole ten feet high. On most summer’s days (or spring or fall) I could be found hoisting a buzzer-beating, NBA championship winning shot up at that hoop. When fifth grade rolled around, I discovered a set of clothes that fit me. I eventually became the point guard for the Little Flower Lion’s 5th and 6th Grade basketball team.

The dual skill sets of patient waiting and prayerful observation are necessary for Christian parenthood. My father had the good sense to not force me into an old set of clothes that fit him, but didn’t suit me. By patiently giving me the gift of this space, a previously unnoticed talent was able to emerge. He was then able to notice and encourage it.

Is there a set of ill-fitting clothes into which you have been trying to force yourself or someone else? If you suspect that there might be another set of clothes that God has in mind for you, or someone you love, would you consider carving out some time for prayerful reflection and a conversation with a mentor about this?