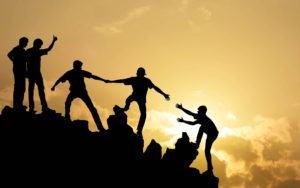 It’s just a matter of time until The Human Genome Project discovers the telltale strand of DNA responsible for debilitating fear.  I know such a gene exists because I am a carrier.  Here and there, I attempt to inoculate my kids from the harmful effects of this Wagner trait.  In the spirit of providing a booster shot, I asked my friend, Darrell, an outdoor educator, if he would bring along ropes, harnesses, and rappelling equipment for a weekend camping trip.  With a proven guide and tested safety equipment, I was able to observe my kids conquer, first their fears, and then a forty-foot rock wall.  From my vantage point I could suggest various pathways of ascent to John Harry (who was seven-years-old at the time), and Annalise (who was ten).  At only two years of age, Lizzie sat on the sidelines with me as I joined my voice with Darrell’s to encourage them past their doubts and fears one hand and foot hold at-a-time.

After exhausting the adventures the climbing wall had to offer, Darrell led us on a hike to our next set of challenges.  We arrived at a place called, “The Squeeze.”  Here was a natural wonder in which an ancient tremor had cut a foot-wide fissure into a building-sized rock.    About three quarters of the way into this thirty foot long sliver, the crack took a ninety degree turn that simultaneously asked the explorer to elevate him or herself upward while twisting and turning with not even a millimeter of space to spare.

Darrell assured me that he had taken hundreds of children safely through this passage.  With my hesitant, “Okay,” the kids disappeared behind Darrell like slippery salamanders into the bowels of that dark, wet rock. On the other side, they popped out wet and dirty with the smiles of conquering conquistadors/conquistadoras. The first words out of their mouths were, “Dad, you have to try this!”  I explained that the combination of my fear, and relatively larger girth would make this quite impossible.  They wasted no time in explaining that they had faced theirfears on the cliff now it was myturn.  Words that I had spoken to them over the years when they were trying new things came cascading out of their mouths like a mountain waterfall pounding on my head.

While they were speaking, I could see that I stood at the crossroads of two pathways.  As I looked down my preferredpath of safety and comfort, I could see that diminished respect and dwindling parental credibility awaited me at the end.  The imploring eyes of my children caused me to take the other scarier pathway, but not before I made a proclamation:  “I reserve the right to turn around at any point I want!” They agreed.  I almost wet my pants.

The only way for an adult to navigate this crevice was to turn one’s feet heel to heel and to commit one’s head looking in either one direction, or the other.  The feeling of stone simultaneously pressing upon my back and belly led to an instantaneous reflex to back out.  “I don’t know if I can do this kids!”  They responded, “I know you can daddy.  Just take another step.”  I took another step.  “Are you sure I won’t get stuck?”  I implored. “If you do, you can turn around, but you’re not stuck now.”  My daughter responded.  I arrived at the dreaded ninety-degree bend that required willing my body to turn, elevate, and push myself through an even smaller space.  “I don’t think I can do this!” I croaked.  My son reasoned with me, “You can’t quit unless you try first!” That made sense.  A minute later, I had rounded the corner.  I could see sunlight.

Just as I was making my ascent out of the dark hole, my hips became wedged.   Like an obstetrician, Darrell took me by the arms, and began to pull. I had to surrender a good t-shirt and some skin in the birthing process, but moments later I was standing in the sunlight exchanging high fives with my kids.  “Thanks daddy!  I knew you could do it!”

The eight verses of this Sunday’s Gospel passage were taken from one of the most uplifting and challenging chapters in all of the New Testament (John 15: 1-8).  In it, the followers of Jesus were told that, henceforward, fear was no longer an excuse for inactivity.  God is a friend, not a slave owner.  We were told that beneath the booming, banging, buzzing cacophony of the fickle human heart, the Christian could expect to access an ever-available reservoir of joy.  Furthermore, if we could expect to produce great works of lasting value in our lives.

For a seven, ten, or forty-six year-older to summit a stone wall, or slither into the depths of the earth, a few tools were required, most especially, the tools of a supportive, challenging team moving you forward.  It seems to me that summitting the heights of Easter living also requires the intentional development of a community of support.

Recent studies on achievement have shown that the American ideal of the rugged individual is nothing more than a comic book fiction.  Whenever you see someone who seems to have single-handedly conquered some mountain of achievement, if you look closely, every time, you will find someone(s) who has (have) supported and assisted that man or woman in finding the necessary hand and footholds along the way.

If we hope to increase the Easter joy in our lives, it is essential, that like the early community described in Acts of the Apostles, we develop a community of support that will both nourish us, and like my kids, push us beyond where we could go all by ourselves.  Who is it in your life that stubbornly insists upon calling you to live out Easter Joy no matter the fears or costs?