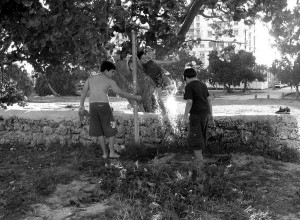 As I stepped out the back door with my cup of stout coffee, I could hear the call of a familiar sounding forest creature from deep within the honeysuckle/sumac thicket. The woodland nymph’s voice served as the homing device to guide my curious footsteps toward a hidden magical world. After several contortions, I lifted a branch to find my second grade son and his cousin hard at work in the woods behind our house.

They had discovered a spot where a forty-year-old silver maple had been plucked by a storm and laid on its side. With the aid of a hoe-shaped limb, they were busy digging a boy-sized shelter just below the exposed tentacles of the slumbering giant. Piles of gathered limbs, branches, and twigs told the story of these architects’ blueprints. Once the shelter had been sufficiently widened and deepened, building materials from the forest floor would articulate with the five-foot-high exposed root system to create a lean-to. This structure, I was told, would come in handy the following winter for anyone trekking through the neighborhood who might get caught in a snowstorm and require life-saving shelter from the cold. It would also serve as a garrison and arms storage facility for future snowball fights.

A generation ago, the fathers of these two backwoodsmen had engaged in exactly the same enterprise in a forest near our boyhood home. By then, reruns of the “Daniel Boone Show” inspired us to employ silent tracking techniques and coded bird-whistles to conceal our movements. These techniques must have worked. Despite many days mapping and taming that wilderness, we both managed to preserve our scalps from the ravenous natives whom we imagined to be longing for yet more trophies to place on the blood-stained walls of their primitive dwellings.

In this Sunday’s Gospel (Luke 9: 18-24), Jesus pitched a generic question to his disciples, “Who do the crowds say that I am?” The first three disciples whiffed at it: “John the Baptist, ” “Elijah,” “one of the resurrected ancient prophets.” The Lord then refined his question and put it out over the plate. “But who do you say that I am?” Peter swung at it and knocked it out of the park. “You are the Messiah of God.” The Lord then went on to describe what being the anointed one would mean for him as well as for all of those who would follow him.
Since the days of the noted researcher, Eric Erikson, developmental psychologists have been fascinated by the ongoing process of identity formation. In Eriksonian theory, a person comes to a sense of his or her own identity through the course of many life stages. Each new stage brings with it a unique challenge that seeks resolution before the next stage can be successfully navigated.

The developmental phase of, “Identity Formation,” has been described as the most complex and challenging of all the stages. The successful attainment of a clear sense of identity is the primary psychological occupation of young adulthood. Questions, like the one Jesus posed in this Sunday’s Gospel, (e.g. “Who am I?” “Who do people say that I am?”) occupy center stage during this period of a person’s life. Identity issues can frequently reemerge in later phases of life when significant losses or transitions come calling.

As I read this Sunday’s scripture, I imagined that Luke captured a moment in time in which Jesus had recently come to a deep understanding and acceptance of his own identity. I have often wished that the Gospel writers would have recorded more detail about how the one “who was like us in all things but sin,” came to an awareness of his own identity and mission. My suspicion is that the many accounts of Jesus taking his down-time peppered throughout the Gospels had something to do with an emerging sense of his identity and mission.

Each summer, around this time, a nagging anxiety used to always plague me. As this or that parent described the summer enrichment camps and programs their children were attending, I would start questioning our decisions. “Have our choices to preserve vast stretches of summer for laziness and haziness shutting windows of opportunity for our children?”

As I emerged from my second grade son’s woodland world constructed of limbs and logs and boyhood imagination, I took with me a deep sense of fatherly satisfaction. The process of identity formation is built, in great measure, with the aid of plenty of downtime outside the watchful, directive eye of a coach or a parent. Structured activities have their place. It just seems to me, that at this stage in American history, structured activities have spilled out of their boundaries and have flooded our children’s lives.

This week, could you look down into your summer to see if you could imitate the Master by carving out plenty of downtime for your children and for yourself?