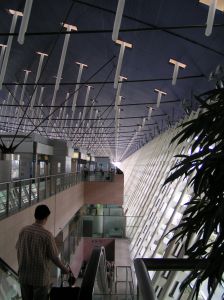 A sudden turn jolted me out of a sound slumber just in time to see the head-on collision the instant before my life was to end.  The impending accident left no time for even something so frivolous as a scream, or for my brief life of twenty-five years to flash before my eyes.  In an instant, bone crushing, protoplasm-splashing steel would invade the cabin of our small rental car separating sinew from soul.  The gallon of air that had just rushed through my mouth and into my lungs would be my last, or so I thought.  Miraculously, without even so much as a swerve, the driver of the oncoming truck effortlessly sped off to our right, followed by several other vehicles.  With the fog of car-sleeping momentarily lifted, I remembered that we were in Ireland, where people regularly traveled on the “wrong” side of the road.  Relieved, I drifted back into a jet-lagged stupor only to repeat the same scene over again whenever the driver of our rental car hit an unexpected bump, or made a sudden turn and I awoke to discover that we were in the “wrong” lane again.

My first trans-Atlantic flight had deposited me at Shannon’s International Airport a couple hundred miles south of my intended destination near Belfast.  In those days, “The Troubles” were still an unfortunate way of life for the urban Irish of the north.  The conflict in Northern Ireland caused idealistic college students like me to donate a piece of their summers to supervise Protestant and Catholic kids in a play scheme.  We hoped that, by getting children to play together, we could chip away at the five hundred year old wall that separated these two branches of the Christian family tree.  We hoped to create a new generation of Irish capable of imagining a new history free of the never-ending cycle of violence and reprisals.

My short tenure in Ireland revealed that traveling on the “wrong” side of the road wasn’t the only thing different about this ancient land.  Of course, there were the standard, superficial things about which we Americans usually complain.  Milk was rare; ice water, non-existent.  Fish and chips replaced burgers and fries.  Beer was thick, black, and served at room temperature.

But there were also substantive differences between our American ways, and the ways of the Northern Irish.  History, for these people, refused to stay in the past.  Events that occurred hundreds of years ago were treated as though they occurred last week.  While on that trip, I learned that the culture in which one is raised profoundly impacts how one sees and interprets the world

In this Sunday’s Gospel selection (Matthew 15: 21-28), we heard Matthew’s account of Jesus’ encounter with a woman, who from the Jewish cultural view of the time, was driving on the wrong side of the road.  She was a foreigner—a Canaanite.  In Matthew’s account of this meeting, Jesus behaved very much like a man of his culture.  For Jews of this time, Canaanites were to be ignored.  But this woman’s aching need for her daughter’s health caused her to break through the Semitic conventions of that period.  She demanded that Jesus stop and speak with her.

In our day and age, we have an Anglo-Saxon word for female dogs that is often used as a particularly stinging insult.  In his repartee with this dogged woman, Jesus appeared to utilize such language toward her.  But, like a pit bull, this woman refused to let go until Jesus responded to her concerns.  In the end, Jesus, and (by extension) the early Judeo-Christian community of Matthew’s Gospel, expanded his mission and held this foreign woman up as a profound example of faith.

Jesus forever changed this woman’s life by healing her daughter, but it seems to me that this woman forever changed Jesus’ life by causing him to go abroad and confront the limiting conventions of his culture.  It seems shocking that Jesus, the Son of God, could learn something from this foreign woman.  But that appears to be exactly what happened.

This Sunday’s Gospel pointed to the cultural embeddedness that is part and parcel of our human existence.  Besides being American, or Irish, or Polish, or whatever, each of us was raised in a family complete with unique histories, unique customs, unique ways of seeing things, and unique ways of doing things.  That means that whenever two or more people come together, two or more cultures are coming together.  To some extent, every marriage, and every community is an exercise in cross-cultural relations.

In each of our lives, we will be presented with the equivalent of our own Canaanite woman that will ask us to step out of our own shoes to see things from another point of view.  The question is, when that happens, will we be willing, like Jesus, to go abroad and confront the limitations of our own cultural embeddedness?  Or, will we assert that we are the ones driving on the correct side of the road and suffer one avoidable head-on collision after another?