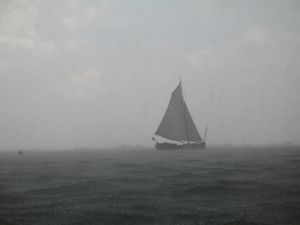 It had been less than five years since my brother Bob and I had moved into our brand new room.  Several seasons of sales successes had allowed my dad to buy and build his dream house.  My sisters’ room was all ruffles and white furniture, and Abbey Road Beatles’ posters.  Our room was adorned with an American Revolution theme including a nautical light fixture and drapes.  My pre-middle school boyhood was stamped with the images sewn into the fabric of those draperies.  On many-a-lazy Saturday morning, I would contemplate the contours of those curtains, studying the machine-dyed representations of Eighteenth Century schooners and ancient New England maps.  In an instant, I could find myself crewing alongside the crafty Captain John Paul Jones outmaneuvering the effete and overconfident English, or displaying a, heretofore, hidden talent for swashbuckling swordsmanship.

In the days of five years earlier, anything seemed possible in my family.  My dad’s swashbuckling genius in sales had just taken us from a cramped row-boat of a house in the city, to a beautiful yacht-like ranch home in the country with a picture-window-view of Lake Springfield.  In those days of prosperity, it was easy to imagine that a “Partridge Family”-like theme song played as our entourage of seven children and two parents improved the looks and average IQ of whatever restaurant, church, or store we entered.  In my Fourth, Fifth, Sixth, and Seventh Grade mind, being a Wagner carried a kind of swagger to it.

But lying in bed, on this night, five years later, the images of maritime victory, and any sort of swashbuckling swagger seemed centuries away, hidden behind a pervasive darkness.  Earlier that afternoon, our family’s theme song had suddenly shifted to a minor key as mom told my brothers and me about the breakup of her marriage.

“Are you asleep yet?”  My brother’s voice interrupted an hour of silent staring at a darkened ceiling.  “Nope.” I answered matter-of-factly.  “Me either.  I keep thinking, ‘Where’s dad going to sleep?’  ‘When will we get to see him?’”  With that, the two brothers who usually goaded one another, competed against one another, annoyed one another, and even fought one another, now comforted one another as they quietly cried themselves to sleep.

This Sunday, many Christian denominations celebrate the Feast of the Triumph of the Cross.  It seems to me that this liturgy somehow accidentally broke off of Holy Week and migrated through the church’s liturgical calendar until it somehow settled into mid September.  Its readings about self-emptying (Philippians 2:6-11), and Jesus being “lifted up” on the cross (John 3:13-17), strike a minor chord, and take us to the Good Friday dimensions of our lives.

One of the things I learned alongside my brother all of those years ago, was the reality of the cross in human living. Anyone who has been on this earth long enough knows that the right set of circumstances can suddenly pull the tenuous bow that binds things together.  Hard won secure jobs can evaporate like steam on a bathroom mirror. Despite the best physical fitness regimen, serious illness can intrude.  A well-intentioned mistake (or a series of well-intentioned mistakes) can expose one’s vulnerability to public scrutiny.

This Sunday’s readings point to an important insight that Bob and I grappled with all those years ago.  It’s not a question of if.  It’s a question of when.  At some juncture, the hard edges of reality will prick holes in our lives.  In moments like these, it can feel as if we are being emptied out like Jesus in today’s second reading.  Bob and I discovered that, in moments like these, a healthy dose of compassion comes in handy because no one, not even Christ, handles these kinds of things in a neat, clean, or tidy way.  My version of Jesus’ “Take this cup” of suffering away, came from Jonathon Edward’s, Sunshine Go Away Today.  I so badly wanted things to mend…wanted to feel better.  “How much does it cost?  I’ll buy it!”

When facing a concurrent version of the cross, it may feel impossible to see the meaning, or the blessing.  Generally, the triumph of the cross is only gradually glimpsed retrospectively.  Through the disciplines of reflection, contemplation, counseling, and mentoring, one can begin to see patterns of blessing emerging from these moments of suffering…these moments of grace.

Retrospectively one comes to see that it is precisely in moments like these, when we are capable of holding our hands open to receive God’s hand that has always been reaching for us. In these moments, the deep down things that really matter become clear.  These are the crucibles where conversions are forged.  These are the birthplaces of life-course changes and second chances.

All those years ago, two brothers who shared a nautical bedroom, found themselves sailing some pretty rough waters.  In their vulnerability, a deeper bond developed, and convictions surfaced about how they would launch their own futures as dads and husbands. The stormy seas of those turbulent years, led them to a journey of deeper reflection about the intersection of grace and the human condition.  Speaking for myself, that journey involved counseling, spiritual direction, retreats, study, and many, many important life’s experiments.

Now, many decades later, our respective journeys have landed us on the solid ground of marital intimacy and fidelity.  Our children are more siblings than cousins.  When you allow yourself to stand in the vulnerability of your suffering, making room for divine presence in your boat, loneliness can give way to solitude, just enough light can illuminate the way.

Is there a situation in your life that is emptying you out right now?  Who are you taking with you in your boat as you sail these rough waters?  Is there room in your boat for divine presence?  Can you take a moment to stand before God in your vulnerability receiving the gift that your emptiness makes possible?