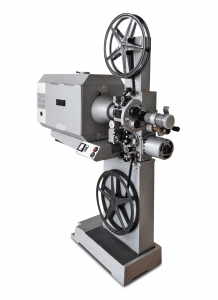 In the archives of my childhood, I am remembering how we would periodically dust off the old projector that my dad had won as a sales incentive.  These were special nights for my young siblings and me.  My older sister, Mary, would pour the old fashioned kind of popcorn (i.e. pre-microwave) into the hissing oil.  Moments later, the sound of a pan scraping back and forth on a coil of electric heat would render the rich corn smell that would cause little mouths to salivate like tiny Pavlovian dogs.

A parent would preside over the living room portion of the ritual.  Various volumes of the World Book Encyclopedia would be tested to see which had the precise thickness required to prop up the paralyzed front leg of the projector.  Next came the work that would test my dad’s ability to transform swear words into child-appropriate sound-alikes.

The wheel of celluloid memories had to be threaded “just so” through a labyrinth of spools, needles and gizmos.  The melodic whir of the projector, and the smell of dust burning off of the hot, fragile projector bulb would signal that it was time to turn off the lights.  If you were incredibly lucky, the former living room, now theatre, would remain dark, and you were off to the movies.  More often than not, the lights would be switched on and off several times, as a parent attempted to get the film to catch onto the receiving wheel one more time. Eventually the movie would commence.

Today’s digital home movies, by comparison, are far more banal than their old time precursors.  In the olden days, home movies had no sound tract.  This silence provided the possibility of a kind of euphoric recall.   (i.e. nostalgically remembering only the good parts of the old times).    With the audio taken out, one could watch a bygone era as if it were ripped out of Norman Rockwell’s notebook.

In today’s “audio-included” movies, it is as if the curtain gets pulled away, exposing details that one would rather forget.  In the silent home movies, one could nurture the illusion that the camera was picking up a moment or two of blissful spontaneity.  The addition of sound can reveal the controlling directions of the cameraman who has carefully sculpted this “serendipitous” precious moment.  In the “good old days,” the tantruming child in the background, along with the scolding parent could be removed from the film by simply turning the camera in another direction.

With today’s digital, sound-included movies, it is as if we are all Emily, the main character in the play, “Our Town.” She was granted her wish to go back in time and relive the favorite day of her life, only to discover that, in reality, she had forgotten that even this “perfect” day was riddled with frustrations and imperfections.

We call it, “Advent.”  Our culture calls it, “The Holiday Season.”  Either way, here it is again.  At this time of year it is easy for our mind to play tricks on us.  If we are not vigilant, we can slip into the expectation that life is supposed to be like a home movie with the sound removed.  During the holidays, it can become tempting to reject the imperfect life that you have in favor of the home movie that you imagine every one else is starring in…

In this Sunday’s first reading, Isaiah (Chapter 40) seemed to be running the home movie projector, casting images of the flawless world that Yahweh would one day initiate.  These images resonate because our faith tells us that our souls are built for Heaven.  The trouble is, we live in a world of an ongoing digital movie with the sounds of imperfection all around us.  The trick is to figure out how to accept the audio tracts of our less than perfect lives, even as we long for that future homeland that Isaiah prophesized when every tear would be wiped away.  What does that look like during the Advent-Christmas Season?

It looks like a single woman or man sitting down to Christmas dinner, across from a newly married couple, feeling the familiar stab of loneliness, and gently accepting that annoying feeling as a normal part of the human condition.  It looks like parents of a disabled child accepting their own transient feelings of anger or sadness when spending a day with parents of able-bodied/cognitively unchallenged children.  It looks like holding open a place for hope that good can still come from all the confrontations in communities like Ferguson.  It looks like a married couple who refuses to quit inviting one another to greater and more mature levels of intimacy, while simultaneously accepting and loving their spouse with all of his or her limitations.  It looks like recalibrating the meaning of the word “wealth” to include the kinds of riches that are not measured by stock market indices, or bank statements during these hard economic times.  It looks like breaking the bad habit of comparing one’s own sometimes complex and turbulent insides with everyone else’s apparently calm and well put together  outsides.

This Advent-Christmas Season, will you realistically adjust the camera of your holiday expectations to embrace the imperfect, yet grace-filled sound tract that comes along with your life?