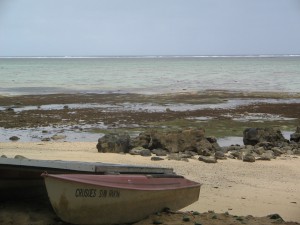 Somewhere in the midst of my career as a high school miscreant, God utilized a high school retreat to train a fire hose full of unconditional, overflowing, transforming, abundant love on me.  Like an amphibian’s slow metamorphosis from a “swims-in-a-pond-and-breathes-water” kind of creature to a “hops-on-land-and-breathes-air” kind of creature…changes were coming over me.

To know the experience of biting into something only to discover that it is not yet fully cooked, is to know what it is like to encounter someone who has only recently begun a process of transformation.  It can be distasteful.  Things that are on their way to becoming something else, can cause a kind of cognitive dissonance.  The phrase, “neither fish nor fowl,” was invented for just such occasions.

When I was still in my amphibious phase of Christian existence, those who had known and loved me were trying to make sense of this new creature that was trying to emerge.   Some old habits still clung to me—habits that were inconsistent with this new life into which I was growing—kind of like an anachronistic tadpole’s tail on a frog.

For example, the way I dealt with the label, “Jesus Freak,” that was occasionally applied to me, illustrated the in-between-ness of my nature at that time.  I had just poured a tall, cold glass of milk at the refrigerator, when my brother, Danny, became irritated with me.  After he had pointed out some inconsistency between my stated philosophy and my observed behavior, he proceeded to call me a “Jesus Freak.”  With that, my glass-of-milk-holding-hand became spring loaded.  Twelve ounces of icy, white, vitamin D fortified liquid immediately leapt from my glass into my little brother’s astonished face.  While it is true that Danny never called me a “Jesus Freak” again, I don’t think that behavior like this did much to improve my candidacy to become his Confirmation Sponsor.

In this Sunday’s Gospel passage (Luke 12: 49-53), Jesus predicted that his followers would eventually experience some turbulence in their lives.  Christ-centered living changes people.  Those changes bring disruptions to relationships.  In my experience, the relationship that is most profoundly disrupted is the relationship with the self.

Whenever someone takes a leap forward in spiritual or emotional maturity, his or her sense of comfort and balance gets disrupted.  The movement from the “old self,” that is known and comfortable, toward the “new self,” that is unknown, but necessary, is frequently sloppy and uncomfortable.  Let me be clear.  The spirit of Christ did not cause me to water-board/milk-board my brother.  The raw nerve of insecurity that he touched when he pointed out my inconsistency caused the bad behavior.

I believe that in this week’s Gospel passage, Jesus was saying that the process of being born again (and again, and again) is messy.  As he listed relationships that would go topsy-turvy, he was attempting to normalize the inherent difficulties that come with on-going conversion.

Marriage and family therapy literature has described the psychological laws of attraction in friendship and mate selection.  When we form marriages, or friendships, we tend to unconsciously gravitate toward people who manifest a similar level of spiritual and emotional maturity.  When one or the other person begins to change and grow beyond the maturity of the friend or spouse, great internal and external turmoil will attend this change.  Such an alteration is frequently experienced as the breaking of an unconscious contract.  A period of dissonance is likely to result.

A friend of mine who once lived on the Gulf in Louisiana told me about an experience of crab fishing with a professional guide.  She noticed that the baskets that held the crabs they were collecting had no lids.  She questioned the guide, “Won’t these crabs just climb out, and all of our work will be for nothing?”  In his Cajun accent, the guide assured her, “No ma’am.  Take a look down into that basket over there.  See how it is that just when a crab is ready to climb out, them other crabs just pull him on back down.  None of them crabs gonna get out ma’am.”

One of the insights to be culled from this week’s Gospel is to quit pulling one another down.  Rather than being alarmed by the transformation of a friend or spouse, we are to view these “in-between” periods of disruption as normal and healthy.  Athletes view a certain amount of muscle pain as evidence of a good workout.  Periodically, God will call you, your spouse, a dear friend, or another family member to change and grow.    Rather than framing the pain that attends one of these invitations as a threat to the relationship, or the self, can you see it as evidence and invitation to growth?