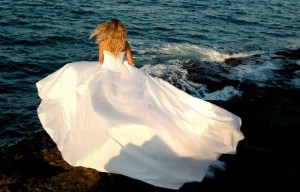 Out of the corner of her eye, just around the folds of her wedding veil, Lisa glimpsed my brother-in-law, Marty, reaching for a cigarette. Without any discussion, she grabbed my hand, and pulled me out of the same reception hall door he had exited a moment earlier. “Marty, could I have one of those?” my wife implored. The next thing you know, my new bride, in her dazzling white dress, veil, and pearl necklace was puffing away on a Marlboro Light. The funny thing was, Lisa didn’t (and doesn’t) smoke.

On this side of heaven, we normally walk around seeing the misleading, indistinct outsides of things. Every once-in-a-great while we are given the grace to see things with God’s eyes. In those moments, we are granted an inside-out view of reality. Squinting in the sunlight, just outside the glare of the wedding day limelight, I caught an insight-out glimpse of something I would never forget: a piece of my new wife’s soul.

Children often have a way of seeing (or at least sensing) the insides of things without knowing how to name them. At least a decade before their divorce, I observed mom and dad in another one of their conflicts. Words were thrown back and forth like heavy old medicine balls meant to topple over an opponent. On days like this, a liturgy of anger would unfold with predictable periods of silence, familiar rote responses, and even roles for the congregation of children. These drama-turgies could stretch on for hours.

But once-in-awhile, something would interrupt this un-holy dance of anger. The phone would ring. My mother would answer in a voice that, a split-second earlier, had been sharpened by the cold, wet stone of anger. As she reached for the phone, it would instantly warm, and lose its edge. “Hello!” The familiar, melodic voice was as warm and soothing as a pat of butter on a stack of pancakes. The listener, on the other end of the phone was carefully protected from the insides of things.

This edifice of harmony was so well constructed that friends and acquaintances would marvel a decade later at how the “ideal marriage” could split apart. While we children appreciated the momentary respite, we saw the insides of things all too well. For more than a decade, we knew the inevitability of the inner realities toward which our parents’ outer rituals of pain and conflict pointed.

In this Sunday’s Gospel (Luke 14: 1. 7-14), Jesus warned his followers to avoid focusing on external things. As usual, he utilized the parable of human experience to make his point. As he observed the glitterati of his day pushing and shoving for places of recognition, he called his followers to let go of the desire for the limelight of superficial honors. His call to humility issued a stout invitation to focus upon the insides of things. The words contained in this passage were like an arrow strung on a bow two thousand years ago that is just now hitting the bull’s eye of its intended, present-day target.

Our current culture is all about the outsides of things. While there may be no scientific studies to prove this point, I would assert that the number one malady from which a majority of our culture suffers is not drug, or alcohol addiction. Our number one dependency that fuels a consumer/Facebook/YouTube society is the ceaseless concern with how we look in other peoples’ eyes.

The concern for how we look to others defocuses attention away from the God-given compass that is accessed only through the disciplines of self-reflection and interiority. Instinctively, my wife knew this on our wedding day. Her dash out of the limelight was not really aimed at picking up a new hobby of smoking. For just fifteen minutes, she needed to step outside to take a breather, and check in with her insides. She needed to recover a humble sense of self before she stepped back into the world of wedding dresses, photographs, head tables, toasts, and all the rest.

I have often wondered what would have happened if my parents’ focus could have shifted. What if they could have, like my wife, stepped out from behind the edifice for a moment and manifested what was inside their marriage to some key people in their lives? Could a humble, non-defensive manifestation of what was inside have given them a new perspective to turn their feet from the pathways of ever-widening divisions?

C.S. Lewis once said that God never reveals what could have been. And so the question I have just posed can never really be answered with certitude. But one thing is certain: God sees the insides of things. In his infinite love and compassion, he saw what no one else could see in those dark years. He alone saw any invisible effort made by either my mom or my dad. He heard their longings, and appreciated every act of repair that they attempted.

When this life is over and the veil that separates us from the insides of things has lifted, we will be surprised by the oceans of love and goodness that have flowed from the most unlikely of people and places. We will be overwhelmed by how much appreciation Jesus holds for the choices we made to love in the quiet, inside places of our hearts.

As the summer ends, and the whir of activity picks up, can you occasionally find a side door out of which you can step to take the measure of what no one else but God can see—the content of your infinite heart?