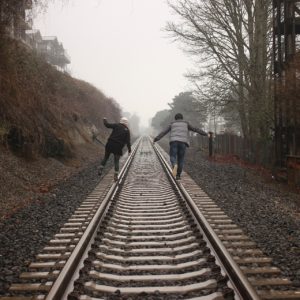 About five stone’s throws from my fifth grade house, a twenty-acre triangle of unincorporated woods was wedged, between a strip of homes on two sides, and a cornfield on the other.  Two substantial pathways cut like brown rivers through the oaks, maples, honey locusts, and sticker-bushes.  With a watchful eye, and slow enough gait, one could just make out a kind of tributary-like third pathway that subtly split off from one of these two main corridors, in the heart of the woods.  A wayfarer who stumbled upon this third passage would soon find himself winding through a hidden thicket.  Just beyond this tangle of weeds, bushes, and vines, some area high school boys had constructed a surprisingly sturdy clubhouse from purloined plywood, plastic, and two-by-fours.

Occasionally, as if we had just stepped off of the set of the movie, Stand by Me, my brothers and I would screw up our courage and dare one another to spy on the mysterious behavior of these older boys.  On days like this, we would imitate Fess Parker from one of our favorite shows of the time, Daniel Boone.  We would flit from tree to tree, “Mingo”-style (Daniel Boone’s mystical native friend) and then crawl on our bellies like reptiles until we were close enough to make out the camouflaged frame of the enemy’s fort.

Unlike Daniel Boone, or Davie Crocket (another one of Fess Parker’s characters) we were not really interested in scouting out the fort itself.  The territory we were trying to glimpse was the mysterious terrain of adolescence that awaited each of us a few steps down our own individual developmental pathways.

On one such adventure, the lack of noise and activity in the shelter eventually led us to take a closer look.  Like a scavenger from the bottom of the food chain raiding a larger carnivore’s still warm lair, we timorously inched our way forward to the forbidden threshold. With wide eyes, and hearts beating in our ears, we tried the teenager’s temple door.  As it swung open, the good, honest maple syrup smell of a Midwestern woods was suddenly replaced with the co-mingled odors of sun-baked plywood and dirt. We stepped through the frame and inspected the pirate’s booty of unsupervised adolescent adventures.  Here on the walls were the accumulated items from countless neighborhood garages and sheds.  “Wasn’t that our life jacket gone missing about a month ago?”

But the thing that grabbed our attention was a stack of magazines over in the corner.  Like chickens that had just simultaneously spotted a June bug, we were on that stack quicker than you could say, “near occasion of sin.”  Sure enough, they were girlie magazines.  If my comrades had been anybody but my younger brothers, I suspect that I would have immediately sat cross-legged in the dirt, and begun uncovering the mysteries that a curious boy’s mind had been pondering for years.  Miraculously, the inner-voice of Sister Mary Leonard overpowered the lower angels of my nature.  My brothers and I immediately took the stack to my mom who ceremoniously dumped them into the indoor trash container at my neighbor’s house.  My mom’s decision to discard them in an inaccessible location displayed her intimate understanding of the fickle nature of boyhood virtue.

In this Sunday’s Gospel (Mark 7: 1-8; 14-15; 21-23), Jesus displayed a profound understanding of the fickle nature of fragile human virtue.  He described the relationship between the internal world of the soul, and external things.  He explained that external practices are not the sources of evil; evil emanates from the human heart.  And this is precisely why an intentional focus on external practice is so important to the maintenance of the human soul.  The things that we imagine and think in the internalworld have a way of showing up in what we eventually do in the externalworld.  Conversely, the choices that we enact in the externalworld have a way of shaping the state of our soul in the internal world.  For we humans, there is an intimate, reciprocal-causal relationship between the internal and the external.

That is why it is essential to periodically take a step back from our cultural milieu and evaluate what is unconsciously feeding our minds and imaginations through the course of our days.  The magazines my brothers and I stumbled upon in the 1970’s were, by today’s standards, not much worse than the slick pages that occupy the check out lanes in the grocery store.  With the click of a mouse, a shot-glass full of a bottom-of-the-barrel-brand of sexuality is available on demand.  Most of us are aware of the need to protect our children from these sorts of unwanted images and messages.  But how many of us have developed an adult sensitivity to the subtle ways in which our culture forms us?

The need to periodically step out of the cultural soup in which we swim is not limited to the realm of sexuality.  It is true that market economies have driven technological innovation, and lifted innumerable people from poverty.  On the other hand the dangers of a pervasive, de-humanizing consumerism can crop up like a weed in capitalist cultures.  Centuries of Jewish, Islamic, and Catholic thought have converged on the insight that personal freedom must be balanced with the concept of what is best for “the common good.”  This insight has been the the cornerstone for anyone interested in the ethical practice of business, politics, and healthcare.

In the current time-zone, a variety of authors have noted a recent American tendency toward an “us,” verses “them” brand of tribalism.  In the last decade, a trend has developed in which people sort themselves into intellectually gated communities.  Like-minded people consort with like-minded people on the same media wave-length. Our self-selected thought-ghettos impoverish discourse, and tear at a sense of community.

This week’s Gospel reminded us that we are made in the image and likeness of God, but every culture since the dawn of human history (including our own) seeks to remake us, into another false image.  Our job is to not let that happen.