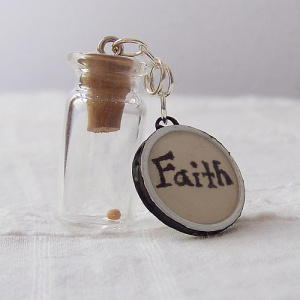 For several years, Lisa and I were in the habit of gathering with a group of five couples.  Safe from the ear-shot of children, we adults would share food, faith, prayer, and off-color humor.  In the summer of 2007, a Rubik’s Cube of vacation schedules, camps, and work commitments blocked our best efforts to convene our monthly prayer group.

At last, after a hiatus of two months, there we were, finding our way to couches, chairs, and significant conversations.  After successfully staking a claim on a choice piece of upholstered real estate, I looked up to find that I had just positioned myself directly across a large coffee table from Mary and her husband John.  Despite a few age-appropriate lines that time and laughter had furrowed into her face, Mary looked and acted exactly like the friend I had grown up with over the last twenty-five years.  How was this possible?

With one eye on Mary, I turned the other eye inward to track the source of a vague disquiet that had managed to insinuate itself into this group, or maybe just into my heart.  It immediately occurred to me that the last time this group gathered, we were praying over Mary the night before her surgery.  Just two weeks before that gathering in June, we had learned that the breast cancer with which she had been diagnosed, would only agree to leave, if Mary would agree to have a bilateral mastectomy.  On that night of praying and loving all those weeks ago, I was amazed at her sense of acceptance, and peace.

On this night, a full two and a half months later, here we were again engaged in conversations that could have taken place on any meeting, any night over the last several years. As usual, John was talking politics.  Just like always, Walt and Jerry were discussing music.   The women were talking about whatever it is that they talk about when we’re not in the room.  Now, seated on my September couch, across from Mary, I was struck by how she looked just the same—how much we all seemed the same—but gradually, it was dawning on me that so much was different.

The topic naturally shifted to that September grade school question, “What did I do with my summer?”  As the conversation chugged around the room, we received the expected updates about work and vacations.  When the conversational train stopped at Mary’s side of the room, tears began to flow.  “I know I am supposed to say, ‘Since my cancer, every day seems precious—like a gift.’  I want to be able to say, ‘Now I am living life to the fullest.’   But it doesn’t feel that way.”  Mary continued, “Around the time of the surgery, I felt God so near.  But now, as I’m trying to get used to this new body, and life has returned to normal, I don’t feel God’s presence anymore.”

In this Sunday’s Gospel (Luke 17: 5-10), the apostles asked for an “increase of faith.”  Jesus replied, “If you have faith the size of a mustard seed, you would say to this mulberry tree, ‘Be uprooted and planted in the sea,’ and it would obey you.”

As a counselor with a Christian spiritual commitment, I regularly encounter men and women who take this quote as an invitation to examine how their spiritual glass is half empty.   The logical syllogism starts with the scriptural quote I have just cited.  From there, some calamitous condition is noted, for example, “I have cancer, ”  or “My child is in crisis.” The next step down the logical spiral staircase goes something like this, “I prayed that the cancer would go away.  It has not gone away.”  Finally, the stair steps end at this dismal conclusion, “Therefore, I must not have faith.”

It is not hard to imagine how a reasonable person could find him or herself descending this logical staircase.  Many of the people I am describing are very much like my friend Mary.  Many times in their lives they have experienced that “all things are possible with the power of God” (Mark 9: 23).  Firsthand, they have seen that God’s power at work in us can accomplish “more than we can ask for or imagine” (Eph 4: 20).  And yet, here is a crisis that will not bend to their will even when they recite every manner of Christian incantation.

In moments such as these, it is important to notice the mustard seed of faith that is firmly planted, taking root, and producing unnoticed fruit.  The spiritual masters of our tradition (e.g. John of the Cross, the author of the Cloud of Unknowing) have noted that the longing for God itself is profound proof of his nearness and intimacy.  My friend Mary reminds me of Mother Theresa who was so close to Christ that she couldn’t get enough.  She is like the wife of a deployed military husband.  The more she loves him, the more she is aware of his absence—the more she wants to feel him near.

I am humbled by the power of Mary’s faith.  Despite the dark valley she is passing through, she still finds within herself the desire to be able to feel the preciousness of life.  Despite an absence of the feelings that go with it, she miraculously holds an inner longing to see every day as a gift.  The way that she shared her journey through cancer with us, the way that she reached out to us and led us to pray for her, formed us more firmly into a community of faith.

Sometimes faith is the tool in our hands that we are given to change things.  Often, faith is more like a plant, quietly growing, taking root, thriving in the dirt of our lives, quietly changing everything.