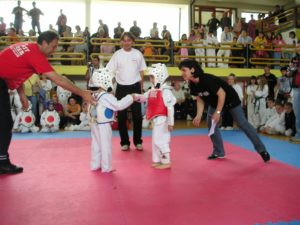 When I was a kid, “Everybody was “Kung Fu fighting.”  On the wide screen, Bruce Lee was dishing it out to hordes of bad guys.  On the radio, there was that cheesy song, but on TV, there was that way cool show that starred David Carradine.  It happened the same way every week.  The main Character, a Kung Fu master named, Kwai Chang, would drift into an old, dusty Western town.  Long before the days of diversity training, or multiculturalism, Chang’s strange looks, and strange ways would attract unwanted attention.  It wouldn’t take long before he had to absorb the kind of physical and psychological abuse that would have made Ghandi, himself, resort to a fist-fight.  Kwai Chang always resisted the temptation until finally, in the last three minutes, he would reach his tipping point, and out came the moves  (“Whooo!”  “Haah!”  Every twelve-year-old boy had his own imitation).   The next thing you know, broken and bleeding bad guys, who had learned their lessons, would be strewn everywhere.  Kwai Chang would then wander off into the sunset.  He was “wicked awesome!”

As a boy, that’s the lens through which I read this Sunday’s Gospel (Matthew 22: 15-22).  All of the bullies in town (i.e. Pharisees & Herodians) were ganging up on Jesus.  “Is it lawful to pay the census tax or not?”  If he answers, “Yes,” then he puts himself at odds with his own people who are the equivalent of France or Poland during World War II.  Instead of being occupied by Hitler’s Nazis, they were being occupied by Caesar’s brutal and hated Romans.  If Jesus says, “No,” he draws the unwanted attention of the occupiers (i.e. the Roman Governor of Judaea).  Like Bruce Lee, or Kwai Chang, Jesus was surrounded, outnumbered, and maybe even out-maneuvered.  Then…out came his moves!  “Give to Caesar what belongs to Caesar, but give to God what belongs to God” (vs. 21).  “Whooh!”  “Haah!”  The bad guys were left speechless, and Jesus road off into the sunset with his rag-tag posse.

That’s the way I read this Sunday’s scripture when I was a kid.  With the right intervention (“Whoo!”  “Haah!”), with Divine Spirit in my heart and life, I could scatter the forces of darkness like a Kung Fu master.  As an adult, I’ve had a few experiences along the way, and I hear this scripture a little differently.  I’ve come to see that like ancient Israel, there are a hundred different Caesars that can occupy my life and levy all sorts of burdensome taxes. Often, what occupies and taxes doesn’t conquer in any obvious way like an army.  It moves into a life more stealthily, more insidiously.  The kind of Caesar I’m talking about silently creeps in and take over outside of one’s awareness in the same way that a virus takes over a body.  With these kinds of viruses, you won’t even know you have it until you feel the symptoms that tell you that you have already been conquered.

Have you ever heard it said, “If you really want to know what matters to you, do an audit of your checkbook, credit card statements, and your calendar.”?   Where someone spends their time and money tells you what really matters to them (as opposed to what they saymatters to them).  In addition to the standards of time or treasure, I think another important measure of personal value, is where they invest their consciousness.  For example, I would invite you to conduct a mental audit of what you tend to think about on a daily basis.  A few years ago, I conducted that experiment, and found out that I was spending way more time thinking about getting ahead at work than thinking about my wife, my children, or my relationship with God.  Don’t get me wrong, there is nothing immoral with wanting to excel at work, but when work overflows its boundaries, and invades other important areas of life, then work can become a Caesar occupying too much mental, and temporal real estate.

In my experience, there are any number of Caesars that can attempt to surround and subvert what I most care about…financial worries, unresolved issues at work, complicated relationships, a culture with seductive values at odds with what I want to stand for…the list goes on and on.  In this Sunday’s Gospel selection, Jesus placed into our hands the most important spiritual tool in our fight to keep the various Caesars in our life in their respective places.  With a rhetorical flourish comperable to one of Kwai Chang’s best moves, he revealed that at our core, we belong to God, and more importantly, God belongs to us.   Therefore, everything that belongs to God, belongs to us.  In the words of Saint Paul, nothing can take that from us.