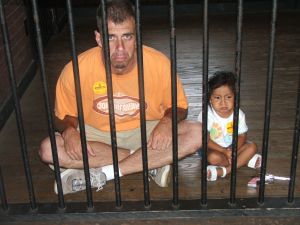 “Thanks to Tom Wagner, the whole class will stay in, and skip PE this afternoon!”  With that one sentence, Mr. Bergner erased four long years of hard work establishing my reputation as a credible classroom entertainer and bon vivant.  Every class clown understands that he lives a precarious existence.  The margins for error are razor thin.  Like a physician, he must abide by the Class-Clown Hippocratic oath: “First do no harm!”  Don’t get me wrong.  According to the Official Bi-Laws, it is perfectly acceptable for a classroom entertainer to ruin his own academic future, and bring down punishments upon himself.  But the moment his antics bring even a thimble full of suffering for his audience, the emperor’s clothes fall away, leaving the court jester exposed and vulnerable.

When I was in fourth grade, Catholic school students were plentiful.  People like me, who were born at the tail end of the baby boom era, were bundled, and stacked into non-air conditioned classrooms like cordwood in the back of a pick up truck.  The promise of an extra afternoon recess on a hot spring day would have been as welcome as a prisoner’s parole for both students and worn out teachers alike.

On the afternoon in question, Mr. Bergner had dangled a particularly tasty carrot in front of our fourth-grade noses.  If we could diligently (and quietly!) complete an in-class writing assignment, an extra-long afternoon of outdoor freedom would be ours.  My spirit was willing, but my ten-year-old-boy-flesh was weak.  In about fifteen minutes I had scrawled out the assignment, looked it over, judged it substandard, wadded it up, and threw it in my desk.  I immediately started over.  In the middle of the starting over, I remembered my duty to my classmates.  With the single-mindedness of a brain-eating zombie, the mantra in my head played over and over again, “Must get a laugh…Must get a laugh.”

Forty-five minutes of semi-clever jokes, quips, and reprimands later, Mr. Bergner called for our work.  When my lack of progress was made manifest, my disgusted teacher chose the nuclear option.  Everyone would suffer for my sins.  Upon learning that my antics had cost us our furlough, my class turned on me the way that Steve Martin turned on John Candy in the classic, Planes, Trains, and Automobiles.  In place of their genial classmate, they saw the laughing face of Satan, himself, who had led them to ruin.  A collective groan filled the room. Whispered insults caused me to hang my head in disgrace like Steve Bartman exiting Wrigley Field for the last time.

I knew that the coveted role of class clown would probably shift to the more intelligent Bill Dey, the more handsome Todd Arseneaux, the more athletically inclined, Paul Bogamill.  In the twinkling of an eye, I could see my penniless, celibate future yawning in front of me.  The thing that abruptly interrupted my death march through Elizabeth Kubler Ross’ stages of grief was the memory of a piece of potential redemption that lay wadded up in my desk.

Immediately, I slammed open the wooden lid, smoothed out the wrinkles, and shot my hand in the air.  I don’t remember what excuse I used, but soon, second recess was restored, and along with it, my classroom reputation, and occupation!  I knew that the wrinkled product that I had placed into my fourth grade teacher’s hand was not my best work, but it was good enough work to get the job done.  On that day I learned, that sometimes, good enough is good enough.

This Sunday, America celebrates Father’s Day.  Christian psychology (first articulated by the letters of Saint Paul) acknowledges that there is a best in us, as well as a worst in us.  Here on Father’s Day, I am forced to acknowledge that there are times when I respond to my children out of a place of love and wisdom.  There are other times, however, when my fathering is influenced by the lower angels of my nature (eg. impatience, anger, perfectionism, fear, etc….).

As I look at my best stuff as a dad, I discover two insights that first came to me in Mr. Bergner’s fourth grade class.  It was there that I discovered one important criterion that I would later use to discern the quality of my fatherly interventions:  “Follow the laughter.”  When my interactions with my kids produce a good-hearted belly laugh from either them, or me, I have seldom felt any left-over regret.  C.S. Lewis once said that a temptation from the devil cannot exist in the same place and the same time as a good-hearted belly laugh.

The second insight speaks to the overly-serious, perfectionistic side of me.  More than anything else in my life, I have wanted to get my husbanding, and parenting correct.  If you also suffer from perfectionism, let me share with you once again, the insight I discovered on a hot fourth grade afternoon.  “Sometimes good enough, is good enough.” Once a child knows in his or her bones that you are crazy about him or her, you can get a lot of other things wrong, and they will turn out okay.

Here’s to those men who have fathered us with “good enough” parenting.  In the upcoming year, can you nurture your inner-class clown and make “following the laughter” one of your guiding principles for your parenting and husbanding?