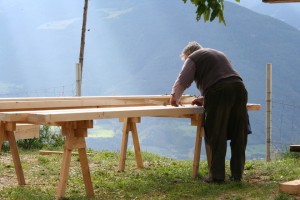 As youngsters, we were convinced that Sister Margaret Alacoque (SMA), and others of her race were not born into this world in any kind of conventional sense. It seemed to us that a creature like this, endowed with preternatural powers was born out of the normal course of things. Like J.R.R. Tolkein’s feared warriors, the Uruk Ai, she, and others like her were formed deep within the recesses of the earth, and emerged full-grown at seventy-years-old with one purpose, and one purpose only: to restore order to the overstuffed classrooms of the 1960’s. She, and other bleached white super-creatures like her (i.e. Dominicans) did not age. Somehow the cogs of time stopped for them. Somehow they maintained their septuagenarian status for many decades (maybe more) until such time as they moved on, Mary Poppin’s style, or Elijah-style to their next unbelievably challenging assignment.

SMA was old school before old school was old school. For example, her tried and true method for teaching multiplication tables was to shout out a simple equation, “Nine times eight!” If it was your turn, your job was to quickly snap out the answer. Even a moment’s hesitation resulted in a crisp slap of her hands, and the command, “Next!” Your only hope was to successfully pull the trigger next time around.

My dad, while not a member of this super-warrior race of educators, did subscribe to their educational methodology. On any given weekend work project, dad would issue his orders. First, he would allow you to set about following his commands with your own ingenuity and methodology. Next, he would detect the fatal flaw in your approach. This inevitably led to a sudden and harsh rebuke in which he would rip the implement from your hands. A frenzied display of the proper technique would follow. Finally, he would restore the tool to your hands. As you nervously mimicked his technique, he would immerse you in a pool of enthusiastic feedback. From a child’s point of view, this certainly was the emotional equivalent of The Agony and the Ecstasy.

Over the years, I have stood in awe watching friends, and now children of mine patiently and expertly solving math, algebra, geometry, and calculus problems. As the hieroglyphics fill the page, I have found myself wondering what kind of DNA differentiates these kinds of creatures on the other side of life’s teeter totter, from the kinds that balance them off on my side of the scales. A similar question has entered my mind when I have observed people with mechanical intelligence, like my friend Jerry. In any given carpentry, electrical, mechanical, or masonry project, I have stood slack-jawed and watched Jerry as if I were a Cardinal’s fan cheering at a Mark McGuire batting practice.

In his book, Outliers, Malcolm Gladwell provided the beginnings of an answer to what differentiates me from the excellent math students in my classes, and the carpentry students in shop class. The answer: twenty minutes. Researchers have discovered that the difference between a poor math student and a good math student is the capacity to endure twenty minutes of frustration until one is able to arrive at a workable way to solve a problem. For guys like me, after thirty seconds of math confusion, a vision of Sister Margaret Alocoque pops into my head clapping her drill sargent’s hands shouting, “Next!” Thirty seconds of confusion is all it takes to prove, one more time, that math just isn’t my thing.

A similar thing happens when attempting anything that requires mechanical know-how. If I can’t immediately solve the carpentry, or mechanical conundrum, some version of a frustrated, critical father shows up in my consciousness. Rather than puzzling out the problem, in my frustration, I conclude that I’m just not very good at this kind of stuff.

In this Sunday’s first reading (1Kings 19), we observed the beginning of the process in which the prophetic torch was passed from Elijah to Elisha. What touched me in that reading was the way in which Elisha’s new way of working could not be learned so long as he stayed in his father’s house. In fact, he had to dramatically leave his father’s way of working behind, and follow his new mentor, Elijah.

Several years ago, I cashed in on an old favor. I decided to surprise my wife when she was out of town by rebuilding our deck while she was gone. My old friend, Dave (who is chock full of carpentry skills) measured, cut wood, and supervised my son and I in rebuilding the deck. David is to education what Elijah was to prophecy. He is from a whole different educational paradigm than Sister Margaret Alocoque, or my dad. At one point, observing a fairly obvious and permanent mistake I had made, he observed in his rural Missouri way, “You know that Native Americans would purposely put a flaw into their handicrafts to honor the fact that it was made by humans.” Thereafter, any mistake John Harry or I made, David would say, “It’s made by humans.” Very patiently David showed me what a father’s love can look like. Little-by-little my hammer became more true, my nails driven with more authority and skill.

More importantly, when I came home and observed the work my son had completed in my absence, I did not shout at him when I observed the wood-pecker marks his errant hammer left on the soft/expensive cedar planks. I emulated my friend and mentor. “Looks like human hands made this deck.”

With the help of a skilled mentor, I was empowered to leave my third grade classroom, and my father’s way of parenting a son behind. Thanks Dave for making me more human.

One Reply to “Made by Humans”