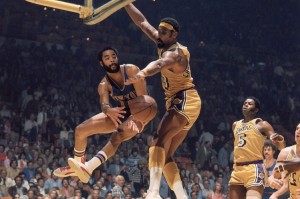 Having made the cut, it was time to suit up for my new basketball team.  While divvying up eleven uniforms for eleven boys, Coach Mancy discovered that two of his jerseys were labeled, “10.”  The only logical solution, according to his way of thinking, was to remove the first digit from one of the number “10” jerseys.  That’s how I officially became the first player (and maybe the last) in league history to sport the number “zero.”  Whenever a score-keeper or fellow athlete laughed at the anomalous numeral stitched onto my fore and aft, I would repeat a line that my father and I had rehearsed for these occasions. “It’s better than nothing.”  Learning to use self-deprecating humor to turn an insult into a shared laugh would later prove to be an important tool for a boy destined to forever stay guard-sized.  At some level, I had caught the message that my dad was trying to humorously convey:   “Pursue your passion regardless of what others think.”

The summer after my rookie year, Wilt Chamberlain, Jerry West, Gail Goodrich, Elgin Baylor, and all of the rest of the 1970 LA Lakers inspired me to transform our driveway basketball hoop into a 60,000 seat arena. Equipped with an active imagination, and hours of solitude, I imagined myself a sharp-shooting, sky-hooking, buzzer beating NBA star.  Months later, when the boys of winter reconvened on the hardwood, my hours of driveway-highlight-reel moments paid off.  I was assigned the role of point guard, and given a brand new jersey with a real live prime number embroidered on it.

By the end of the regular season, we had earned ourselves a spot in the playoffs.  Getting through the first round of our bracket involved making it past the high-octane, run-and-gun, Trinity Lutheran team.  Just before that game, my dad showed me a defensive maneuver designed to single-handedly shut down a fast breaking team.  It worked.

After the high fives subsided, and we made it home, my dad pulled me aside.  I was all set to celebrate the results of what he had taught me.  Instead he used the occasion to provide me with corrective feedback.  “You played great son, but whenever something bad happened during the game, you would get this embarrassing look on your face. ” With exaggerated facial gestures he provided an imitation designed to shock me into keeping better custody of my facial muscles while competing.  “You looked like a baby.  Don’t do that anymore.”

Instead of celebrating and carrying the momentum of our last game into the next, dad’s intervention resulted in the unintended consequence of a burdensome self-consciousness.  Rather than getting into the flow of the game, I caught myself wondering how I was appearing to the people in the stands.  With my attention firmly focused on how I appeared to others, rather than on my love for the game, I made mistakes I hadn’t made since my rookie year.

Palm Sunday is a feast that confronts us with the fickle dimensions of human nature.  The palm frond placed into our hands to help us celebrate Jesus’ victory lap into Jerusalem, quickly transforms into the Good Fridaylash as we hear our own lips shout, “Crucify him!”  “Crucify him!” during the Gospel proclamation.

As I walked alongside Jesus through the 39 verses of this year’s Palm Sunday Gospel, I was struck by how resolutely he was able to keep his focus.   It didn’t seem to matter where the shifting winds of public approval were blowing.  Jesus kept his gaze focused, not on other’s appraisal of him, but on his own mission.

A humble, but nonetheless profound insight from this week’s scripture has to do with where we place our gaze. To do anything of any value, even to win a sixth grade basketball tournament, we must resolutely refuse to look at ourselves through other people’s eyes.  Any time we spend wondering how we appear to others is a diversion from living out our calling.  The question is, how do we develop this skill?  How do we silence those inner voices, who like my sixth grade dad, bid us to examine how others are either fairly or unfairly viewing us?

Like a little boy watching and then practicing to become like his basketball heroes, the church asks us to immerse ourselves in Christ during the sacred liturgies of Holy Week.  By prayerfully identifying with him during the sacred events of this week, we are to absorb something of his passion, something of his personhood, and bring it back onto the hardwood of our own life experience.  Before and after the great events of his life, Jesus would escape to a lonely place for alone time with his Father.  There he found intimacy, there he reconnected with his mission, there he found a resolve to carry things through to their completion.  Prayer is like a good workout.  Anytime we give ourselves to God in prayer, we strengthen those muscles that are able to withstand other’s positive or negative opinion.  In prayer, we get our gaze off of ourselves and back onto what matters…love of this game we’ve been invited to play with our whole hearts.