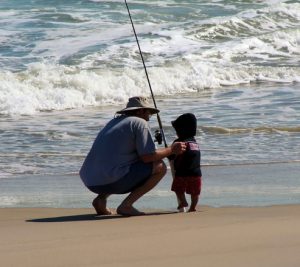 By holding the weighted end on the bottom, and the buoyed end on the surface of the water, two people could drag the creek for fish bate.  The first run yielded a couple dozen or so acrobatic minnows, and baby mud cats that eventually found their way into our bucket.  On the second pull, dad instructed us to drag our bottom hands through the mud.  Up from the depths came writhing crawdads.  They slapped their tales in outraged at their unthinkably bad fortune of living out the remainder of their shortened lives as fish bait.

Looking back, dad must have purchased that seining net at “Hogwarts” or some other wizardly apothecary.  It was clearly magical.  It had the power to erase years off of a dad’s age.  Each time that net breached the surface with another round of zoological, and ichthyologic treasures, three little boys, and one over-sized boy stood united in childlike excitement.  Oohing, ahing, and laughing, we loaded up our bucket until we harvested enough bate for somewhere around seventy-five hooks.

My brothers and I were ill prepared for what was to come when our father-son activities shifted from bait catching to fish catching.  As we traded in our nets for hooks, we discovered that there were two distinct parts of my dad’s nature that were as different as Gavin McLeod’s Captain Merrill Stubing (The Love Boat, circa 1977 – 1987), and Captain Bly (Mutiny on the Bounty, 1932, Charles Nordhoff).

Once the seining was done, and the fishing had commenced, dad would sit in the back of the boat baiting hooks, or harvesting fish, while his boys took turns churning the creaky oar-locks.  To his dying day, dad would tell you that his profanity, and anger-laced tirades, barked from the back of the boat, represented a skillfully crafted strategy.  His aim, he would say, was to counterbalance my mom’s Dr. Benjamin Spock-soft style of parenting.  Despite his rationalizations, it always seemed to me that his coxswain’s style was more informed by frustration, or a prior trip to his favorite watering hole than a coherent parenting strategy.

Here on Father’s Day, I find myself contemplating the famous Mustard SeedGospel parable (Mark 4: 26-34).  In it, the smallest, least conspicuous of all seeds, manifested a hidden power.  In the fullness of time, strong branches sprouted from it that could support and shade many forms of life.

In retelling Jesus’ story, Mark invited us to reflect on the true nature of power.  Harsh words, and an intimidating manner can illicit a kind of fear that gets immediate action.  As a dad, I know that threats and a raised voice can peel a child off of a couch and onto a chore.  But in the long-run, the power of the Kingdom of God is sown more effectively by slowly, and steadily sowing a thousand mustard seeds of intentional love.  True and lasting authority grows best in this kind of soil.

Where have you experienced this kind of masculine power?  Was there a dad, a grandpa, a coach, a teacher, or an uncle who manifested the hidden power of the mustard seed in how he nurtured, disciplined, and mentored you?  If you are a dad, in your parenting, do you more often stir up storms, or calm the seas in your house?  What kinds of seeds are you sowing in your own mission as a dad and mentor?