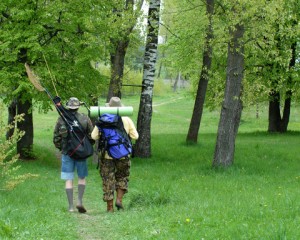 I spent the better part of my young adulthood attempting to rewrite Robert Frost’s poem, “The Road Less Traveled.”  In my updated version, whenever “two roads diverged in the yellow woods,” you would find me launching an extensive scouting expedition.  First, I would reconnoiter one pathway several miles (e.g. six years studying for the priesthood).  Next, I would return to the original point of divergence (e.g. leaving the seminary) to conduct a second exploratory journey down the previously neglected byway (e.g. dating first one woman, and then another for a grand total of four years).  Eventually, on each pathway, some obstructive undergrowth would crop up, turning my footfalls back in the direction of the familiar stem in the “Y” shaped path.

There, I would bivouac for several years reviewing the data from those trips in the hope of making a vocational decision form-fitted to my peculiar soul.  I felt like someone camped out on the “Go” square in a game of Monopoly.  While my high school graduating class was putting houses on Boardwalk and Park Place, I was still rattling the dice on my first real throw.

To describe the factors that prevented me from staking a claim on my own less traveled road would take several chapters of a decidedly prosaic, un-Robert Frost-like book.  The contents of that yawn-inducing volume would meander through a thicket of fears that resulted in self-defeating perfectionism.  The levers that God employed to pry me out of my quagmire included spiritual direction, counseling, retreats, journaling, Al-Anon meetings, and plenty of prayer.  But in addition to all of those path-straighteners, there was my old friend Richard.

Richard functioned as my own personal polygraph machine.  Whenever I was less than truthful with myself, Richard was willing to call me out.  During the young adult period of indecision in my life, he was the Abraham Lincoln to my General McClellan—always urging me to break camp and get moving toward some decision—any decision.

When God finally knocked me over the head with Lisa, it was Richard who said, “If you don’t ask her out, I’m going to call her and ask her out for you.”  Once launched down the pathway of betrothal, Richard’s encouragement and challenge kept my cold feet walking along the warm pathway to my current life as a dad and husband.

In this Sunday’s Gospel passage (John 1: 29-34), the reader, found one of the signature relationships of the New Testament:  Jesus and his cousin John.  As you watch their lives unfolding, you have to wonder if these two made some kind of a childhood pact with one another.  Because whenever two roads diverged, John the Baptist, and his cousin Jesus always seemed to take the road less traveled—the one that involved telling the unvarnished truth, and living out of that truth.  It is not hard to imagine these two playing together, walking together, sharing meals with one another, laying out under a nighttime sky uncovering an emerging understanding of their identities and intertwined missions.

My friend Mitch and I eat breakfast together on most Saturday mornings.  During one of these meetings recently, we were noticing how much harder it is to confront and change habits now that we are in our fifties than it was when we were in our twenties. In that moment, we made the kind of pact that Jesus and John must have made as young men.  We decided that however old we get, we will challenge one another to growth and change.  When confronting an unloving, or limited attitude, rather than saying of one another, “Well, he is who he is,” we will make every attempt to say, “You can be more.”

It seems to me that this Sunday’s third reading captured an essential ingredient in living out a life informed by Spirit.  If we are to seriously live a life guided by the Light from within, we have to nurture deep relationships where we share the unedited version of our heart with a close friend or friends.

In my work with couples, I have discovered an invariant truth.  Where you find a superlative marriage, ask a few questions, and you will soon discover that both spouses maintain close friendships where they really open up about the internal workings of their lives.  In those friendships, they are challenged to come back to their marriages and families with greater insight, more tools, and increased intelligence for the loving.  In a no-holds barred friendship, like the one between John and Jesus, we are challenged to be our best selves.
Who is in a John the Baptist-Jesus relationship with you?  Who is it that you really open up to about your marriage, your parenting, or your life as a single, or religious?  Sharing on a deep, personal level about the daily “living out” of your vocation allows a trusted friend to speak truths to you that you cannot discover with the blinders of only your own insight.  Does your friendship with this person consistently make you a better husband, or wife—or a better you?  For whom are you a John the Baptist, speaking the truth, even when it is difficult?  Whose vocation and sense of mission is fed by knowing you?

One Reply to “Never Walk Alone”