“It’s nothing personal” the eagle said to the rattle snake as it soared higher and higher on its way to dropping its nearly dead meal for the third time.  “You, more than anyone else should know, a guy’s gotta eat.” 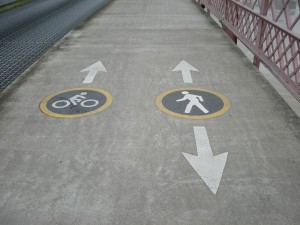 Seven years ago, I accepted the offer to join in on the final leg of a long bike ride with some old college friends.  I peddled for my life up and down (but mostly up) the ridges that define the Mississippi River Valley in Calhoun County, Illinois.  Somewhere inside I knew, like a raptor’s meal victim knows… “It’s nothing personal.”  And yet it felt personal, like nature herself was taunting me.  “So you think you can just zoom up my hills because somebody put a ribbon of asphalt through them, and gave you a bike!  We’ll see about that!”  I had hoped against hope that just around the bend up ahead, there would be a pause, a blessed respite, maybe even a downhill where I could coast for a few life-sustaining moments.  Instead, as I chugged my bike around that uphill corner, I was greeted with another four-tenths-of-a-mile of verticality.  On the outside of my head, unbelievably, the birds still sang, the crickets still chirruped.  Inside my head, the music from Psycho’s shower scene screeched.  The scenery inside my head, was Edward Munch; the outside scenery was Claude Monet.  As usual, the trees were indifferent to the life-or-death drama unfolding below them.  My struggles seemed beside the point to them.  Nothing personal.  Over the last century and a half, they’d seen it all.  To them, I was just like all the opossum, or raccoon that have attempted to navigate this stretch of asphalt.  “Maybe he’ll make it. Maybe he won’t.”

Up ahead, I could see my more experienced colleagues standing on their pedals grinding confidently up and up and up. As if I were a pathetic illustration for that old saw about “the definition of insanity,” I got up out of my saddle, one more time and stood on my pedals hoping against hope that the result would be different than the last half-score of times I had tried to stand up and pedal.  Alas, the same crushing results…too much effort for too little result.  But here was something alarmingly new.  I could feel the last reserves of precious pulmonary resources drain away.  I flopped back into my seat, and willed my feet to push on the pedals (“One, two, three, One…two…three).  I made it to the top…barely.  There I found my friends calmly soaking up the beauty of a scenic overlook, their faces, serene as the country flowers they beheld.    “I…huff, huff…can’t…huff, huff…catch…huff, huff…my breath.”  It took a full fifteen minutes of head-between-the-knees respiratory therapy to tame down my hyperventilation.

Once I got my breath back, I spat out a curse against the hills.  Paul, the tour’s organizer, wouldn’t have any of it.  “Hills are our friends.”  He joked.  “Your problem isn’t with the hills, it’s with your training.”

In this Sunday’s Gospel (Luke 12: 32-48), Jesus described a manager of servants who grew flabby in his work habits and ethics.  He juxtaposed this ne’er-do-well with a manager who was prepared for the owner’s periodic site visits.  The unprepared manager, we are told, “shall be beaten severely.”  On the other hand, the manager who made proper preparations would sit down to an awards banquet and be treated as if he were the owner, and the owner was hisservant.

Perhaps it was midlife, maybe it was ego, but I couldn’t abandon my fledgling cycling avocation without a fight.  I started my hill training in earnest.  I began with the short hills near my home, up…down…up…down.  Next, I graduated to steeper hills.  I remember the feeling of accomplishment when I finally made it up the granddaddy of all hills in my neighborhood:  a mile of vertical torture.  Finally, that stretch became the place where I did my repetitions.

Around this time, I went on a ride with the six-year-old version of my son, John Harry.  At one point, we came to a 1/8thmile incline.  “Oh no!”  Not another hill!”  The well-trained version of me replied, “Son, the hills are our friends.  They’re here to teach us.  Listen to the hill as you ride on it.  It has something to tell you.”  My tiny empiricist immediately informed me, “Hills can’t talk!”  “Give it a try,” I cajoled.  At the top I asked my son what he’d heard.  There was a note of surprise in his response, “The hill did talk to me.  It told me I’m more powerful than I thought I was.”

It seems to me that in this Sunday’ Gospel, Jesus was just pointing out the obvious.  It’s nothing personal.  Life is hard. During significant stretches of the journey, the up-hills will outnumber the down-hills.  If we have not done our training, it is not God, the irate parent who will beat us, it will be the inevitable up-hills of life that kick our behinds.  If we have done our training, we will notice more Claude Monet in our surroundings, and less Edward Munch.

As the slower rhythms of summer give way to the more hectic pace of September, what is the training regimen you will use to keep in shape?  What are the spiritual exercises that help you up the inevitable hills that come your way? With the right spiritual exercises, perhaps you will find that on the next set of life’s hills, you are more powerful than you thought you were.

2 Replies to “Nothing Personal; Time to Train”