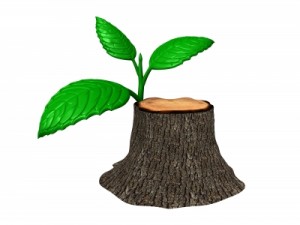 On that day, a shoot shall sprout from the stump of Jesse,
and from his roots a bud shall blossom.
(Isaiah 11: 1)

The heart is a bloom
Shoots up through the stony ground
(Beautiful Day, U2)

The wine goblet lifted in a toast on our springtime back porch must have been forged from discarded magical scraps collected from a bin at Hogwarts. As I gazed down into that enchanted stemware, that had just moments earlier been raised in a benediction, the outlines of a scene emerged that had once transpired on the same porch just over a year ago.

Several promising dates into a potential relationship had produced another fizzle. At forty years of age, our dear friend, Mary, had come to a crossroads. “Maybe I’ve had it all wrong!” She mused over a cup of after-dinner coffee, “Maybe I was supposed to be a single woman for my life?”

Acquaintances, who judged by appearance, would speculate when they heard news of another failed relationship, “Maybe she is incapable of commitment?” Well-meaning relatives would wring their hands at family functions querying about the latest prospects. Here and there people would ask if she had thought of dating, “Phil,” or “Bob,” or “Henry.” In an attempt to provide comfort, her grandma once told her, “Don’t worry honey, for every old sock in this world, there’s an old shoe out there somewhere.” On our back porch, over a cup of stout coffee, Mary was contemplating her future existence as a shoe-less, forty-year-old sock.

Mary was an attractive, intelligent, faith-filled woman. From the time of her First Communion at seven years of age, she had prayed that God would send the right person into her life. She wanted her future marriage to grow on the sturdy root-stock of God’s will. But she also knew that, God helps those who help themselves. So she did all the marketing and product development stuff that Oprah and Doctor Phil said she should do. She let friends fix her up on blind dates. She would go to functions where she knew that the conditions were favorable for encountering eligible, masculine life forms. She got herself all hooked up with organizations of people who engaged in hobbies that she liked. Her well-reasoned intuition was that, while opposites often attract, it’s the similarities that lead to marital satisfaction. She continually put the word onto the street that she was looking for Mr. Right. The problem was, that Mr. Wrong was the one who inevitably intercepted her messages and showed up at her doorstep.

On two separate occasions it took her years to discern that a relationship that she had been feeding and watering had failed to grow roots. On one of these occasions, Mary put the ax to the relationship. On the other Mary was the one who eventually got stumped.

In this Sunday’s first reading (Isaiah 11: 1-10), God’s chosen people appeared, like my friend Mary, to be stumped. Their leaders had made foolish alliances that resulted in disaster. Their kingdom had been divided. Assyria was threatening to gobble up the whole Middle East. In the midst of this gathering gloom, Isaiah preached a word of hope. The present dark state of things would not be the last word. In this short passage, Isaiah was telling his heart-broken compatriots that their God was capable of making new life sprout from a seemingly useless old tree stump. The seeds of promise planted in the days of Sarah and Abraham, Rebecca and Isaac, Raechel and Jacob, Nittzevet and Jesse, were still quietly, and invisibly growing. God wasn’t finished with his people yet. A promised land still awaited. He was just taking them the long way home.

When I finally broke the spell and regained custody of my imagination, I rejoined my contemporaneous colleagues in the current time-zone on our porch. There I found my wife, Lisa, with Mary and her brand-spanking-new fiancé, John. After several rounds of back-slapping, hugging, and toasting, the evening gave way to conversation. Mary and John were reflecting back on the circuitous pathway that led them to each other. At the time, their failed relationships and false starts seemed like nothing more than a useless wasteland. But from the vantage point of our back porch, and the new life that was springing up for these two, the seemingly barren past, now appeared to be the necessary fallow season of the growth cycle. Old relationships that seemed like nothing more than false starts were God’s classroom where important lessons of self-understanding and relationship maintenance were learned. The prayers of a seven-year-old at her First Communion were being answered over all of those decades in some unexpected ways. God had taken Mary and John the long way home.

In God’s economy, nothing is ever lost. For those who have courage born of hope, like Isaiah, to look past the appearances, all things work together for the good. Nothing is ever wasted. God gathers up our history, redeems it, and hands it back to us as a gift. Even when we make the wrong decision, God has a way of taking that and fashioning a blessing out of it for us.

Hope, unlike “Pollyannaish” optimism, is capable of acknowledging the dark cloud that accompanies the silver lining. Hope is unafraid to acknowledge the state of being stumped. But hope is that inner voice that tells us to never bet against God’s power to do something new. Hope is that unquenchable place inside that keeps looking for a fresh young shoot to sprout from even the most unexpected of places.