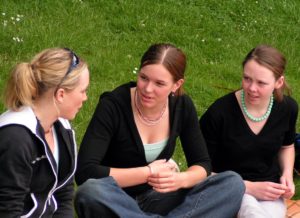 In the pages of this article, I described a presentation given by the thirteen-year-old version of my daughter (she is now 22).  Shortly after that speech, the sponsoring organization offered her an opportunity to attend a leadership retreat.  I encouraged her to accept.

Since my daughter’s school would not be represented at this gathering, I agreed to tag along as the required chaperone.  Three weeks before the kick-off, I discovered that every child in attendance, except my middle-schooler, would be at least a senior in high school or older.  This news caused two horrific scenarios to play in my head.  The first involved watching my yard-stick of a girl feeling excluded…pining away in her room…while the rest of the kids engaged in some form of senior-in-high-school-fun.  The second scenario was even more frightening.  It involved imagining my daughter feeling included…and not pining away in her room.  Instead, I imagined her precociously engaging in various forms of senior-in-high-school fun.  Immediately, I invited Annalise to call around and see if any of her middle school friends would be interested in making the trip with us.  Two accepted.  The next thing you know, Dr. Tom was stepping on board a plane with three newly minted teenagers bound for LaGuardia, then Grand Central Station, then a retreat center fifty miles outside Manhattan in rural New York.

For five days, these girls listened to talks, and engaged in activities designed to give them a way to think in deeper ways about issues of sustainability.  During the final wrap-up activity, our little group was to talk about how we could bring the lessons of this retreat home.  Together, they mapped out an idea that involved showing other schools how to initiate student-driven sustainability projects.

Juiced up by the idea of my daughter exercising her leadership muscles in this way, I began to make a sales pitch for a potential next step on their journey.  I reminded them, that on this retreat, two Saint Louis area superintendents and their principals were having a similar conversation. “Let’s make contact with them right now, and pitch your idea for one of their schools.  You guys can get the ball rolling right away!”  I jumped up and started leading the parade.  When I turned around, no one was following. “Come on Annalise, here is your chance to get your dream started.”  Still firmly seated she replied, “I don’t want to dad.”  “Well if not now, then when will there be a better time to make a contact?”  I reasoned. It seemed so obvious.

I was hoping that my daughter would have chosen this moment to grow her leadership muscles.  What I hadn’t counted on, was her choice to exercise those muscles on me. She proceeded to give an impromptu little speech about her freedom, and rights, and not being forced to do things she didn’t want to do.  “Whose project is this anyway, yours, or ours?”  Her two fellow-eighth graders were like congregants in a Baptist church, “Amen-ing” their preacher.  By the time she was finished, I sat chastened, and silent, pondering this new landscape of parenting an adolescent.  In my head, I heard the words I have spoken to countless parents of adolescents, “Everybody wants an assertive child until they get one.”

This Sunday’s Gospel (John 6: 24-35) served up a slice of conversation from a long dialogue regarding the Eucharist.  Without any sense of irony at all, the crowd, still full from the miracle of the Loaves and the Fishes, demanded a “sign,” that Jesus was the Chosen One of God. Earlier in the narrative, he diagnosed their inability to grasp what he was offering them.  They were looking for him because they “ate the loaves and were filled.”  They couldn’t see beyond the free lunch they had received to its intended meaning.  Jesus was offering them so much more.

It seems to me that the Eucharist always asks the believer to look beyond the surface of things. When my daughter had finished her little lecture, I had to restrain the urge to launch into my own little soliloquy…something about… “after all that I had done for you on this trip…etc….”  But if I simply reacted to the words of her speech, I would be missing the invitation Annalise was offering me.  To live a Eucharistic life is to look beyond the surface of things.  My daughter was not disrespecting or disregarding me.  She was taking a developmental step forward toward individuated adulthood.  Being able to assert herself, and say “no,” to her father was an important step forward in her maturation.

When we hold out our empty hands to receive the body of Christ, it is as if we are holding open our whole lives.  When we consume Christ, we make a pledge to carefully, and reflectively look beyond the surface, to see things through the eyes of Christ.  Over the last several years, I have shared a geographical spot in the Body of Christ right next door to an emerging adolescent.  Just like the elements of bread and wine are transubstantiated, I have learned that my life has to be transformed over and over again.  I have tried my best to become the kind of father who can both firmly and flexibly receive this emerging young adult into the world.  It seems to me that the natural rhythms of the family lifecycle call each of us to this kind of transformation on a daily basis.

As I continue on this journey of launching one young adult, providing a semi-permeable membrane for a college student, and parenting a fourteen-year-old, everyday I experience the need for an ongoing source of energy, humor, intelligence, patience, humility, companionship, and compassion.  This week’s readings were all about where you and I can find bread for this kind of journey.

One Reply to “Nutrition for the Journey”