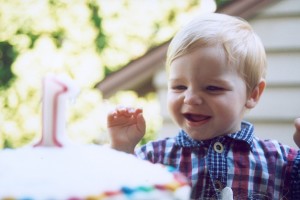 Six years ago, my youngest daughter convinced me that the kids from Generation Z (kids who were born in the 2000’s) took a rain check on their Terrible Two’s.  For this age cohort, the “Thorny Three’s” became the new Terrible Two’s.  Every parent says they want their child to be autonomous and independent until their child shows up with the stubbornness and inflexibility that come with those gifts.  A two-year-old occasionally tries on autonomy and independence in the same way that they might play dress-up with a cowboy or ballerina costume.  It’s temporary.  For a three-year-old, autonomy and independence are the shoes and socks they walk around in all day long.

The trouble with the age of three-years-old is that it might possibly be the cutest age on the planet.  My daughter, Lizzie, had (and has) a dimple, that is to a smile, what rhubarb is to a fruit pie.  God positioned a dimple on her face to put an exclamation point on her grin.  That combination of charm and stubborn inflexibility, and the way she could oscillate between the two at a moment’s notice, presented something of a curve ball to her enchanted, bewildered, Ph.D. prepared father.

As second grade version of my son (now fourteen years old) tore into his pile of First Communion loot, a characteristically three-year-old question began to surface within three-year-old Lizzie.  “What about me?”  That’s when she began her mantra.  The Dali Lama himself could learn a thing or two from my daughter when it came to chanting the same phrase over and over again.  “I want to open a present,” she announced halfway through the gift exchange.  “You wish it was your turn to open a present, but it’s John Harry’s turn,” I responded in my best Dr. Tom expert voice.  Like water beading off of a freshly waxed car, my words found no home in her ears thoroughly waxed by her single-minded desire for gifts.  “I want to open a present,” she repeated.

Worn down by two days of party preparation, and two First Communion celebrations, Dr. Tom did what he tells every parent who hopes to stake a long-term claim on mental health not to do.   I made sacrifice to the three-year-old volcano god in my living room.  I remembered a birthday present that never found its way to the party my son was supposed to attend a few months ago.  I quickly wrapped it, and proudly displayed it to my momentarily appeased three-year-old potentate.  Like a skilled fishing guide gutting a catfish, she made short work of the paper.  She examined the contents, glanced over at her brother opening his fourth present, and said, “I want to open a present.”

I would like to say that I didn’t wrap up a second present.   I would like to say that I have always practiced what I have preached to the parents who look to me for advice.  But worn down by the combination of tiredness and three-year-old narcissism, I became the poster child for ineffective parenting.  After a momentary second pause, Lizzie looked up from her second gift and put the needle back down onto her broken record.  “I want to open a present.”

On the following weekend after this humbling evening, my wife and I cashed in on a gift certificate to a bed and breakfast.  I booked the baby-sitter.  I packed candles, a bottle of wine, and the kind of treats that would make my wife think that she had married a character from some romantic movie.  After saying goodbye to the kids, we left for a two-night stay in an impossibly romantic bed and breakfast amongst the vineyards of Missouri’s wine country.  I had honey-mooning on my mind.

After eating an early dinner, and taking a leisurely stroll, we made our way back to our own private cottage.  Shortly after we had unpacked, my wife stretched out on the antique bed and proceeded to fall fast asleep.  That’s when I discovered that deep within the recesses of my psyche there lives a robust, narcissistic, “I want what I want, when I want it,” three-year-old.

My inner three-year-old began to chant the equivalent of, “I want to open a present,” and,  “Some second honeymoon this is turning out to be!”  Fortunately for me, the full-grown adult that also occupies my soul remembered what happened the last time I allowed the inner three-year-old to get a hold of the car keys to my psyche.  I took a walk with a journal and a pen and externalized my internal dialogue on paper.  Next, I prayed a form of self-emptying prayer that went something like this, “God help me not to be an idiot.”  Then I treated my inner little fella to cookies and milk, and went to sleep myself.  If I had allowed my inner three-year-old to throw an “I want to open a present” kind of tantrum, the honeymoon would never had a chance to really show up in its own time.  By parenting my inner child, the honeymoon arrived after my work-exhausted wife was able to get the rest she needed.

This Sunday, we celebrated the Feast of Pentecost and were reminded once again of our Confirmation into adult faith when we claimed the gifts and the fruits of the Holy Spirit as our own.  The funny thing I have noticed is that the adult gifts of the Holy Spirit do not eradicate the inner three year old that lives within each of us.  The gifts of Wisdom, Counsel, Understanding, Knowledge, Piety, Fear of the Lord, and Fortitude are meant to be utilized, not only in relationship to the Christian Community and the world.  Those gifts are meant to be applied, first, to the task of parenting our own charming, stubborn, inflexible three-year old that lives within each of us.

One Reply to “Parenting the Inner Child”