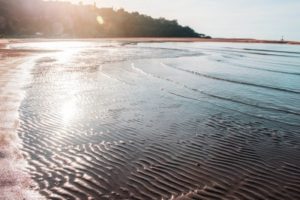 At 12:30 in the morning seven years ago, I learned what a headache would sound like if it could transform itself into music. Just outside my door, three repetitious notes blared in an endless loop, over the top of a deep, droning base, while an baritone male described unprintable scenarios with an occasional rhyme stapled onto the end of a phrase. This particular selection lasted for at least fifteen minutes, followed by another masterpiece of the same quality and length, and then another, and then another.

On behalf of my road-weary wife and I, I called the hotel lobby and asked when we could count on the throbbing noise outside our door to cease. The very polite hotel representative informed me that “the loud music would stop by around two in the morning,” at which time it would be replaced by different party music until 4:00am. Then, “the party deck” would be shut down for the night. I’m sorry sir, but this is Spring break.”

We had always wanted to take our family on a camping vacation near the legendary beaches of the Florida panhandle. And so, when our stay in my father-in-law’s time-share in Orlando expired on a Friday, we thought we might take a two hour detour and explore the Panama City, Florida area for a night and a day toward some future date when we might camp there.

At the time of our check-in, we noticed that, save for a five-by-five, cherry slow-gin-stained carpet by our bed, that the rest of the room sported hard, hose-down-able surfaces. I don’t know how long I stood slack-jawed on our balcony with a “Toto, we’re not in Kansas anymore” look on my face. Six stories down, around the pool, around the Jacuzzis, and on the dance floors, scores of college students were playing out various scenes from thirty years worth of National Lampoon movies. I slowly backed away from the balcony, and willed my gawking face back inside, lest my kids one day remember their dad as one of those parents who watched raunchy movies while constantly repeating, “That’s terrible!” “That’s terrible!”

The next day, I went out to the parking lot to gather up our beach accoutrements. On the way, I passed a young man with beer bong fitted on his head with several hoses emanating out from it like an octopus hat. Up ahead, I overheard a young adult man in a conversation with some very young co-eds inviting them to smoke exotic vegetables with him. As they passed, I took the opportunity to interrupt their walk. “Excuse me. Your parents called. They told me to tell you not to smoke pot while you’re here in Florida.” The girls laughed good-naturedly, while the boy assured me “It’s okay, I’m twenty-five.” Non-good-naturedly I replied, “And they told me to tell you to avoid anyone who is twenty-five who wants to get high with you!” At the pool, nineteen and twenty-year-old’s were gulping screwdriver’s at ten in the morning. I asked the security guard, who stood next to me, “I wonder what the emergency rooms are like in this area?” “Very, very busy!” was his response.

In this Sunday’s first reading (1 Samuel 16: 1b, 6-7, 10-13), we watched as Jesse’s son, David, was selected, anointed, and placed on Israel’s royal throne by the prophet, Saumuel. It occurs to me, that like Samuel in today’s first reading, a key role for a father is to bless his sons and daughters. In the unconditional love of a mature father, a child learns that he or she is royalty. With this sort of blessing, a child approaches the various developmental tasks of adolescence and young adulthood with a greater sense of confidence and joy.

As a counselor, I regularly find myself in conversations with grown men and women who failed to secure their father’s blessing. In some cases, the blessing came with too many strings attached. In other cases, their fathers failed to receive an earlier blessing themselves. You can’t give what you haven’t received. A basic immaturity prevented them from passing a blessing along to their own children. In these families, an empty throne has been passed down from generation to generation.

The week before we left on our vacation, I discovered that my oldest children (at that time 14 and 11) had down-loaded a page form a website entitled, “Signs of Bad Parenting.” As I examined this document, I noticed that six of them had been highlighted. A lengthy and difficult conversation revealed that my children wanted me to take a hands off approach to parenting. They were looking for a dad who was a peer. After fruitlessly describing my parenting philosophy, I agreed to try their approach. When they asked if they could go out that Saturday night, I responded, “I don’t think it’s for me to respond to that question.” After three hours of living with another peer in the house, they both came to me and asked if we could return to the old way of doing business.

One way to bless a child, is to provide them affirmation and affection. Another important way to help them uncover their inner-royalty is to provide them with firm, predictable structure that defines the field of choices from which they can select life-giving alternatives. One important way to provide a father’s blessing is to give them structure that they can occasionally rage against as they seek to clarify their own values.