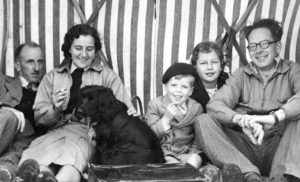 Before there was a Lizzie…before there were even the hints of John Harry or Annalise twinkles in my eyes…before I was befriended and then beguiled by Lisa, I used to carry a handy bumper-sticker of a phrase around with me.  I’d catch myself mouthing it when friends or colleagues would describe the thirty-one flavors of holiday trouble that can occur when families get together for Thanksgiving or Christmas.  It went something like this: “Families are nice places to visit, but I wouldn’t want to live in one.”

For the better part of my young adult years, I believed I would live out my days as a contented bachelor in either a quiet rectory, or a bachelor’s pad.  But, as the old saying goes, “Life is what happens when you’re busy making other plans.”  One day, you’re enjoying beer and sardines with your roommates watching late-night reruns of Star Trek:  The Next Generation; before you know it, you’re enjoying graham crackers and milk, watching “Phineus and Ferb,” with your eight-year-old buddy.

By the time Lisa and I tied the knot in 1994, I was enrolled in a doctoral program in Marriage and Family Therapy.  In those courses, I was learning all about the complexity of family structures.  In my program, we studied the fascinating interplay of individual and family development.  The degree hanging on my wall reminds me that the—courses-papers-dissertation-tests—part of my life is over.  Nonetheless, I can’t shake the feeling that I’m still enrolled in a Practicum that has no end.

I remember the verbal repartee at our dinner table several years ago.   I listened as my extroverted six-year-old compared and contrasted the locker-room similarities and differences between her thirteen-year-old sister’s body, and her mother’s physique…in excruciating detail.  Judging from her red face, and downcast eyes, it was not hard to imagine what my thirteen-year-old was thinking, “Families are a nice place to visit, but….”

As Lizzie’s sentences accumulated into paragraphs, I was hastily trying to formulate an intelligent fatherly response based upon the developmental ages and stages gathered around the table.  On the one hand, when Lizzie suddenly made my thirteen-year-old’s body the audio-visual of a Kindergarten anatomy course, I knew that something had to be done to re-establish respectful boundaries.   On the other hand, my six-year-old, along with the rest of the kids in my family, need to know that there is nothing shameful or embarrassing about our bodies. Lizzie was simply making intelligent observations.  In our family, observation-making is encouraged.

After nearly biting a hole in my lip to keep from laughing, I constructed a response that had something to do with how and why bodies change.  I went on to discuss the concept of privacy, and how “we need to give each other privacy even when we’re just talking about each other’s bodies.”

This Sunday’s Gospel passage (Luke 2: 41-52), described that famous scene in which Joseph and Mary discovered that Emmanuel, the savior of the human race, had gone missing for several days.  After locating the twelve-year-old Messiah, they let him know that they had been worried sick.  Jesus responded, “Why were you looking for me?  Did you not know that I had to be in my father’s house?” I have a feeling that I know what Joseph was thinking in that moment, “Holy Families are a nice place to visit, but….”

One of the reasons that families can be so challenging has to do with the characteristic ways that individuals within a family develop together.  The motivations, challenges, and requirements of one family member at a given point on his or her developmental journey frequently collide with those of another family member.

Jesus was twelve-years old in this story.  At twelve years of age, young boys and girls are attempting to exercise their signature gifts in the world.  Nurturing a child at this age and stage of development is to allow some room for these gifts to unfold.  That magical combination of (a) a child exercising his or her gifts, combined with (b) a holding environment welcoming those gifts, leads to (c) a young person’s development of a sense of identity.

In this Sunday’s Gospel passage, Jesus was behaving like a normal (as well as profoundly gifted) twelve year old.  He was simultaneously exercising his gifts, and working out his identity in the world.  The trajectory of Jesus’ developmental tasks bumped up against Joseph’s need to provide a safe environment for his boy.  To respond adequately to the needs of a person in this stage of development requires a mature parent, and a mature marital subsystem for the adolescent.  In response to Jesus’ Excellent Jerusalem Temple Adventure, parents who were no more emotionally developed than an adolescent themselves, could potentially turn on each other.  “What’s wrong with you!  Can’t you keep track of your son?!”  In such a holding environment, the child’s attention shifts from his own identity formation to anxiety about the marital subsystem in his family.

As you make your way through the Christmas Season in your holy family, you will experience people from all across the developmental landscape coming into contact with one another.  At times that contact will create friction.  Perhaps one takeaway from this week’s Sunday Gospel has to do with accepting that friction as a natural part of the unfolding of a family as it winds its way through that intricate process called “The Family Life Cycle.”  Another takeaway is an invitation to step back and ask yourself, how is this family, or this individual in this family asking me to take another step forward in my emotional and spiritual development?