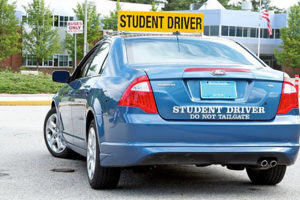 It is difficult to remember what a sophisticated set of skills is required for something so commonplace as driving, until one is placed in the passenger’s seat next to a fifteen-year-old driver-in-training. One night at dusk, six years ago, when Annalise was a driver-in-training, she and I pin-balled our way down the painted lines of our lane, first hugging the white stripes of the port side, then the yellow lines at starboard, I made a mental note—“Next time Annalise asks if she can practice driving, I will empty my bladder before leaving home.”

This was not Annalise’s first time behind the wheel. Her first foray into driving came while I was doing my duty on the sidelines of my son’s baseball games. Somewhere between the first and second innings of that afternoon’s double-header, my wife called to tell me that they were nearly ready to launch Annalise’s maiden voyage. Never one to be upstaged by someone else’s developmental milestone, Lizzie, my first grader, had decided to outfit herself in safety gear as befitted such an occasion. A crash helmet, shin guards, knee, and elbow pads, along with a rope tying herself into her car-seat, announced that she was ready for this adventure. In retrospect, it could have been that Lizzie had a premonition.

I was there for my eldest daughter’s first breath. My outstretched hands waited to catch her during her first foray into bipedal locomotion. I was there when her first tooth wiggled free. I held her steady as she tantrumed her way through her very first haircut. Unfortunately, I was not there for her maiden voyage behind the steering wheel. Had I been there, I would have taken her to the spacious parking lot out front of the vacant strip mall near our house where she could make every mistake in the book…risk-free. Like I said, instead, I was at a baseball game.

Third inning of the second game, two base runners on, my son was in the hole awaiting his turn to drive in the runners. That’s when I got the call. “Tom, we’re all okay, but Annalise got into an accident.” Several merciful innings, and a forty-five minute car ride home, gave me the opportunity to wash my mouth clean of the phrase ready to leap off the tip of my tongue, “You let her drive on our neighborhood’s narrow, winding roads the very first time out?! (Imagine that phrase uttered in a scolding, holier-than-thou tone, sure to preclude at least a month’s worth of connubial contact.). By God’s grace, the next words out of my mouth: “I’m just glad you’re all okay.”

In this Sunday’s first reading (Jonah 3: 1-5, 10), Jonah, who had freshly learned a thing or two about conversion, preached a message of change to the pagan city of Ninevah. According to that narrative, the whole town from Burgermeister to beggar, immediately repented of past misdeeds, and changed their ways. Similarly, in this Sunday’s Gospel selection (Mark 1: 14-20), when Jesus called his first four followers, they immediately, and radically changed their lives and followed him.

Every once-in-awhile I think it can happen that way: change comes after one invitation, or one request. But after more than a couple of decades of counseling, it seems to me that change occurs more in the manner of a new driver learning the skills of navigation. Like learning to drive, change takes time, effort, practice…and mistakes too.

Rather than allowing that first driver’s ed. mistake to paralyze her, when the time was right, my wife took Annalise to a parking lot, and started over again. By little and by little my daughter mastered a cluster of skills that she now takes for granted.

Many times in our relationships, we fail to appreciate the insight that informed my wife’s pedagogical method with my daughter. Many of us simply refuse to believe that repetition is the mother of all education. Instead, we tell a spouse, friend, or colleague of a change that we want, and then when it doesn’t show up in their behavior, we brokenheartedly assume that they are deaf to our pleas. To folks like this, I frequently ask, “How many times did you ask your son or daughter to say, “Please,” and “Thank you” before it became a habit? Maybe one hundred times? Two hundred times? Every day that I live, I become more convinced that adults are nothing more than kids in grown up clothes. To form a new habit, or to lose an old habit, takes many requests…many reminders. Like driver’s ed instruction, it takes repetition, a willingness to suffer through mistakes, sometimes with white knuckles, but more often with good humor, kindness, and encouragement when the loved one’s behavior comes close to approximating the requested change.

Likewise, a new skill, or a new behavior that has been requested by a loved one, can feel as awkward as simultaneously operating a break, gas pedal, steering wheel, and clutch for the very first time. Because the requested change feels awkward does not mean that it is time to give up on mastering it.