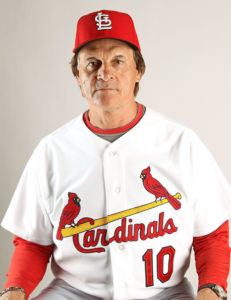 So I am going to simply admit it. I am a fair weathered baseball fan. I didn’t know I was a fair-weathered fan until last year when my Saint Louis Cardinals failed to make the playoffs. That no-show led to a full summer’s worth of my no-show in front of the television set, radio, or even a single baseball game.

It wasn’t always that way. Back in 2011, when (improbably) the Cardinals won the World Series, I could maintain the fiction that, when it came to baseball, the red blood that flowed from any any one of my accidental contusions or lacerations, bore that color due to my baseball team affiliation. Back then, I wasn’t alone. Basking in the afterglow of David Freeze’s heroics, and a Cinderella championship, even the most lackadaisical/casual Cardinal baseball viewer…the kind of person who thinks a “double play” is a two-for-one special at the Municipal Opera…even these kinds of non-fans were suddenly sports obsessed! Suddenly everyone in Saint Louis was either a cradle-Cardinal, or a born-again Fred-bird BFF. When you’re living in a town with a sports juggernaute like the 1996 through 2014 Cardinals, it is natural to dial into sports talk radio on the way to or from work.

It seems to me that heated debates about leadership style are not limited to the sports airwaves. In this time of polarized politics, so many people relish the hobby of handicapping and critiquing our leaders. Along the same lines, a favorite pastime in the workplace has always been the ongoing discussion about the merits, but mostly demerits of bosses and supervisors. Whether its sports, politics, the workplace, or even church, people love to analyze and criticize their leaders.

In this week’s Gospel (Matthew 23: 1-12) Jesus fixed his critical eye on a group of leaders. In a withering diatribe aimed at ineffective leadership, Jesus concluded his comments with the famous aphorism, “Whoever humbles himself will be exalted. Whoever exalts himself will be humbled.” This section of scripture was not meant just for the ears of those who hold elected or appointed offices of leadership. If you profess Christianity (or for that matter any authentic form of spirituality), then you are called to be a light shining in a world that can be pretty dark. You may be called to lead a crowd of one, or one hundred thousand. The point is, if you profess a relationship with an undying/indwelling inner-presence, then you are called to exercise real authority in this world.

This week’s scripture pointed out that real authority is grown in the soil of humility. This week, I would like to explore some attributes of a humble leader. I invite you to check yourself, (not Tony LaRussa, nor an elected official, a bishop, or a boss) against this inventory to see if your leadership reflects these attributes.

The opposite of humility is arrogance. The word, “arrogance” literally translated from the Latin root means the absence of questioning. A humble leader is not afraid to simply raise questions about the way things are. Those with a vested interest in the status quo might find a humble leader intolerable because he or she is not afraid to ask for the rationale behind a familiar old way of doing things. How often do you stop and ask, “Are we handling things the best way we can?” “Is there room for growth?”

Humble Leaders Are Willing to Be Questioned and Critiqued.

John F. Kennedy, with all of his shortcomings, was able to recognize that people generally do not tell one another (much less their boss) hard truths. After the worst decision of his Presidency (i.e. The Bay of Pigs Invasion), he appointed his brother, Bobby, to the Cabinet because he knew that his little brother would have no difficulty in questioning and critiquing his older brother and his ideas. Who in your life has permission to tell you the truth? How do you encourage feedback from others?

Humble Leaders Have a Sense of Humor

I once knew a nurse who served at the side of a surgeon who had humility issues. This Doctor Wunderkind would think nothing of cursing at a nurse assistant in a burst of stress-induced anger. On this particular day, Dr. Premadonna began his familiar wind up to a tantrum. His nurse responded, “Are you going to make me cry on my birthday?” Silence followed. A few minutes later, the chastened doctor said, “I didn’t know it was your birthday.” The nurse replied, “It’s not.” Laughter then filled the surgical suite. Through the use of intelligent humor, the employee became the leader of her boss, the surgeon. Are you able to have a good-humored laugh at yourself and the circumstances around you?

At the core of every Pharisee is a deeply fearful, insecure man or woman who has not yet owned up to his or her insecurities. It is almost a mathematical axiom: “Where you find the need for deference (i.e. titles, special treatment, etc…), there you find inner insecurity that has not been tamed.” Untamed insecurity nourishes the false self (i.e. egoism). Have you done your inner work through spiritual direction, counseling, or daily journaling to name and tame your insecurities?

Humble Leaders Ask Others to Follow the Truth (not them)

Thomas Aquinas, based upon his understanding of Aristotle, wrote that the authority of a law is based more upon the reasonableness of the law than on the authority of the law-giver. Leaders who say, “Do it because I said so,” generally do not inspire others. Real authority is based upon a fearless commitment to what is true, and therefore, reasonable. Real leaders do not ask others to follow them; they ask others to follow the truth. That means that real leaders point beyond themselves. In your leadership of children, or other adults, do you point to yourself as the authority, or beyond yourself to the truth? Are you willing to explain the reasons under your requests, and to acknowledge when they are flawed?

Humble Leaders Know What Grounds Them

The ancient root word from which the word, “humble” derives literally means, earth, or dirt. Real humility has everything to do with simply being down-to-earth. In the Christian Tradition, the master of “coming down to earth” found his home in the human heart. We hold a treasure in these earthen vessels of our humanity that is beyond measuring. This is the source of our authority that C.S. Lewis once said raises the head of the most lowly begger, and bends the knee of the most powerful king. Want more authority? How will you ground yourself this week in the One who is the source of all real authority?