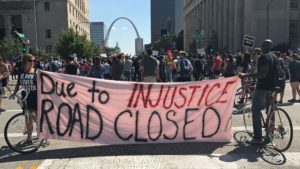 On the day after The Feast of the Triumph of the cross, Saint Louisans found themselves, once again, in the shadow of the cross.  Jason Stockley, a former police officer, was found innocent of First Degree Murder in the death of Anthony Lamar Smith, an African American.  Just like three years ago in Ferguson, Missouri, there were protests.  Once again, the world found a tiny peep hole through which our community, could be displayed in all of our sloppiness.  The great Twentieth Century theologian, Karl Rahner, said that if you want to see where salvation history intersects with human history, look for the cross.  We in Saint Louis seem to be camped out at the foot of it.

Unlike Socrates who took his death-penalty vile of hemlock and went to his demise philosophizing serenely with his students, Jesus death wore the smudge and smell of the humanity that he took up thirty-two years earlier.  He wept.  He begged for death to pass him by.  “My God, My God…” he screamed.  Out of all of this sloppiness, somehow resurrection came to pass, and an opening wide enough for all of us to pass through came with it.  Like childbirth, somehow the sloppiness of our suffering and humanity is the royal road to breakthroughs to new life.

For those of us who live a suburb or two removed from the protests in the city, it is hard to observe the daily results of centuries of racial injustice percolating, just below the surface.  Every-so-often, like the tip of an iceberg, something like Friday’s verdict surfaces, and along with it, the birth pangs of something that is trying desperately to be born.  For those who look through the tiny peep hole of the media, we see a first degree murder case that was decided in favor of a defendant, because the steep mountain of “beyond reasonable doubt” could not be submitted by a judge.

For those with eyes to see, there is the 85% of the iceberg that supports every manner of mischief in our community.  For those willing to widen their gaze, they see decades of racial steering that created ghettos of people unable to produce a tax base robust enough to fuel excellent education, leaving generations of people stuck in soul-disintegrating, family-splitting hopelessness.  Violence and crime endemic to these communities produce PTSD in many of the children inhibiting educational performance, and leading to the kinds of things that soldiers’ families report upon their return home (eg. depression, anxiety, panic attacks, increased aggression, domestic violence).  Neighborhoods like these don’t attract many businesses or even grocery stores.  A depressing self-feeding cycle sets in.  In the face of all of this, for those with eyes to see, in these same neighborhoods, tremendous generosity, neighborliness, and resilience also occur on a daily basis.

The unseen impact of the GI Bill allowed my dad to get a college education.  This, in turn, provided the opportunity for a middle class life including excellent education for my siblings and me.  Black soldiers of my father’s time were not provided this benefit.  The house I described that my dad purchased with a sweet post-war mortgage with favorable interest rates provided equity, which in turn, provided credit for my dad’s enterprenuerially genius to flower.  Such mortgages were unavailable to black families.    Even if they weren’t steered by realators away from neighborhoods like ours, the mortgages they were allowed to purchase were stingy and precarious.  These draconian mortgages often led to foreclosures.  Even when they did not result in a foreclosure, it was difficult with these agreements to build up substantial equity, like my dad did, to move your family into the middle class with all of the blessings of education, security, and self-esteem that came with it.  Even if someone wanted to leave neighbors and family behind to move to a safer place, it was impossible.

I have spoken with an executive in a large Saint Louis Health Care institution who describes the night he was forced to spread across a car as he was searched on his way to being arrested.  The police discontinued the arrest only when some white colleagues who happened to be walking by attested to his innocence.  I have spoken with black medical school students who describe regularly being stopped by security whenever they are walking unaccompanied by white colleagues on campus.  Every black person I have ever known has stories like this to tell, not from decades ago, but right here in the current time zone.  When a verdict is announced like the one announced on the day after the Triumph of the Cross, there is a decades and centuries old root system to the frustration, anger and sloppiness that surface into public view like the 15% of an iceberg.

If Carl Rahner was correct, that the in-breaking of salvation history is taking place where you find the cross, then Saint Louis this weekend is Calvary.  How can we participate in the inbreaking of the Kingdom in this place, to midwife an inbreaking of new life?  One way to midwife the Kingdom would be to insist upon a wide angle lens view of the situation unfolding in Saint Louis City. Keeping the context of history as the frame around the events unfolding in Saint Louis, regardless of how sloppy they unfold is to keep hold of one’s compassion.  The surest heuristic principle to guide the interpretation of scripture, tradition, and moral questioning is that of compassion.

Another way to midwife the Kingdom is to resolutely exercise compassion in a non-dualistic way.  Black lives matter.  Police officers lives matter.  It is true that a police officer can quit his job, but a black man cannot shed his race, and so these issues are not symmetrical.  But it is also true to say that we live in a world that requires good, caring and ethical police to ensure that justice prevails in our neighborhoods and streets.  And given the historical context of racial injustice in our community, it is not hard to resonate with the African American Dallas Police Chief Brown, “We are asking our cops to do too much.” Anything we can do to address long-standing issues of racial injustice, and reach across the racial divide with more than just a handshake, is a support to black people whose lives are far too frequently on the line, as well as the police who put their lives on the line.  Saint Louisans, in our prayerful actions, and our refusal to skim over the surface of things, let’s resolutely trace a pathway from Calvary to the Triumph of the Cross.