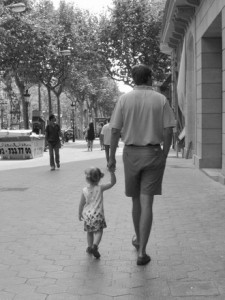 You will notice that this week’s article looks a lot like last week’s article. Due to some unforeseen computer issues, I was not able to access what I had written for this week. As a result, last week’s reflection on fatherhood is now this week’s reflection on fatherhood. I did append a small essay on the elements that make an effective apology. I hope you find it helpful. Thanks for your patience. See you next week.

Eventually the storms subsided as Lizzie and I drowned our sorrows over coffee cake at our favorite diner. Together, we reviewed the game tape of our conflict. We settled upon the appropriate consequences and amends. When we arrived home, I discussed what had happened with my two older kids, and apologized for my King Triton behavior. Having gotten Lizzie down for her nap, I sat at my word processor to write an article for the upcoming Sunday.

Staring at my blank computer screen, it occurred to me that the upcoming Sunday that year, was Father’s Day. Given my performance that morning, I felt like calling in a guest author. Fresh off of a less than stellar dad day, I didn’t feel like I had the bona fides to write a reflection on fatherhood. That’s when I cracked open my Bible, and read the first reading for this Sunday (2 Samuel 12: 7-10, 13) and read about a flawed king who was sorry for his failings.

Mercifully, perfection is also not the pre-requisite for Christian fatherhood. Based upon this Sunday’s readings, (Both 2 Samuel 12, and Luke 7: 36- Ch. 8), it would seem that a man’s ability to own up to his flaws is an essential characteristic of Christian leadership…including fatherhood.

Elements of a Proper Apology

1. It must be specific (eg.”I’m sorry for the time I missed your recital.” NOT: “I’m sorry for anything I ever did to hurt your feelings.”).

2. Include the impact you think it had on the apology recipient:

(e.g. “I’m sorry I missed your recital. If it was me, I would wonder if my dad really cared about my music. I think it would hurt my feelings”).

3. Voice your firm intention to avoid this mistake in the future. (e.g. “I’m sorry I missed your recital. You must have felt like I didn’t care about your music. I do care, and so I promise that I will do my very best in the future to make your recitals.).

4. Very Important: Avoid spending much time at all explaining why you made the mistake. However well intentioned you are in voicing your explanation it will come off as minimizing your mistake.

5. If your mistake rises to a high enough level of harm to the recipient, make amends. An “amends” is when you do something that requires self-sacrifice that shows your sorrow and your firm intention of avoiding this mistake in the future. The best cinematic example of this can be found in Robert DeNiro’s role of Rodrigo Mendoza in the 1986 movie, “The Mission.” If the amends can rectify the mistake, all the better. But if the mistake can’t be fixed, at least the amends shows the person hurt by your mistake that you take your apology seriously.