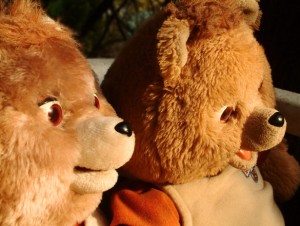 If there were such a thing as DNA testing to determine the paternity of a stuffed animal, I am sure that my brother Phil’s chromosomes would perfectly match those contained within the fibrous sinews of my best friend, Squiddy.  Squiddy was not your typical, run of the mill, teddy-bear-like transitional object.  For starters, he was not a bear, and despite his name, he was not originally a squid either.  And it is entirely possible that he was not even originally a “he.”  Squiddy started out his life as a ridiculous looking octopus with a red hat, and an effeminate mouth that looked as if lipstick had been applied.  From the moment I released him from his wrapping paper/cardboard prison, my discerning five-year-old eye could tell that the process of Squiddy’s liberation was only just beginning.

Squiddy’s entry into my life began with my brother Phil’s Fifth Grade career in oceanography that lasted about as long as Johnny Paper’s relationship with Puff the Magic Dragon.  But back before his retirement from the watery world occupied by Jacques Cousteau and the denizens of the deep, Phil was obsessed with all things oceanic.  And since Phil was my personal American idol, I too became a junior oceanographer.

Time/Life, and National Geographic would feed my brother’s obsession with a monthly supply of books and magazines featuring pictures of foreboding creatures with sharp teeth, and luminous eyes.  But out of all of the pictures in all of those books, one picture firmly set a hook in my little boy imagination.  “No one has actually ever seen or photographed one of these,” my brother explained as he directed my attention to an artist’s rendering.  “Only the damage done to deep-sea diving Sperm Whales proves that giant squids actually exist.”

Out from the slick pages of one of his books stared an angry-eyed titanic creature that had wrapped its punishing tentacles around a hapless Sperm Whale.  Just at that moment, the squid was in the process of cracking the whale like a Brazil nut, and feeding off of its sorry remains.  If Tyrannosaurus Rexes could swim, this creature would have eaten them like popcorn.

After laying my five-year-old eyes on that gangly behemoth, it was all-squids-all-of-the-time for me.  In the early 1960’s the stuffed animal kingdom was not known for its biodiversity.  My aunt did her level best to locate a fuzzy stuffed squid.  The furry, effete cephalopoda octopoda vulgarus staring up at me from its newly torn open box was as close as she could get.  Within a day, I had ripped off its silly hat, and lips.  I assigned the creature a surname, a new genus and species, and potentially, a new gender.  Just like that, my best friend was also the most powerful creature on earth (or under the water).  And needless-to-say, being friends with the most powerful creature on earth had its advantages for a five-year-old boy who was scared of the dark.

Sigmund Freud, the most famous atheist of the Twentieth Century, maintained that God was nothing more than a sophisticated version of my childhood friend, Squiddy.  He asserted that when human beings are scared of the dark, (Here substitute the words, “death,” or “illness,” or any other calamity you wish.), they cling to the concept of God the way a child clings to a transitional object like a Teddy Bear, or a blankie (or a squid that resembles an octopus).  One of the products of his psychoanalytic treatment was to free people from the bonds of their childish theism.

The problem I have with Freud’s critique of religion is the same problem I have encountered with some other atheists or agnostics.  They equate theistic faith with childish images that never matured along with adult intellectual or emotional development.  The God they reject is the bearded old man that people conceive of as children.  Having never invested in intellectual or affective encounters with God, beyond their grade school years, belief is regarded as one of many quaint objects from childhood to be boxed up and shelved.  Rather than dialoguing with the God of Dorothy Day, Martin Luther King Junior, Abraham Heschel, Reinhold Niebuhr, or Martin  Buber, they direct their critiques to the comforting, but harmless god introduced by their third grade catechist.

This Sunday’s Gospel passage (John 10: 27-30) presented an image of God that is form-fitted to the imagination of a five-year-old.  Catechists tell us that the “Good Shepherd” passage is perhaps the best starting place possible to help a pre-schooler grasp the Christian understanding of Jesus’ relationship with us.  But a second look at this brief passage reveals a picture that will not fit neatly within the gauzy frame of kitschy childhood religious art.

In addition to providing care and comfort, shepherds also make profound demands of their charges. Shepherds periodically require sheep to surrender wool and milk.  A shepherd often takes sheep places they would never choose to go on their own.  Faith in God not only comforts the afflicted, at least as often, God afflicts the comfortable.  This week, perhaps you could allow the scriptures to challenge you with a couple of questions.  Does your faith stretch you?  Do you allow your encounters with the Good Shepherd to make demands upon your relationships with your family, your work, your enemies, the poor, the different, the environment, or yourself?