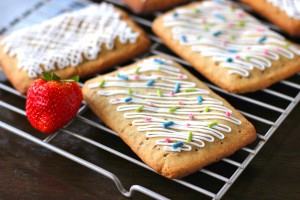 Anyone who grew up in a large family knows what it is like to live on a limited snack-food budget.  When I was a child, I imagined that my mom had a snack food rating scale that she carried with her to the grocery store.  She would consult that scale as a discernment aid in selecting which snacks would accompany her to our kitchen pantry.  I suspected that it was a simple “1” to “10” rating system.  Those snacks that no one but dad could eat would be rated a “1” (e.g. sardines, various pickles, etc…).  A “10” would be reserved for those rare, but serious snacks made possible by recent advances in chemistry:  “Twinkies,” “Ho Ho’s,” “Ding Dongs,” and “Suzie Q’s.”

But there was one snack that was so delicious…so amazingly special, that it required the scale to be extended well beyond the ten point range to an “11,” or maybe even a  “12.”  It was that glorious combination of jelly,  pastry, and frosting known as the “Pop Tart!”  My brothers and sisters and I were convinced that if Jesus would have become incarnate in the Twentieth Century, He would have overlooked plain old bread, and selected the PopTart as his vehicle for transubstantiation.  We knew with certitude that when we died, the first meal served to us in heaven would feature Pop Tarts as the main course.

My mom learned the hard way to avoid bringing home any snack food item that occupied the territory rated at a “7” or above on her snack food rating scale…especially Pop Tarts.  Anyone who has been to an oceanfront beach has seen what happens when an unsuspecting child throws a tiny morsel of food to a lurking seagull.  Immediately two hundred of the gull’s most intimate friends descend on the bewildered child with rapacious beaks, claws and feathers.  After experiencing this Alfred Hitchcock-like moment, the child learns to never so much as offer a single “Cheetoh” to another bird.  After experiencing a couple Pop-Tart induced feeding frenzies, my mom avoided bringing home anymore of these coveted snacks to her own brood of seven sea gulls.

In this Sunday’s Gospel, (Luke 24: 35-48) the disciples were fearfully gathered one more time in an upper room.  Without asking for it, without looking for it, the laws of nature were bent.  The resurrected Christ appeared in their midst.  For a time, the disciples had difficulty believing that this could be real.  And yet, here was he was.

During the Easter season, Christians acknowledge the magic that is knit into the fabric of our post-resurrection world.  Despite all the slings and arrows that are part and parcel of our human existence, for those with eyes to see, Easter grace has a way of subtly appearing when we least expect it.  Around every corner the resurrected Lord is attempting to hand us an unexpected experience of Easter grace.

This Easter Season is a time to break ranks with these colleagues.  Now is the time to develop those Easter disciplines of noticing the myriad moments when the resurrected Christ arrives with a special grace wrapped up for you if you will take the opportunity to stop, dropeverything, and for one shining moment…to savor.