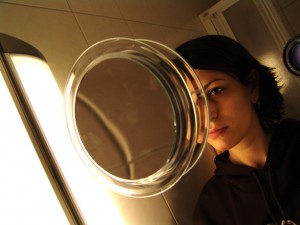 I can distinctly remember one sunny morning several years ago when I dropped Lizzie off at kindergarten. I noticed that one of her classmate’s dads was sporting a tattoo on his neck. I’d be hard pressed to say precisely how, but it seemed to me that it had a kind of vaguely Asian flare to it. When I was a kid, body art like that branded a man as a Navy alum, or maybe a biker dude. In those days, such a marking would indicate that this was someone not to be messed with. Its wearer would be far stockier than the lithe, hip dad who kissed his girl goodbye, making sure she hadn’t forgotten her lunch. As she scurried off, he joined a small group of similarly hip moms and dads for a little young-adult-parent (YAP) banter. As they politely flashed me a group smile, I observed that there was no salt in any of their peppery YAP hair. Nor were any of the YAP men sporting a dunlap (i.e. a middle-aged belly that “done lapped” over its owner’s belt). In that moment, it occurred to me, that to these YAPs, I was old, gray David Letterman bringing his kid to school—just not as funny… or as rich. In the last several years, I have been having more and more moments like this one. Three nights ago at midnight, the last few grains of sand dropped through the neck of the hourglass marking another year of my life in the history books. I have fully crossed over the threshold of antiquity, and am smack in the middle of the “youth of my old age” (or is that the “old age of my youth?”). This inevitable passage of time has been far more difficult than I would have expected. Something about passing the chronological mile marker of fifty has elevated the stature of my inner critic.

At the ripe old age of ten, I first became aware of the presence of a harsh inner-critic. The “inner critic” is an amalgam of all the significant negative voices of a person’s life that have been internalized over the years. One Fourth-Grade day, while brushing my teeth, I took notice of a gripping, anxious feeling in my gut. When I stopped to pay attention, I became aware that I was berating myself for something embarrassing that I had said when I was five-years-old. Even then, this struck me as curious. Even then, the nascent cognitive counselor in me was aware of the dysfunctional nature of such self-talk. But as graduate school, and two decades of practice would reveal, knowledge of one’s dysfunction alone, rarely does anything to reduce it. As the pages have been inexorably stripped, one-by-one, from the calendar, I have been noticing that my inner-critic remains robust, and ageless.

In my psyche’s board-room, where the constituative parts of myself jockey for position, I am noticing how moments of stress tend to elevate my inner-critic’s status. Some triggering event will conjure him up, and he will take control of the microphone that is my consciousness. I noticed that when I turned fifty, the themes of my inner-critic’s soliloquies revolved more and more around measuring myself against someone else’s accomplishments. In excruciating detail all of the past goals that had yet to be fulfilled paraded themselves in front of my mind…over and over again. The inner-critic’s argumentation is always more hypnotic than sophisticated, but I have found the allure of this nettlesome inner-voice hard to resist.

This Sunday’s letter from Paul (taken from 1 Corinthians 13) challenged the reader to “put aside childish things.” In that famous passage, Paul invited the mature spiritually committed person to quit “thinking as a child,” “reasoning as a child,” and “talking like a child.” Maturity, according to this thinking, has to do with a life that is grounded in love. And that love, among other things, is patient, and kind, and forgiving. As I continue the sojourn that is my life, I am learning that this love is not only meant to be poured out for others, but we are to treat ourselves with patience, kindness, self-forgiveness, and yes…love.

In this famous passage, I am hearing Paul inviting you and me into a form of sacred cognitive therapy. We are to listen to our self-talk, revealed in how we speak to ourselves in the privacy of our ongoing internal dialogue, and how we speak to others. We can detect the childish voice of the inner-critic when we catch ourselves saying unkind, impatient, or unforgiving things about ourselves. This work is so important, in part, because the way we treat ourselves will tend to bleed over into how we treat those who are closest to us.

It used to be that I would only become aware of my childish inner critic through the emotional footprints that would be left behind: sadness, negativity, anxiety. Lately, through a process of self-reflection, I am attempting to catch myself in the act of negative self-talk. In such moments, I try to talk back to that voice, and to engage in a little corrective self-nurturing.

If the past is any kind of prelude to the future, then I suspect that this work of becoming more loving to self and others will be completed about a half an hour after I’m dead. In the meantime, let’s challenge and support one another in this sacred work to see ourselves more distinctly. Know that as you attempt to live out a discipline of rigorous self-compassion, that you are drawing on a deeper ancient power that predated any wound or any negative voice that you may have internalized.