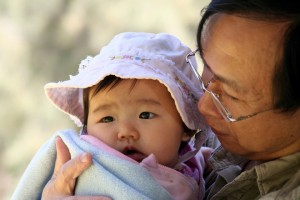 I don’t mean to brag, but I am a pretty descent housewife.  I wasn’t always.  My career as a domestic administrator began almost ten years ago when Lisa, my wife, was due to begin her medical residency.  In those days, a physician-in-training would often take in house call every fourth night.  On one of these nights, a resident would consider herself lucky to get three hours of sleep.  After working this thirty-six hour shift, Lisa would come home and flop into bed.  The next morning, she would wake up, drink stout coffee, and begin her usual twelve-hour work-day at the hospital.  Three days later, she would repeat this cycle by taking another turn on in-house call.

At the time, our oldest daughter, Annalise, was three years old, and John Harry, our second born, was a roly-poly nine-month old.  The expense of daycare, and the things that I had learned in graduate school about Attachment Theory led us to the conclusion that I should prune back my career to get these little humans off to a good start.

The next thing you know, I had traded in my briefcase for a backpack.  At our library’s story hour, in swimming classes, at the playground, and at the dreaded crafts table, I was the lone male bobbing conspicuously in a sea of estrogen.  Having lived the life of a housewife with small children has convinced me, that in purgatory, they are constantly doing children’s crafts.

Without my Filipino-American wife present, inquisitive mothers would often peer pensively at my Asian looking children.  As if we were talking about an attractive handbag, or pair of new shoes, it was not unusual for a mom to ask me, “Which country did you adopt your children from?”  This happened often enough that I began to practice different stories.  My favorite one had something to do with a fictitious tour of duty in Vietnam.  These brief forays into fictional story-telling never earned me a seat of honor in the circle of local mothers, but they did pass the time.

I have worked at many jobs in my life.  I was a grounds keeper for the Illinois State Capitol.  I drove a coffee delivery truck.  I sold women’s shoes, men’s shoes, boy’s shoes, and girl’s shoes.  I have bagged groceries, and flipped hamburgers.  I provided maintenance for a hotel and a grade school.  I have landscaped, mowed lawns, pumped gas, and waited tables.  I have counseled drug addicted, law-breaking adolescents.  I have managed volunteers, and employees.  I have constructed and directed retreats, and trainings in many places.  I was a door-to-door evangelizer for one summer.  I have counseled, thousands of people by now.  By far, the hardest job I have ever done was being a housewife.

It wasn’t the mastery of the eclectic array of skills that I found especially difficult.  It was the day-in-day-out lack of measurable productivity that I found hard.  Many days I remember looking around a disheveled house and asking myself, “What did I do all day?”  I remembered a wise old spiritual director who once told me that until someone has passed the fifty-year-old mile marker, they probably should steer clear of being a spiritual director.  He believed that until a spiritual director had reached the threshold of fifty years, the youthful need for productivity would rob the director of the necessary patience it takes to appreciate the quiet, subtle, patient movements of God’s grace.

This last Sunday’s Gospel told the story of Jesus’ temptation in the wilderness (Luke 4: 1-13).  In this account, Satan kept asking him to provide measurable demonstrations of his power.  Jesus resisted these temptations to measure out his mission by the yardsticks of this world.  Rather, he remained in the desert in immeasurable intimacy with God.

In my career as a housewife, I have found it difficult to imitate Christ in this regard.  My temptation is to give myself over to what is measurable, while forsaking the important work, which is not.  I have discovered that it is easy to obsess over keeping the house clean, and the meals flashy.  A clean bathroom or kitchen can be measured.  When people bite into one of my culinary creations they say complimentary things.  But the really important work has little to do with productivity.  Wasting time with a child, or with my wife is not productive in any measurable way.  But for a spiritually invested husband and father, there is nothing more important than setting aside my agenda and hanging out with my kids or wife.
Here at the outset of Lent, could you consider choosing a spiritual exercise that is in keeping with this Sunday’s Gospel?  Can you select something that helps you to wrestle with the notion that a clean room is not a pre-requisite for God’s love?  Can you enter into this season with a firm resolve to waste time with a God who is like a really good mom or dad who doesn’t care if things are a little out of place?  Will you allow yourself to embrace the truly shocking notion that God’s love for you is immeasurable?