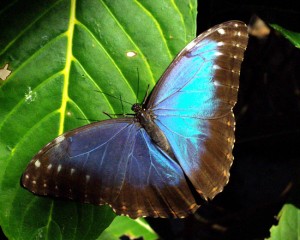 At eighteen months old, my daughter had decided that it was time to reclaim her birthright lost by Adam and Eve on that ancient fateful day in the Garden of Eden. At our secluded tent camping site in northern Michigan, Annalise freed herself from the unnatural confines of be-diapered living to commune with nature as God had intended before the stain of original sin. As my wife and I attended to the hundred chores that come with tent camping, our miniature Lady Godiva reconnoitered our little campsite to locate toddler objects of interest.

Her search uncovered a butterfly that promptly invited her to a Mid-summer’s morning romp. The two of them were kindred spirits. Unencumbered by the weight of object permanence, both of their intellects would flit between interest and disinterest in one another. As a wild flower, or a leaf entered either one of their fields of vision, one and then the other would briefly lose awareness of their companion. As the momentarily forgotten orange/black winged playmate floated back into view (and hence into consciousness), Annalise would make a toddler’s version of a dash toward her insect-friend. The closer my daughter’s hand came to grasping her colorful quarry, the further away the arcs of gossamer color would fade. Whenever Annalise contented herself with some nearer object of interest, the butterfly would gradually meander closer.

A few years ago, I learned that I have a lot in common with the toddler version of my daughter. After five years of conducting my marital renewal program, my wife and I agreed to experience the program as participants. In the course of completing the self-reflective, take home exercises, an unmistakable connect-the-dots pattern began to emerge. Over the years, my wife would periodically surface a particular area in our relationship where I could grow in my ability to respond to her needs. Like a butterfly-chasing toddler with a limited span of attention, I would focus upon her request for a period of time, and then it was as if her stated need would float out of my mind again. Like a butterfly camouflaged within summer foliage, I would lose sight of her request. This pattern that mimicked a small child’s lack of object permanence limited the joy that our marriage was meant to give both of us.

This Sunday’s Gospel passage (John 20: 19-30) represented one of five resurrection episodes found in John’s Gospel alone. It was as if the author understood the limited attention span of the audience of believers. The way chapters Twenty, and Twenty-one of John’s Gospel unfolded, it was as if the disciples were taken by surprise each and every time they discovered, yet again, that the Jesus had risen. Perhaps it was not so much that Thomas or the rest were doubting. It may be more that the concept of resurrected living was a lot for a human heart and mind to absorb. In reading these five accounts back-to-back, it was as if the disciples had to have Jesus’ resurrection etched into their minds and hearts over and over again the way a toddler has to learn through repetition…the way our Baptismal covenant is reinforced each and every time we receive the Eucharist.

Lent is normally associated with various ascetical practices aimed at conversion. Easter is normally associated with joy. For many of us though, if the gossamer gift of joy is to float closer to us, then we will need to create a better landing pad for it in our lives. Some process of ongoing conversion will be necessary to receive a further sharing of the gift of Easter joy.

Through the fifty days of Easter, what are some Easter disciplines that you can employ to provide a structure for more Easter joy to land in your life? Several years ago, Lisa and I lined up a marriage counselor who helped us create a structure that has allowed us to respond more effectively to one another’s requests. I know a couple whose Easter discipline will involve a once-a-week date night where the kids will be dropped off at a relative’s home. With the house to themselves, this couple hopes to catch a renewed glimpse of a marital intimacy that had been lost in the forest of chores, work, and parental responsibilities. I know a man who has asked a friend to serve as his personal trainer, so that he can hold himself accountable for several sessions of exercise a week. I know a woman who has decided, that in addition to the Sunday Eucharist, she will attend at least one or two other Masses per week. I know a man who has determined the half-way point between work and home. When he reaches this landmark, he will recite a prayer to empty his mind of workplace concerns to focus on the opportunities for fulfillment and joy that await him throughout the rest of his day.

What is a specific, intentional practice you could fold into these weeks before Pentecost that could keep you focused, and open you to a fuller sharing of Easter joy?