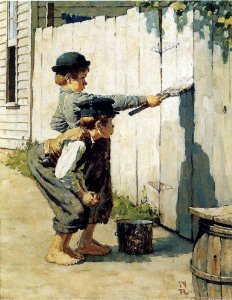 Many years ago, my daughter’s Fourth Grade class teamed up with the Fifth Graders to put on a play.  A selection of skits was cobbled together from the book, “Tom Sawyer.”  In this current age of weird creatures like “Sponge Bob Square Pants,” and “Pok’emon,” there was something comforting about watching children curing warts with stump water in a grave yard and hearing little voices say, “It was Injun Joe! He done it!”  Listening to children reciting the same lines that you recited (and maybe your own grandparents recited) is like eating a bowl of your mom’s steaming oatmeal on a cold winter’s morning.  It just feels warm going down.

While Annalise was earning her chops as a child actress, my first grader was practicing the sweet science of basketball under the tutelage of his dad’s humble coaching skills.  My ten little first grade guys produced their own unique brand of March Madness in January, February, and yes, March too.  At one point in the season, little Louie Lambrost took a break from his dribbling and passing drills to explain to me that “Lambrosts don’t follow rules.”  I think this explanation was designed to let me know, that while other boys might be susceptible to a coach’s influence, his DNA would not permit it.  Grateful for the “heads up,” I took this comment in stride until I overheard his father reciting this same line to my son in another coaching context.  I walked away with a vague queasiness in my gut.

That same feeling showed up while watching my daughter’s class performance.  During the most familiar part of the play, Tom Sawyer had hoodwinked practically all of the children in his village.  Through the art of some clever salesmanship, he wiggled out of a hot and boring day of whitewashing his surrogate mother’s fence and received a reward for whitewashing the truth:  a rare, juicy sweet apple.  The scene ended with one of my daughter’s classmates (who played Tom Sawyer) crunching into his swindled prize and giving the audience a knowing wink.  As my daughter’s handsome little classmate did his best Brad Pitt imitation in “Ocean’s Eleven,” I caught myself subconsciously scribbling a worried little father’s note to self, “teach your daughter to exercise caution around slick and charming boys like this.”  I felt that same inexpressible queasiness.

As I pondered my fuddy-duddy reactions to Twain’s classic fence scene, it occurred to me why I was so uncomfortable with the Lambrost family anarchistic pledge (i.e. “We don’t follow rules.”).   Rules do matter.  Children need the firm structure that rules provide.  Marriages work best when hidden expectations (a type of rule) are made crystal clear.  Families and organizations thrive when expectations and their subsequent consequences are explicitly articulated and consistently followed.

The first reading in Christian churches this Sunday was the classic Ten Commandments reading from Exodus (20: 1-17).  It provided a great opportunity to reflect upon the importance of rules.  Did you notice the prelude?  “I the Lord am your God.”  In Exodus and Deuteronomy, whenever that line appears just before an enumeration of laws, the reader is supposed to hear, “Since you are my people, and I am your God, try to do what you see me doing.”  In this case, what you see God doing is being really clear about expectations.  Do you behave like God in this way, or are you more like my little first grade anarchist, Louie and his dad?

One challenging implication of this reading is that we ought to imitate God by being as clear about our expectations as possible.  By knowing the rules for which we stand, we help our spouses, children, community members, and colleagues know how to relate to us.

For our young children, the firm structure of rules provides their little concrete, self-interested souls a bridge from ego-centrism to concerns beyond themselves.  For an adolescent, clarity of expectations gives them a firm backboard against which they can bounce their emerging discoveries of who they are.  Our firmness gives them a safe structure for their emerging autonomy to blossom.  For a spouse, community member, or friend, making covert expectations overt provides the raw materials for adult relationships.  It sets the stage for dialogue that may eventually lead to negotiations, compromise, course corrections, and perhaps even the self-sacrifice of a realization that an expectation was unrealistic.

When we are clear about the rules and their consequences, we are imitating the One who is love itself.  Paradoxically we provide one another with an important prerequisite for real freedom.

What are the rules and guidelines that provide life-giving structure to your decisions?  In one of his best-sellers, author and food journalist, Michael Polin, encouraged his readers to articulate the unspoken rules that guide their food choices.  One of the rules Polin uses to shape his nutritional choices:  “Shop primarily around the perimeter of the grocery store.”  In this way he avoids processed food, and comes home with mostly produce, meat, and dairy products.

Early in his career, Billy Graham, a handsome, charismatic, married man was noticing how much female attention he was receiving, and how much he enjoyed it.  Even at that young age, Graham knew the inherent fickleness of his human nature.  In his early marriage, Graham articulated a rule for himself, “Never be alone with a woman who isn’t my wife.”  Many televangelists have strayed, but armed with this personal guideline, Graham’s marriage has stood the test of time.

When I asked my grandma what led to the success of her marriage of 55 years, she said, “I always lived by this rule, ‘never let even a tiny little thing come in between me and my husband.’”

What are the rules (spoken and unspoken) that guide your daily decisions?

Directions:  Take some time with a friend, or family member, and have a conversation about your personal rules.  Try to articulate the guidelines that you try to live by.  They could be as everyday and simple as, “Always put your tools back where you got em.”  They could be as profound as, “Never let the sun go down on your anger.”  You might also see if you can remember where you got your personal little “Rules to Live by.”   Did you inherit it from a beloved family member?  Did you learn it in a classroom, or church pew?  See if you can locate any rules you have been living out unconsciously, and put words to them.

Here is a small sampling of rules to help prime the pump.