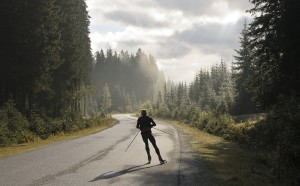 In the waning days of my high school career, my father’s alcoholism was in full flower. My parent’s marriage was flying apart at the seams. Adult attention was in short supply. God’s grace blew Jim and Sue into my life to fill the role of ad hoc God parents. Together they led a weekly bible study for teenagers. Their solid example of chaos free living, and whole hearted devotion provided me with the spiritual calcium required for the proper formation of a newly forming skeletal structure of adult faith.

Time and the quotidian demands of life have a way of putting distance between people. It had been a good decade since I had seen Jim or Sue. When I heard that three of their daughters would be attending the same Family Camp as my crew, I wondered if I would cross paths with Jim and Sue again. My answer arrived on the first day of camp.

After the adult session (The children of camp were attending their own sessions led by a staff of college volunteers), Jim and Sue arrived as guests. I quickly welcomed them into our small discussion group. As they walked over, I noticed that Sue appeared to be half walking and half dragging a leg behind her. As they settled into our conversation, I also observed that Sue’s face appeared distorted and expressionless.

When it came their time to share, Sue described the challenges she faced in living with Parkinson’s Disease. When I first met her in 1977, she had just buried her father who suffered through a long and horrific battle with Parkinson’s. Finding out that this disease had circled back around to find her, after having taken her father away thirty years ago, was a stout challenge to her spiritual and emotional equilibrium. I was about to learn that the things Sue taught me three decades ago made her more than ready for the current task.

Not much has ever gotten past Sue’s perceptive abilities. “The main challenge these days is that I notice people’s reactions as they discover that my face twitches and stays frozen expressionless.” She continued. “As I get tired in the afternoon, my hands get tremors, and my arms move involuntarily. People get uncomfortable when they see me.” “My challenge is to accept their reactions, and to stay rooted in peace until they get used to my appearance and can begin feeling comfortable.”

This Sunday’s Gospel selection was Luke’s description of Jesus’ Transfiguration (9: 28b-36). The events of that story are well known. Jesus’ appearance was changed, and a handful of his disciples came to a greater understanding of who he really was.

I sat listening in awe to this woman whose spiritual root system was well fed and watered. Like a little boy scrawling a mustache on a picture in a National Geographic magazine, Parkinson’s Disease had distorted Sue’s external appearance. But as I listened, like the disciples in this Sunday’s Gospel, I was transported beyond the shadows of her outer appearance to an inner mountaintop experience of my own. In an instant, I saw Sue as she appeared almost thirty years ago with a full spectrum of facial expressions, and energy to give to almost any project. I remembered the things we would talk about as we attempted to gain a deeper understanding into this spiritual life we had both embraced.

As I looked at this seventy-year-old woman sitting next to me, I saw something shining out of that visage that was graceful, elegant, and strong. Sue was navigating the steep hills of Parkinson’s Disease with profound humility, good humor, generous hospitality, and a fierce determination. For seventy years she had been in training for this. Little-by-little over the years, Sue’s soul had been transfigured by a daily training regimen that included contemplative prayer, meditation, spiritual community, the Eucharist, and loving service. Like Jesus during His transfiguration, Sue’s appearance has changed in such a way as to emphasize more clearly the enormity of what has grown in her soul over the years. Her energy to direct retreats, lead pilgrims to the Holy Land, give talks, and write articles is waning. Simultaneously, the quiet witness of how she and her family live out the Gospel in the midst of her disease process is a profound ministry for those with eyes to see it.

On this, the Second Sunday of Lent, can you take stock of your training regimen? You and I are being transfigured a little at a time by the daily choices we make, and the way that we are living our lives today. Based upon how you are living your life today, what will your soul look like when you arrive at the challenges that life will one day place before you?