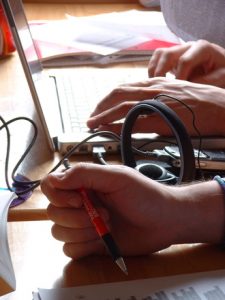 The auditorium of my son’s high school was nearly packed to full capacity in anticipation of the panel of guest speakers brought in from a handful of prestigious universities.  Their purpose was to provide a morning’s tutorial in and around the topic of “How to Get Your High School Kid into Her/His College of Choice.”  As the event launched, the speakers’ collective style appeared to be two parts erudition to one-part humor.  Despite the fact that they were from disparate parts of the country, in no way was this their first rodeo together.  These admissions officers had obviously shared a stage many times.  They addressed each other by first name, and seemed to riff off of each other’s jokes with the kind of practiced spontaneity of Johnny Carson and Ed McMahon (or Jimmy Fallon and Steve Higgins?).

By-and-by the topic turned to the “How to Write a College Admissions Essay” portion of the presentation.  Helpful hints included:  (1) Unlike the soap box derby in Cub Scouts, writing an admissions essay for your child is frowned upon (and just like Cub Scouts, it will be obvious if you break this rule); (2) Don’t make stuff up; (3) Don’t use clichés because we’ve heard the same ones thousands of times.  With that final admonition, all of the experts on stage nodded when the representative from a highly regarded Catholic University said, “If I get another essay from a Catholic high school that says, “I thought I was going to my service project to serve (the poor, or the children, or the sick, etc…), but little did I know, that I was the one who would be served…”  “If I hear that one more time,” the admissions director joked, “I’m going to gouge my own eyes out.”  Everyone in the crowd laughed.  I laughed too, but somewhere in the boardroom of my psyche, I could sense a part of me that was not proud of my laughter.  In the spiritual life, I have learned that a sense of being ill at ease is normally an invitation to stop, drop, and reflect.  Here’s what turned up.

At sixteen years old, I knew that Katie Mott was a stretch for me, but I couldn’t help myself.  I should have known better.  For one thing she was pretty enough to be dating the best and most handsome player on our soccer team.  For another thing, puberty had not bestowed upon me the kinds of gifts that other boys my age were enjoying.  For example, where they were pruning a fresh crop of facial hair, I was harvesting zits.  Nonetheless, I was smitten, and so like a cracking voiced Cyrano De Bergerac, little-by-little, I was able to worm my way into a kind of kissing cousins relationship with her.  Phone conversations would stretch into the night in which she progressively offered up more and more tantalizing dissatisfactions with her current relationship.  Like a fed stray dog, she was giving me just enough to hang around.  Things seemed to be moving in the right direction when I got the heartbreaking news that Katie Mott’s dad had taken a job in Sioux City, Iowa.  She would be leaving in no more than three weeks!  What I had thought was a marathon, had suddenly turned into a sprint.  It was time to abandon my patient Cyrano de Bergerac ways for something more Rambo-like.

I examined my savings account, I discovered just enough funding for a bouquet of flowers to send with a love letter.  It worked!  A week later, I had lined up a real live date with her that coincided with a newly minted driver’s license, and the use of my sister’s car.  What ensued was a charming G-rated version of The Four Season’s “Oh What a Night.”

The resulting bliss seemed to last about fifteen minutes.  Then came the move.  Then came Katie’s failure to pick up or return any of my calls.

Around that time, I recall confessing my love for Katie to my older sister Teri, along with the rotten feeling of being dumped.  As I expressed my unrequited love, my older sister could have taken that college admissions director’s approach and pantomimed the gagging symbol pose that someone strikes in an overly saccharine moment.  Armed with an adult’s experience, and development, Teri easily could have said, “Tom, this is just puppy love, you’ll get over it!”  Mercifully, that is not what Teri said.  In actually, What she said was nothing.  What she did, was hug me as I quietly cried.

In this Sunday’s first epistle, (Acts 2: 42-47) I found myself reading with a jaundiced eye similar to that of the college admissions director cracking wise about quaint adolescent reactions to service trips.  I noticed the enthusiastic, almost infatuated tone that the writer of Acts took in painting the picture of the early faith community.  In this telling, each meal wasn’t just tasty, or full of good conversation, it was “full of exultation!”  The phrase, “[the disciples] enjoyed the favor of all the people” calls to mind something that Taylor Swift, Justin Bieber, Chance the Rapper, or Beyonce could only dream of.  In our current days of dystopian novels and movies, the picture-perfect community that sold all their possessions, and shared everything in common made me want to say… “Pu-leez!  Just wait a couple of weeks you Acts of the Apostles Community.  Pretty soon you’ll have your disagreements.  Pretty soon you will be agreeing with Saint Francis of Assisi’s assessment that life in community is where you can always find the cross.

But here on the second Sunday of Easter, what I find myself reflecting on is the importance of older mentors and community members honoring the holiness of youthful infatuation.  Rather than judging a high school student’s common response to service (i.e. “I’m the one who ended up being served”), it is better to view this kind of comment as a kind of spiritual and moral Apgar score.  It is not so much a trite cliché, as an archetypical benchmark signaling that an important milestone has been met in a young adult’s spiritual and moral development.  A really wise mentor looks for this response and celebrates it when it shows itself.

Similarly, my sister, who had crossed the threshold of young adulthood, manifested a spiritual wisdom in simply remaining silent, and honoring the experience of her infatuated little brother’s broken heart.  Every youthful infatuation contains at least a whisper of a holy desire to merge with the One, the True, the Good, and the Beautiful.  Infatuation is not a problem.  The problem comes in when we try to hold onto this passing phase as it makes way for the seasoned kind of love that resides in convictions, decisions, and the will.

The truly elite spiritual masters among us never ever look or sound elite.  They are able to savor each step of the journey with their less developed brothers or sisters with a heartfelt empathy.