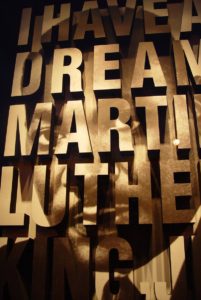 Before there was Taylor Swift, there was Justin Beiber, before Justin, there was Zack Efron, and High School Musical, and all the rest, Annalise, developed a brief, but charming obsession with all things Elvis. On precisely this weekend more than a decade ago, my daughter’s fleeting little fixation resulted in a family MLK-weekend-getaway to Memphis, Tennessee.

After the required visits to Graceland and Sun Studios, our family spent the afternoon of Martin Luther King Day at the Lorraine Hotel, the site of Dr. King’s assassination, and now the National Civil Rights Museum. It struck me at one point on our tour, that for all of the dissimilarities between “The King of Rock ‘n’ Roll, and Dr. King, the leader of The Civil Rights movement, there was one basic thing these two men shared in common. Both of them found themselves swept up in a tide that was not of their own making.

The young Reverend King was known to be an inspired preacher. His keen intellect and sermon sensibilities had been honed in both the university and the pulpit of his local church assignment. One day a woman’s intolerance of foolish Jim Crow bus laws set in motion a chain reaction of events that eventually thrust Doctor King onto the national stage as a moral leader and civil rights spokesman.

I heard the story once of a man whose car ran out of gas on a country road right at about dusk. He noticed a farmhouse about a mile and a half up the road and made his way to it. He arrived just as the darkness had settled in for the night. After explaining his circumstance, the hospitable old farmer who answered the door gladly offered to lend him a filled gas can and a flashlight. The motorist smiled with relief until he switched on the flashlight.

The farmer, noticing the frown that had settled on the man’s face, asked what was wrong. The visitor replied, “Well, I’m grateful for the gas, but I noticed the beam of this light only stretches a hundred or so feet. I’m at least a mile and a half away. I’ll never be able to see my way to the car.” The farmer patiently explained that after the traveler had gone one hundred feet, that the light would provide a further one hundred feet of illumination. The farmer assured his visitor that, by one hundred foot increments, he would eventually arrive at his destination.

The young preacher, Martin, did not have enough light to see down into the future. Martin, who left the seminary in the 1950’s had no way of seeing that his oratory gifts would transform a whole nation’s culture and future…that one day, his actions would result in the dismantling of “White’s Only” rules, the universal right to vote, and eventually, the ascent of an African American to the highest office in the land.

This Sunday’s Gospel (John 1: 35-420) told the story of how Andrew, and his brother Peter met Jesus. They had no way of knowing that their decision to “come and see” where Jesus was staying would result in their leaving nets, and boats, and parents, and would eventually result in the formation of a worldwide movement stretching to our own time.

None of us is given light to see exactly how our lives will unfold. Those who hold spiritual convictions believe that something miraculous is always just around the corner. The Kingdom of God is at hand. And so, when we let go of our own personal nets, and offer ourselves to God, our lives, our talents, our weaknesses, and our history too (including the failures and successes) are swept up into a plan not of our own making.

This Sunday’s Gospel selection invited you and me to take up the flashlight of our own personal spiritualities (eg. scriptures, holy writings, meditation, contemplation, gratitude practices, sacraments, self-reflection, service, encounters with nature, initimate relationships, works for justice). Armed with these tools, regardless of where we find ourselves right now, like Dr. King, we step forward and walk for just as far as our light takes us for now. We trust that when we get to the edge of the darkness, that God will provide us the necessary light we will need to discern the next stretch of the road that lies just ahead.