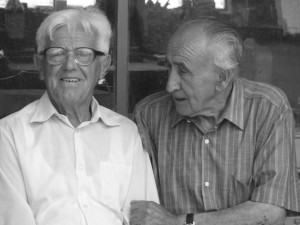 Up until this time, it had never happened to me. But here it was, 100% verifiable, mathematical certitude about a huge life’s decision. I imagined that Albert Einstein must have felt the same way when the elaborate chalk etchings on his black board kept coming out to “e =mc2.” You see, no matter which way I worked the equation of my life, the product at the end kept coming out the same: “Tom & Lisa; Tom & Lisa; Tom & Lisa.”

I understand that it took a few years for the community of astrophysicists to share in the enthusiasm of Einstein’s “Eureka!” moment. The unorthodox nature of his conclusions struck many of his colleagues as just a little too (ahem) out of this world. I guess that’s how it was for Lisa. Like those skeptical scientists, it took her two years longer than me to arrive at the conclusion that the molecules of our lives were destined to form a compound.

When the clock showed that we were T minus four months until launch time, our marriage countdown hit a glitch. Over the last year, a respected colleague had agreed to work on an idea of mine. Collaborating with an, intelligent, attractive woman, whom I had admired for years, was deeply satisfying and affirming. The problem was, that it was beginning to feel just a little too satisfying and affirming.

I was noticing that, more and more of my workday was beginning to revolve around my meetings with this colleague. When I became aware of the gravitational pull this relationship was exerting, I did what I thought any self-respecting counselor would do. I decided to share this little piece of chaos with my fiancé. Despite utilizing all of the best graduate school recommended communication techniques that tuition could buy, I only succeeded in inviting Lisa to a prolonged session of freaking out with me.

Later that weekend, in the midst of a friend’s bachelor’s party, I let a couple of married buddies in on my premarital snag. To my surprise, their first reaction was laughter. Next came a cascade of marital wisdom. “What? You told that to Lisa? It took you thirty-three years to get a good woman, and now you’re trying to chase her away? What do you think friends are for? You should have come to one of us first! Here’s what we would have told you. Feelings come and feelings go. It’s normal to find your heart fluttering around somebody from time-to-time. Quit worrying about that! It’s what you do with those feelings that matters.”

After a series of questions, and several kicks to my backside, my course of action was crystal clear. I had to limit my time with this colleague to exactly what it took to get the project done. I then made a resolution that has served me well through the course of my marriage. I would make a regular practice of sharing at a deep level with trusted and wise male friends.

This Sunday’s Gospel told the story of a woman caught up and then simply caught in adultery (John 8: 1-11). The men who apprehended her were decidedly different than the guys I spoke with at the bachelor’s party. These church leaders could be described as a community of condemnation. Jesus represented another approach approximated by my friends on that night twenty three years ago. In his disarming words, this woman simultaneously encountered non-condemning care and solid, hind-end-kicking wisdom. “Neither do I condemn you. Go now and do not sin any more” (verse 11).

In this short passage, a woman’s worst secrets were exposed. The paparazzi flung the door open on her worst vices. But when she was brought before the Master, brutality was replaced by compassion. What was in the darkness was now placed before the Lord of Light. I imagine that, in the warmth of his care for her, she could begin to explore how she had gotten herself into this mess, and how she could keep from falling back into it.

Who are the people in your life who you really allow to know you? Who, like Jesus in this week’s Gospel, has the permission to simultaneously see the worst in you, and therefore, call out the best in you? Are you willing to act with courage? Could this be the time for you to take a risk, and let yourself be known? Is it time to deepen a friendship so that you can more intelligently and decisively become who God is calling you to be?