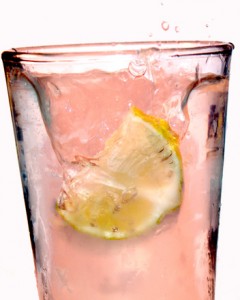 From an eighth of a mile away, I could just make out a clump of childhood activity on the busy, thirty-five mile-per-hour end of our neighborhood street.  Gathered around a card table were three entrepreneurs, aged three, eight, and eleven, seated next to their seventeen-year-old baby-sitter/supervisor.  A pitcher of pink lemonade sweated in the 5:30 p.m. evening sun next to a small pillar of waxed, Dixie paper cups.

A sign decorated with artistic representations of lemon slices, and glasses adorned with tropical umbrellas proclaimed a price-point of twenty-five cents per cup.  As I drained my six ounces of the cold, pink, sugary liquid, I gazed into a Solo cup occupying a central position on the card table.  A spiral of coiled cash filled the container.
“How much have you guys made today?”  The tone of incredulity in my voice stoked my kid’s capitalist enthusiasm.   “More than ten dollars!” my son beamed with unconcealed pride.  “That’s a lot of money! You want me to take you to the bank?”  I offered.  “That’s okay dad.”  My taciturn eleven-year-old replied, “We have an idea.” No amount of prodding and prying could unseal anyone’s lips about this “idea.”  Not even Lizzie—who at three years old, was usually my most reliable informant—could be turned.  This mystery idea must have been a powerful motivational engine.  It propelled my children to set up shop through the rest of the dog days of June and July with the same lucrative results.
Somewhere around Independence Day of that year, Annalise and John Harry began asking cryptic questions about their parents’ work schedules toward the end of July. After negotiations, they persuaded Lisa and me to block out exactly one work-free night and day.  We were told that an overnight bag would be needed.
After work on a Monday night, our car was loaded with the required bag.  Blindfolds were tied around our respective faces as we were shoved into the backseat of our van.  The baby sitter, with whom they had plotted and planned, strapped herself into the driver’s seat.  Fifteen minutes later, Lisa and I were led, one hesitant, blind-folded step-at-a-time across what felt like cobblestones.  When the cloth was removed from our eyes, we stood blinking in the glare of light provided by crystal chandeliers in a fancy Clayton hotel’s lobby.  “Happy Anniversary!”  our kids and baby-sitter beamed.
The concierge, who had taken full measure of what was going on, immediately upgraded the room my kids purchased with their lemonade money into the fanciest, most romantic room in their fancy, romantic hotel.  A complimentary bottle of ice-cold champagne accompanied us to our room.
On the way out of our suite, my son informed me that we could “kiss all we wanted.” My eleven-year-old hastened to add, “but after we’re gone please!”  They also informed us that they would be back in the morning (after 10:00 a.m.) to swim in our room’s heart-shaped Jacuzzi.
On the next day, after a leisurely breakfast, we slid our key, and opened our door to find that they had made good on their promise.  Nestled in the bubbling hot water were three children and their baby-sitter sporting foam beards.
This Sunday’s Gospel passage (Luke 12: 13-21) warned the believer to avoid greed in all its forms.  The key to happiness does not lie in one’s possessions.  Rather, happiness consists in being “rich in what matters to God” (vs. 21).  Several years ago, the eleven, eight, and three year-old versions of my kids provided Lisa and me with a parable in what being rich in what matters to God looks like.
I used to think that money itself was something evil.  I had known too many who were compulsive in their relationships with money.  Their basic underlying assumption was that “there is not enough.”  Mostly, they believed that “they” were not enough.  This foundational misperception led them to compulsively seek more without enjoying the “more” that they acquired.  I have come to see that the spiritual disorder of greed, like so many other vices is fed by a basic lack of trust in God’s abundance.
Money itself is not evil.  It is nothing more than a humble tool meant to serve us (not the other way around).  As Annalise, John Harry, and Lizzie exercised their entrepreneurial muscles, they demonstrated an innate sense of how a spiritually informed person is supposed to relate to money.  Their scheming, dreaming, saving, and eventual spending showed that they understood that ultimately, money is to be intelligently placed at the service of loving.
Where does your treasure lie?  How is your money being placed at the service of love?

One Reply to “Putting Money in its Place”