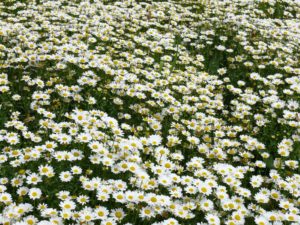 On sleepy Seventh Grade legs, I stumbled out into the kitchen klieg lights that glared over our family’s huge Formica breakfast table.  I expected the usual morning fare of bacon, eggs, and 1970’s pre-wheat-bread toast.  Instead, heaped upon our unbreakable Melmac plastic plates sat a mound of emerald-colored alien brains next to long, tall glasses of something that was obviously squeezed from a large, green, lactating mammal. “Happy Saint Patrick’s Day,” my 1/2 German, 1/2 Irish mother proclaimed matter-of-factly as she stuffed Saint Patrick’s Day lunch food into paper bags.  Reluctantly, my brothers and I hoisted green fork-fulls of dyed scrambled eggs into our less-than enthusiastic mouths, while washing them down with great green gulps of dyed milk.

This was the same mother who purchased a bucket full of permanent markers and distributed them to a basement full of teenagers.  Where others saw unpainted plywood walls in an unfinished basement, my mom saw a canvas.  This was the first of more than a dozen parties where teenagers were encouraged to practice their skills at legalized graffiti.  For the next fifteen years, our basement walls became the repository of an accumulation of semi-clever adolescent aphorisms, and earnest, if fleeting, confessions of teenaged fidelity (“Rick and Marianne 4-ever,” or at least until graduation).

One year dad won a sales incentive trip to an upscale resort in Scottsdale, Arizona.  To fit in with the women who regularly frequented such tony resorts, Mom purchased a wig intended to give her a kind of trendy, Twiggy-chic look.  Like a model strutting down a runway, she sauntered along the poolside with her Jacqueline Onasis sunglasses, obviously listening to some hidden soundtrack from, “Diamonds are a Girl’s Best Friend.”  Suddenly the reverie was broken by one of her sarcastic children shouting,  “Hey, mom’s wearing a wig!”  “Mom, throw that thing into the pool so we can dive for it!”   An avalanche of semi-clever remarks drove her from the pool like a bee-keeper whose swarm had suddenly turned on her.  Back in the room, her attempts at staying angry were thwarted by my brother Phil, who had a knack for making her chuckle so hard that mid-lecture, laugh tears were streaming down her face rather than the sorrow tears she intended for her ill-behaved children’s.

Each year, Mother’s Day provides an opportunity to contemplate the feminine face of God.  Over the millennia, Catholic theologians, who have been mostly men, have viewed God through a decidedly masculine lens.  Thomas Aquinas invited the Christian community to stand in awe before the Unmoved Mover whose essence is existence.  Augustine of Hippo marveled at the divine architect who crafted something so fine-tuned as the human intellect, capable of apprehending the true nature of a thing in the time it takes to snap a finger.

Perhaps Mother’s Day is a good day to view the Kingdom of God through the often-neglected lens of Beauty.  Have you ever stopped to contemplate an autumnal mid-western woods?  God could have constructed a process where leaves simply dropped from trees at the end of their life-cycle.  Instead, like some mischievous mother on Saint Patrick’s Day, God dyes leaves in gaudy pluriform colors.  What does that say about the nature of God?

The best-selling author/MIT scholar, Peter Senge, has pointed out that we are only now emerging from that most masculine of all ages, The Industrial Age.  During the last one hundred and fifty years, human productivity has been measured against the criteria of speed and uniformity.

By way of contrast, God’s economy elevates beauty and uniqueness.  No two blades of grass are the same.  Reproduction does not take place on an assembly line.  Rather, great splashes of color, and perfume attracts both the senses and the bees.  What does this tell us about the nature of God?

G.K. Chesterton hinted at the femininity of the divine face when he asserted that God did not create a world covered in daisies.  Rather, God created one daisy, and fell in love with it, which necessitated the creation of another, and then another, until the world was covered in daisies.

This Mother’s Day, as you take the time to appreciate your mom, grandma, aunt, or wife, can you take just a moment to contemplate what the nature of her beauty reveals about the true nature of God?

One Reply to “Our Mother Who Art In Heaven”