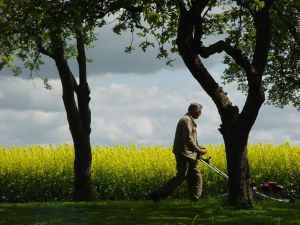 A whole puddle of sunlight had somehow managed to splash through our kitchen window and pool up on the linoleum floor.  Something about the way that the yellow beams illuminated the otherwise invisible particles floating in the air was having the effect of a hypnotist’s swinging amulet.  I was completely mesmerized.  I dipped my miniature, three-year-old hand into the cascading light and dancing dust, bathing it in a glove of warm, kitchen morning yellow. The combination of warmth, refracted light, and pirouetting particles convinced me to immerse my whole body into that light pool.   As if inserted into an intricate country-dance, I bobbed and weaved with the floating, illuminated particulate matter.

In my reverie, I had forgotten, (in the way that only three-year-olds can) that I was not alone in that kitchen.  A harsh, staccato, voice broke into my playground transforming it back into a magic-free, food preparation zone.  I followed the sound waves back to their source.  There I discovered my mother washing dishes while passionately arguing with someone.

I searched for the 1960’s clothesline phone cord that frequently stretched across the kitchen.  Mom was not on the phone.  We were all alone.  Like a shadow boxer, mom was sparring with an invisible opponent.  I concluded then and there that adults are a strange species.

On another sun-drenched morning a couple of decades later, I had donned my grass-stained, lawn-mowing sneakers.  After coaxing myself awake with a little caffeine, I roused our reluctant old Sears & Roebuck mower by pouring a little gas down the throat of her parched carburetor.  Having defined the first section of space to be cut, I began tracing lawn mower sized lines back and forth across the pitch.

Normally, the combination of fresh morning air, sunshine, and the baritone drone of my lawn mower humming a perfect “C” chord, would have inspired me to sing along with the accompaniment of my whirring instrument.  On sun dappled days like these, the neighborhood swallows would swoop in for a morning snack of insects freshly kicked up by my whirring blades.

Normally, I would have stared in amazement at God’s little acrobats.  Diving, swooping, loop-de-looped forked wings and tails would have provided an air show while the endorphins of my mower’s high started to kick in. Normally, on days like this, I would feel like a fossil fuel enhanced Saint Francis as I sang and led my parade of aviary life around the acre of our rural back yard.  On days like this, I felt what I imagined golfers must feel except that I got something done, and actually exercised in the process.

This was what normally happened on such glorious summer mornings.  But not on this summer’s morning.  On thismorning, I carried with me the gray and stormy memory of my boss who had done me wrong.   On this day there was no singing.  There was no awareness of anything so frivolous as silly birds in flight, or blue summer skies, or gentle morning breezes.  If a three-year-old had been playing nearby, he would have noticed the sound of my harsh, staccato voice.  He would have heard me passionately responding to the invisible boss that I carried with me in my head.  I imagine that any observant three-year-old would have scratched his head and mused, “Adults are a strange species.”

In this Sunday’s Gospel (Luke 21: 5-19), Jesus predicted that, we, his followers, would experience every manner of conflicts and persecution.  He advised us to forget about preparing our defense in the face of such moments as these.  This little piece of practical wisdom makes me think that Jesus must have observed a lot of adults by the time he spoke these words as a thirty-something man.  Perhaps it was his divine nature that allowed him to preserve the in-born common sense of a three-year-old.  It seems that most of us shed that wisdom by the time we cross the pseudo-sophisticated threshold of adulthood.

To spend time and energy preparing defensive statements for those whom we perceive to be persecuting us is to expand the space of persecution in our lives.  Anytime we allow ourselves to play reruns of old conflicts in our minds, or to anticipate future ones, we diminish our capacity to experience resurrected life here and now.  Whenever we take our nemesis home with us, and allow them to rent space in our head, we are actually temporarily renting a space in our own personal little hell.

This Sunday’s scripture seems to say, “Life in this day and age is hard enough all by itself.  Don’t give more space to what persecutes you than is absolutely necessary.”  In this passage, Jesus promised that He would give us what we need during those inevitable moments of persecution.  Even if the winning rejoinder He offers is simply His own language of silence, it will be so much more eloquent than whatever it was that you would have concocted in your imaginary debate at the kitchen sink, or in your back yard.

This week, notice when your self-talk turns to fruitless persecution preparation.   Allow Christ to help you change the channel to the peace of resurrected living available right here and right now in this present, grace-drenched moment.