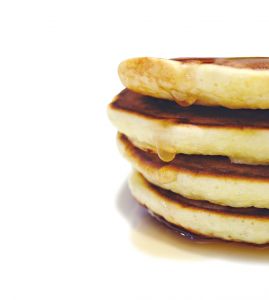 Almost a decade ago, I was granted a glimpse into the inner world of my nine-year-old daughter, Annalise.  While visiting Annaliseland, I discovered  what love looked like, smelled like, sounded like, and tasted like for her.  Love in Annaliseland  sounded crackly…like eggs breaking open on the edge of a glass bowl.  Love sounded sloshie, like a fork whisking together yolks, whites, whole-wheat flour, a touch of salt and cinnamon, milk, baking powder, oil, and plenty of brown sugar.  It smelled like butter soaking into a dry skillet.  It looked like bubbly batter metamorphasizing into pancakes.  Love tasted like maple syrup soaking stacks of whole-wheat/chocolate-chip flapjacks and ice-cold milk clearing the way for one more sticky mouth full after another.

For almost two decades by now, each morning, before assuming my professional role as, “Dr. Tom Counselor and Consultant,” my kids have known me by another name:  “Dad the Breakfast Guy.”   My short order specialties have included anything a human being can do with an egg, fatty pork products (bacon, sausage, B&G), crepes, French toast, oat meal, waffles cinnamon rolls, and something I call, “Jacked up Flap Jacks” (a healthy pancake concoction guaranteed to improve sports performance).  The fact is, I secretly enjoy this spatula-toting alter ego.  What I didn’t grasp until a busy Saturday morning almost a decade ago, was the meaning that Annalise had ascribed to Breakfast Guy’s creations.  I discovered that meaning when Breakfast Guy failed to show up on his regularly scheduled weekend shift.

On that Saturday all those years ago, my alter ego was feeling a little lazy, and so I determined to throw together a quick morning meal.  I remembered back to the morning fare I served up in my bachelor days.  “A breakfast from Battlecreek, Michigan is what’s needed here!”  I told myself.  It was “Kellogg time” at the Wagner household.  Unfortunately, my household is used to Breakfast Guy, and so supplies of cereal are not available for moments like this.  Somewhere behind the large bottle of canola oil a stale old neglected box of Cheerios was gathering cobwebs.  I poured out the ancient “o’s” and doused them with milk.  I hoped the sogginess would hide the telltale signs of past-due-ness.  I called my daughter downstairs.  She informed me of something that my alter ego would never have forgotten.  Annalise does not like fresh Cheerios, much less these fossilized replicas.

As I settled down to my coffee and newspaper, without looking up, I informed her that if she didn’t like it, she could find something else to eat in the fridge.  Moments later I looked up to find that she was taking an unusually long time to smear jelly on a piece of bread.  A closer look revealed some tears rolling down her cheeks.  When I asked her what was wrong, she attempted to mask her sadness, “Oh nothing.  This day just hasn’t started out right.”   That’s when it struck me.  Weekend breakfasts together held a much deeper meaning for my daughter than mere caloric intake.

The next day I made sure that my alter ego, Breakfast Guy, was up a half an hour earlier than usual.  Before anyone else stirred, he cooked a pancake breakfast for one, retrieved the morning funnies from the driveway, and assembled a breakfast-in-bed tray for my nine-year old.  As I woke her up and nestled the tray in her lap, she asked, “What’s this for?”  I let her know that it was “Annalise Appreciation Morning.”  The look on her face told me that I had learned my lesson.  This breakfast was not too hot, nor too cold, it was just right!

Embedded within the Gospel selection for this Sunday (Mark 1: 21-28) was the line, “He taught as one having authority, and not like the teachers of the law.”  The weekend breakfast lesson from all those years ago helped me to reflect upon the true source of authority.  If you search your history to locate those people who have held real “authority” in your life, you are likely to uncover a common thread running through your relationships with your authority figures.

Real authority is based upon love.  Good “supervisors” know how to provide both carrots and sticks to get employees to follow the rules.   “Leaders” endowed with a natural authority demonstrate real care for the dreams and aspirations of their employees, and consequently, their employees always seem to go the extra mile for them.

If you want real authority in someone’s life, figure out what care looks like, sounds like, tastes like, and smells like for this person.  Then go out of your way to express your care in their love language (which may not necessarily be your own).

Imagine that any time you express unmitigated, over-the-top, unconditional love for someone, you have just invested precious resources in an account.  Understand that when you have to exercise authority in that same person’s life, you are drawing on this account.  The measure of love that you have invested, will determine the amount of authority that you will be given in that relationship.

One Reply to “Real Authority”