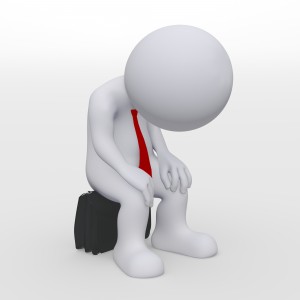 Dad did not articulate this business philosophy so much by the words that came from his mouth, as the way he lived his life.  As he created, sold, and dissolved several businesses, he expressed this philosophy over and over again.    Through his lifetime, dad made a fortune, lost a fortune, and somehow managed to claw his way back to financial solvency.

Dad didn’t always live by the Machiavellian maxim, “I’ll scratch your back, and then you’ll scratch my back.”  When he died, I found an old 1960’s business journal that featured dad and his success entitled, “How to Succeed in Business by Really Trying.”   Printed on those slick black and white pages were photographs of a handsome and ambitious young man that the directors must have had in mind when they cast Jon Hamm in the HBO series, Mad Men.  In that interview, the young, idealistic version of my dad said nothing of the dark art of  “obligating people.”   No, according to that interview, in those days, he believed that the keys to his success included:  (1) the ability to quickly assess a customer’s needs; (2) the ability to work harder than anyone else to meet those needs quickly and efficiently.

What then, accounted for the mission, vision, and values makeover from service of a customer to the ensnarement of a customer in a sticky web of strings-attached-kindnesses?  I believe that the answer can be found in the late 1960’s, and ‘70’s, when dad procured several large contracts with the State of Illinois.  When one does enough business in Rome, one begins to think and act as the Romans do.  Illinois politicians have always been pro’s at quid pro quo’s .

One of the many problems with this way of doing business, is that Machiavelli often follows one home.  In our childhood, when it came to my dad’s acts of generosity and kindness, my brothers and sisters and I were like an audience watching a stage production ofPeter Pan.  We were always on the lookout for the location of the invisible strings.

I knew when dad co-signed on my 1970 Malibu, that somehow, some way, I would find myself tethered to one of his demands.  It didn’t take long for the marionette string to twang as I felt that old familiar tug.  Without thinking, I told him that I was looking forward to utilizing my new vehicle for a post-high school float trip with some of my buddies.  Trouble was that in addition to helping me with my car, dad had also helped me get a job with the State that summer. When he discovered my vacation plans, he somehow got the notion that his son taking two days off of the job, reflected poorly on him. He immediately forbade me to go.  A standoff ensued with me telling him that “I was going, and there was no sense talking about it.”  I had thought that the conversation had ended in a stalemate.  Dad had one more move up his sleeve.  In the middle of the night, he came by where I was staying, and took the plates.  He called to let me know, “You can’t drive that car with no license plates.  You have to go to work now.”  Checkmate!

In this Sunday’s Old Testament selection (2 Kings 5: 14-17), the reader caught up with Elijah’s anointed successor, the prophet, Elisha.  In this selection, a powerful army commander of a pagan kingdom sought him out to be healed of his leprosy.  Cured of his ailment, the commander sought to shower gifts upon Elisha. Having been mentored by the second best prophet in Israel’s history, Elisha steadfastly refused to accept any gifts.  Elijah must have taught him how easily a prophet can be ensnared by the strings-attached generosity of kings and armies, rendering the prophetic charism impotent.  There are some theologians who believe that when the Emperor Constantine made Christianity the state religion, that the prophetic charism of the church was co-opted, and neutered.  From this perspective, the church must be careful when it is too richly blessed by any ruler, political party, or government.

Within moments of hanging up the phone, I immediately knew what I had to do.  I called my buddy, Dan, and had him follow my suddenly illegal blue Malibu to my dad’s office.  While Dan waited in his car, I opened my dad’s door, tossed him the keys, and said, “I don’t want this car anymore.  It’s yours now.”

As an adolescent, my dad unwittingly taught me the lesson of Elisha.  There are some gifts not worth the price of receiving.  By the time I was eighteen, I had learned that the gift of psychological freedom is priceless.  Good healthy relationships grow best in the soil of freedom.  Any spirituality worthy of that name will more and more and more lead the practitioner away from compulsive guilt and the things that tie people up, and toward more and more and more freedom.

Who in your life consistently gives to you in a no-strings-attached way?  Do you receive their unconditional love with respect, and gratitude, or do you merely take from them?  When you give to family, friends, or colleagues, do you check yourself to see if there are any ulterior motives?  Are you moving more-and-more toward psychological freedom as the years continue?  Is there something that you need to surrender to receive more freedom?  What is helping you with that project?